Watercooler Reviews | “Loki” Round Table: Episode 6, “For All Time. Always.”

The Loki season finale continued to throw around one too many Wizard of Oz references, but was pretty well executed, and instead of trying too hard to wrap things up in the allocated number of episodes, the show has officially gotten the go-ahead for a second season – a development I am supremely excited about. Not only as a cemented fan of the series, but as a writer, it’s a respectable move to prioritize a story that way, as long as one can pull off the necessary funding and support from the network or streaming service in question. I admired Orphan Black for a similar reason; instead of beating the dead plot-horse into the ground in the hopes of securing a wider and wider fan base and profit, they told the story they wanted to tell and ended the series after five seasons.

Anyway, back to Loki. 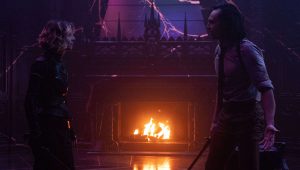 As we all recall from last week, Loki and Sylvie successfully enchanted the gargantuan cloud-beast Alioth and were well on their way to whatever lies beyond the end of time, which turns out to be none other than Miss Minutes. Well, kind of. Really, “He Who Remains” (a.k.a. “Kang,” for hard core Marvel fans – or at least a variant of him) lives alone in a citadel at the end end of time, after creating the TVA to stop the full-scale multidimensional war between himself and all the versions of him, some of whom had better intentions and some of whom had far, far worse.

Meanwhile in woke TVA agent land, Hunter B-15 and Mobius have located Renslayer on Earth, leading her life as a teacher before she became the TVA’s judge. While Hunter B-15 takes on the task of opening the eyes of her fellow agents, Mobius guards Ravonna, who has a surprisingly honest, if not depressing line: “Only one person gets free will. The one in charge.” We don’t see much of our favorite agents, given the screentime devoted to He Who Remains’s backstory, but we’ll come full circle when we get to the last minute and a half of the finale.

Whichever variant of Kang “He Who Remains” is or is not, he has a heck of a lot of explaining to do – and he does, giving a pilot’s worth of exposition over the course of the episode and leading our Lokis to arms against each other as their morals clash. Turns out, He Who Remains is a scientist, from a far more advanced Earth than Loki has just vacated after the battle of New York, and after unlocking the secrets necessary to access the multiverse, discovered countless versions of himself, who caused the aforementioned full-scale multidimensional war. The TVA’s “Sacred Timeline,” which has sounded like garbage since the moment it first came out of Owen Wilson’s mouth, was his relatively successful attempt to keep the evil variants at bay, forcing an authoritarian rule over the universe for the sake of its protection. Sylvie, believing He Who Remains to be a liar, is hell bent on killing him and releasing the TVA’s grip on everything, multiversal war or not. Loki, for once the level-headed, proves his character development has come full circle as he forces her to question her instincts: “Can’t you see this is bigger than us?” As they fight, their strange relationship comes to a head and they share a kiss (weird as it is, I don’t think I’ve ever seen Hiddleston play a scene as Loki as emotionally as this one) before Sylvie uses the TemPad she stole from He Who Remains to shove Loki straight back to the TVA. I can’t even begin to imagine how sick he is of seeing those hallways, based on how sick I am of seeing them.

Knowing he hasn’t convinced Sylvie not to go forward with her plan (which she does, killing Kang straightaway and thus forcefully rejecting his offer for her and Loki to take over the TVA as its “benevolent rulers”), Loki seeks out Mobius, and finds him and Hunter B-15 seemingly researching their next moves in the Multiverse Library of Congress, or whatever the actual name is. Sputtering like a madman to try and convey everything he’s got to say in the three seconds he knows he has to say it, he’s dumbfounded when Mobius and B-15 have no idea who he is. Horrified, he realizes he’s been sent to an alternate version of the TVA, with a larger than life statue of the man he assumes has just died towering over him. Whichever variant of Kang he’s about to encounter here – probably the Kang himself, given his history in the comics as a major supervillain – it can’t be good. 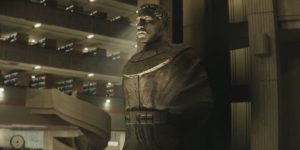 There’s no world in any multiverse where this is not a direct lead-in to Doctor Strange in the Multiverse of Madness, as WandaVision did. That film is shaping up to be quite something, with all the MCU characters that are about to be involved. My only complaint here is that the finale for this show traded the fantastic narrative structure of each of its preceding episodes in service of the larger MCU story. It needed to happen to some extent to keep the Marvel empire in place, but it didn’t need to do so as completely. It felt a bit cheap, but not enough for me not to have thoroughly enjoyed it. And, with such a massive cliffhanger, I’m desperate for season 2 already, and to learn where it will fit or pick up after we learn what the hell Doctor Strange has been up to in the meantime.