I really liked this episode. Perhaps I’m biased as it had a very Doctor Who-ish vibe to it, which I am admittedly a big fan of. Nevertheless, getting away from the somewhat monotonous tone of the preceding two Loki episodes worked wonders for the series. The third installment, Lamentis, worked in a way similar to that of the film Stowaway (which I reviewed for Chicago Film Scene a few months back), in that nothing really happens, but we get such an intricate look into our main characters that we feel as plot-full as if we’d just watched a documentary.

After following his Variant through an interdimensional portal at the end of the second episode, our Loki finds himself back at the TVA, where he seeks a few answers from his potentially more clever counterpart. Unfortunately for Loki 2 – and she goes by Sylvie now, a possible nod to the comics and convenient way to distinguish between characters for the writers – Loki steals her TemPad, which she had in turn stolen from the TVA, and saves his own skin by transporting them both off to hide in another apocalypse. 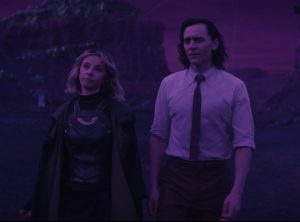 And so it begins: the first in a series of ill-fated decisions made by Loki lands both Variants on Lamentis-1, which apparently is the apocalypse to end all apocalypses. Why Sylvie had this one saved as a TemPad teleportation go-to when it was so dangerous is another matter, but nevertheless she is furious with Loki for sending them there and interrupting a plan that was “years in the making. Years.”

With the TemPad out of power, the scrappy duo gives off the air of two teenagers lost on a weekend trip without their cell phones, and find themselves frantically searching for a power source massive enough to get them the hell off the doomed moon. The back and forth between Sylvie and Loki, each knowing not to trust the other, is a nice playful undertone to the Drama™ of the episode, especially as they bicker about which magic is acceptable to use in what situation. As they grasp at one straw after another, mostly at Loki’s request as Sylvie seems content to perch herself on various rocks and pout until her imminent death, they figure out that an escape pod – which is destined to be destroyed before it manages to save even a single life – has enough power to boot the TemPad back up. The escape pod, of course, can only be reached by train (big city life, am I right?), and in an unfortunate parallel to real life, the magically-privileged gods of mischief walk straight to the front of the train’s line of those desperate to board, amidst cries of “they’re only giving tickets out to the wealthy!” and “What about us?”

On the train, we are treated to the best scene of the episode, as Loki and Sylvie discuss their somewhat shared pasts. We learn that Sylvie knew she was adopted from the start, Loki is surprisingly honest about his memories of his mother (I think), and both Sylvie and Loki speak of their experiences with loving both men and women. This is a huge step forward for the MCU, as anything other than heterosexual leads and love interests has never really been even hinted at, let alone confirmed. Where Falcon and the Winter Soldier disappointed me by shying away from fully going the human rights route, Loki here took a step back toward my good graces. The show has my attention.

Loki himself makes his second unfortunate choice of the episode, perhaps as a result of an unexpectedly deep conversation (for him), or perhaps not. Either way, a drunken Asgardian gets himself and his cohort quite literally thrown off the train, which completely destroys the TemPad beyond any hope of salvation. This is what I meant when I said nothing really… happens in this episode – it’s a back and forth. One minute our Lokis are following a thread of hope, and the next it is crushed and we’re right back to where we started. But the character development, especially the more personal moments between Loki and Sylvie, make it worth it.

Shocker – as Sylvie finds another rock to settle and brood on, Loki comes up with one final last-ditch plan – hijack the escape pod and ensure that it takes off, which it has never done before. But, as Loki points out, it’s never had two gods of mischief on board before. Not as bad a plan as trying to surprise attack Thanos, I’ll give him that. And Sylvie begrudgingly agrees, still angry with him for the series of incredibly bad choices she’s been forced to bear witness to, but knowing they have no other choice.

Sadly, they don’t make it in time, leaving Loki and Sylvie with no options, and essentially exactly where they were at the beginning of the episode. Another cliffhanger, this time one that could have been very frustrating had the script not been as well-written as it was. There’s really no chance that Loki and Sylvie don’t both survive for at least another episode, so while I don’t quite yet see where this is going, I do hope we get some clarity on Sylvie’s Grand Plan. Altogether a great episode in the third week of this series, and I’m already eager for some answers on Wednesday.