Loki wasted no time in ramping up the action this week as we ended on the cliffhanger that had been speculated about for months prior to the series premiere, even as we were still making our way through every WandaVision enigma and Falcon and the Winter Soldier frustration. But, of course, there’s a lot to cover before we get to that.

We kicked off this week with another example of the apparently significantly more clever Loki’s attacks, this one occurring at a Renaissance Faire in Wisconsin. (Special shoutout to the woman enraged when the TVA agents sent to investigate lack costumes, characters or accents; she’s the most relatable character of the series yet as she half scolds, half pleads, “some of us need this, you know!”) The Renaissance Faire is a fitting locale for this latest TVA agent heist/murder/kidnapping, so long as the mystery Loki is anything like Tom Hiddleston’s version, what with the cadence and (over)dramatic style of speech that has characterized the Asgardians throughout the MCU. 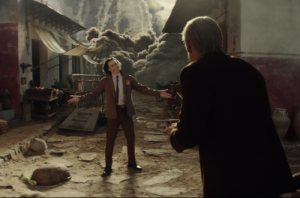 Meanwhile, the newly hired Corporate Loki™ that we know and love is busy learning the ropes of the TVA – now more employee than convict, at least on the surface. He’s even made friends with Miss Minutes, the strange DMV-esque half-alive clock cartoon that most variants come face to face with before their trials, finally learning moments before their demises why they’ve been brought to the TVA in the first place. It’s not long before Loki is sent on his first field mission to provide insight into his infamous Renaissance Faire variant’s thought process, but Mobius quickly sees through his insincerity and sentences him to desk duty. I must say, the whole intergalactic timeline space police thing got old for me very quickly; we’ve seen all of this before in a little series called Doctor Who, especially when Loki drags Mobius to Pompeii of all places to prove his theory that an apocalyptic event counteracts any and all intentional or unintentional attempts to alter the sacred timeline. While that revelation in itself bored me, I admit the idea of hiding within an apocalypse is something only the God of Mischief would have thought of, and what an interesting concept! I loved the playful little glint in his eye as shared his love for being right with Mobius, and, shocker, his theory was indeed accurate, earning him a second chance. A second chance that, granted, only happened because Mobius apparently has some kind of romantic history with his boss. Weird, but okay. 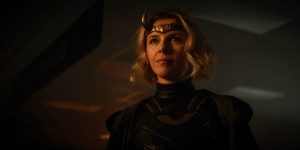 It’s at the end of the episode, during Loki’s second venture as a TVA field agent, that we finally get some kind of payoff for all the “been there done that” space cop stuff. Our Loki finally comes face-to-face with his variant, and it’s Lady Loki. Or maybe it isn’t, but it certainly seems that way right now. As I mentioned right out of the gate, fans had been speculating about this MCU development for quite some time, so while not exactly a shock – feels like it’s impossible for Marvel to truly surprise any of us anymore – it was a delight. Sophia di Martino, if she’s playing the Loki we believe she is, is just as wonderfully chaotic as Hiddleston, though the contrast between them is also apparent. We’ve gotten to see our Loki over the course of two episodes go through some personal emotional growth, which at first I believed to be a necessity to get him more or less up to speed character development-wise with the version of himself that died at Thanos’s hand. Now, however, it seems that this Lady Loki could be the Chaotic Evil foil to Loki’s… Chaotic Neutral? Lawful Evil? Whatever he is, I only hope that the series does not try to turn the God of Mischief’s arc into one of redemption.

Still, for now, I am content with the note episode 2 ended on, as Loki escaped the TVA – yes! – and followed Lady Loki through an open interdimensional portal. I am extremely excited to see what the two Lokis have in store for them in episode 3 and beyond.

Owen Wilson, I’m not so concerned about. Sorry, bud.