If the WandaVision pilot was the wildest thing we’d ever seen and the Falcon and the Winter Soldier pilot was the most predictable, Loki landed somewhere in between. The first thing we can all do is let out a sigh of… not quite relief, because we all know what Loki’s fate was in Avengers: Infinity War. But exhilaration, I suppose, at seeing Tom Hiddleston reprise his role as the God of Mischief at his most mischievous. I haven’t decided yet how I feel about following the adventures of this alternate-reality Loki, one who hasn’t experienced a single ounce of character development since the very first Avengers film. On the one hand, it’s a good bit of fun to have a spinoff about someone who is more straight villain than anything else. On the other, I think we as a Marvel fanbase collectively came to truly care for Loki – his struggles with distinguishing his “good” instincts from his “bad” have been far more relatable than any other Avenger – and it’s really too soon to tell what, if anything, will change for the version of Loki we’re familiar with.

Let’s dive in to the pilot itself, shall we?

As mentioned above, Loki picks up at the end of the first Avengers film. We all remember, of course, the not quite apologetic “If it’s all the same to you… I’ll have that drink now,” from the defeated Big Bad, who is later forced to relive the humiliating moment over and over again in the Time Variance Authority (TVA) at the drop of Owen Wilson’s hat. Note: Wilson’s distinctive voice is SO out of place to me, especially after the phenomenal appearances of Julia Louis-Dreyfus and Kathryn Hahn in Marvel’s previous two television ventures, but I’m willing to give him a chance. After the painful DMV-esque Miss Minutes explanation of what TVA agents are and do, I’m willing to give anything a chance. And speaking of appearances, can you imagine being Robert Downey Jr., and asked to return to the MCU only to film a few more classic Tony Stark One-Liners™? I was nearly falling out of my seat with glee. 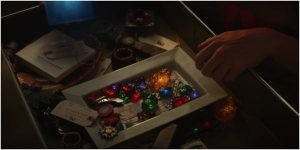 Instead, however, of things going the way we remember and the Avengers off to eat shawarma in some Midtown corner store, the Tesseract falls back into the hands of our newly named protagonist, and he vanishes. One question that rose for me immediately: if the Tesseract escaped with Loki, especially to the TVA – where there is apparently a drawer full of spare Infinity Stones – would Thanos still have gotten his hands on the Space Stone? 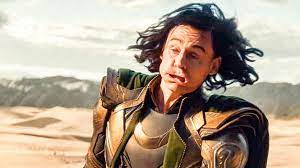 In any event, the alternate Loki only has a few moments of freedom to enjoy before the TVA agents in question arrive to place him under arrest for a different misdemeanor: upsetting the natural order of the timeline. A cross between The Good Place‘s Bad Place and every HR department any of us have ever come in contact with, the TVA is easily annoying enough for us to side with Loki. His trial, unsurprisingly, does not go his way, a nice little comment on the shortcomings of the American judicial system (or perhaps not, but that’s where my mind went). For once, though, I felt this pilot nicely left us with more answers than questions, with enough room to engage the fan base for the rest of the season. 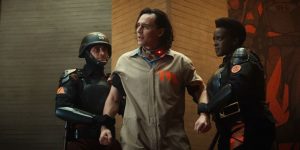 On top the clear competence of the creative team behind the series, it’s very genuinely funny, for a script with a fairly straightforward plot setup. Hiddleston’s comedic timing is as sharp as ever, as evidenced, for example as he faces a self-loathing office worker asking him to “sign here to verify everything you’ve ever said.” I could write an entire article composed solely of jokes from this episode I appreciated, but it’s the scenes between Wilson and Hiddleston that really take center stage, rather shockingly. Who would have ever thought these two would find reason to exist as scene partners? Their interactions bode well for the rest of the series already, though, we should take note that much of their screen time together is interrupted by old Marvel footage meant to recap Loki’s life in the “correct” timeline. It remains to be seen whether the duo will shine as brightly without those interjections.

Still, watching Loki experience his years and years of character development in warp speed, over the course of a single episode, turned out to be a lovely moment I didn’t know I needed. Turns out the TVA, or at least Owen Wilson within it, needs Loki’s help. Knowing our beloved God of Mischief, I doubt that help will come in the form of more therapy, if at all, but we’ll see what tomorrow’s second installment brings to the table. I hope, at the very least, it’s a brand new green cape.

How refreshing to have him back!