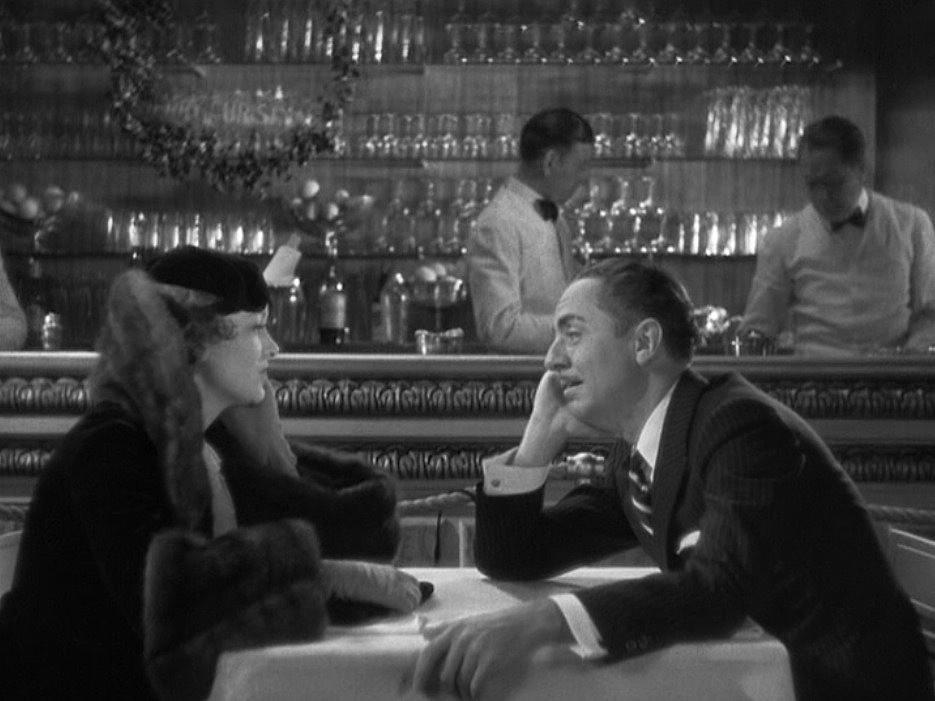 I had a plan! I had a plan for this week. It was Programmed as they say. But after a busy weekend and my desperate struggle to maintain a virtual social life (enough to make you cry, isn’t it?), I didn’t get around to re-watching the OTHER movie I wanted to talk about. So HERE I am, YET AGAIN, scrambling to figure out what to talk about. At least I like the wallpaper. The problem with writing about anything is you have to either know the subject by heart OR re-visit it shortly before taking on the endeavor. Given the facts that the only movie I’ve watched this week was Wes Craven’s New Nightmare and that you’ve read the title of this article, it should be abundantly clear that today I’m gonna talk about a movie I know by heart. I KNOW I know it by heart because I watched it (conservatively) ten times last year. Because I’m cool like that.

I wasn’t planning on talking about W.S. Van Dyke’s The Thin Man (1934) this early. I’ve now covered two movies from the 30’s and both star William Powell. Hell, I talked about The Thin Man IN that article. But it’s just so damn good. The style isn’t flashy, the plot’s not particularly original, and the characters are predominantly unlikable tools. And yet, it establishes a world that I love living in for an hour and a half.

Based off a serial-turned-novel by Dashiell Hammett, The Thin Man diverges strangely from its source material. AS I TALKED ABOUT in my article on My Man Godfrey (which, if you haven’t, go read; it needs the page views), while the text and narrative of the book is predominantly maintained in Albert Hackett and Frances Goodrich’s screenplay, it plays VERY differently than it reads. While Hammett’s lead Nick Charles is very much the witty alcoholic detective as portrayed by Powell in the movie, he has a tough edge to him that is all but absent on the screen. And that’s sort of the gist of the whole affair. It is a murder mystery that is practically ambivalent to the MULTIPLE murders committed within its run time.

That’s a very tricky balance to strike. It can easily alienate the audience, seeing our heroes display such disregard for fellow human suffering. Usually that’s the joke as in movies like Clue: The Movie and Heathers (previously mentioned THIS WEEK in the Beetlejuice article… Go read that one too), but here it’s not. The characters simply have other concerns. It’s a delightful twist on the genre and all thanks to our two leads: Nick and Nora Charles, played by William Powell and Myrna Loy respectively.

The plot is fairly conventional: Man goes missing, family hires detective they know/heard of to solve the mystery, and (spoilers) the detective solves it. But what a detective! And what a detective’s wife! Nick and Nora are a razor witted couple, only matched by one another. They bicker and banter incessantly and, with less talented performers, should be absolutely insufferable. But Powell and Loy’s chemistry was famous. Gossip columns of the day tried to pressure them into actually being a couple, they were that good together. Loy is the straight woman to Powell but neither are as unhinged as the cast of characters they’re surrounded by. And I think that’s the key: Our heroes are the grounding, sarcastic force that cultivate a delightful relationship between them while also anchoring the cartoonish bourgeoisie, cops, and gangsters. They don’t like anyone and we love them for it.

The other remarkable thing about Nick and Nora is, by the end of the movie, we know Dick All about them. Nick is an ex-detective from New York and Nora’s a wealthy heiress from… California? I think? They gleefully drink too much (portrayed here as a quirk rather than a debilitating problem) and they have a cute dog named Asta. That’s it. We don’t know how they met, they’re on vacation so we don’t know what their home’s like, we don’t know why Nick left the force, what Nora was up to before meeting Nick- They tell us Jack and Shit. And Jack’s left town. The Thin Man spawned FIVE sequels with Powell and Loy (again, they were that good) and I’m sure this is all elaborated in those but the shame is it doesn’t need to be. These are two characters so driven by their personalities, their actors’ natural charisma, that we don’t have to know anything about them. To do so would hinder the unpredictable joy. It’s a perfect anti-emotional engagement.

I mentioned earlier that last year I watched this movie at least ten times. That may SOUND like a cry for help… And it wasn’t not… But the The Thin Man is one of those rare addictive movies. You want to spend time with these two leads. Their rhythm, dialogue, delivery, and chemistry is bar none. Say what you will about the rest of the movie but its leads lift it into Sublime status.