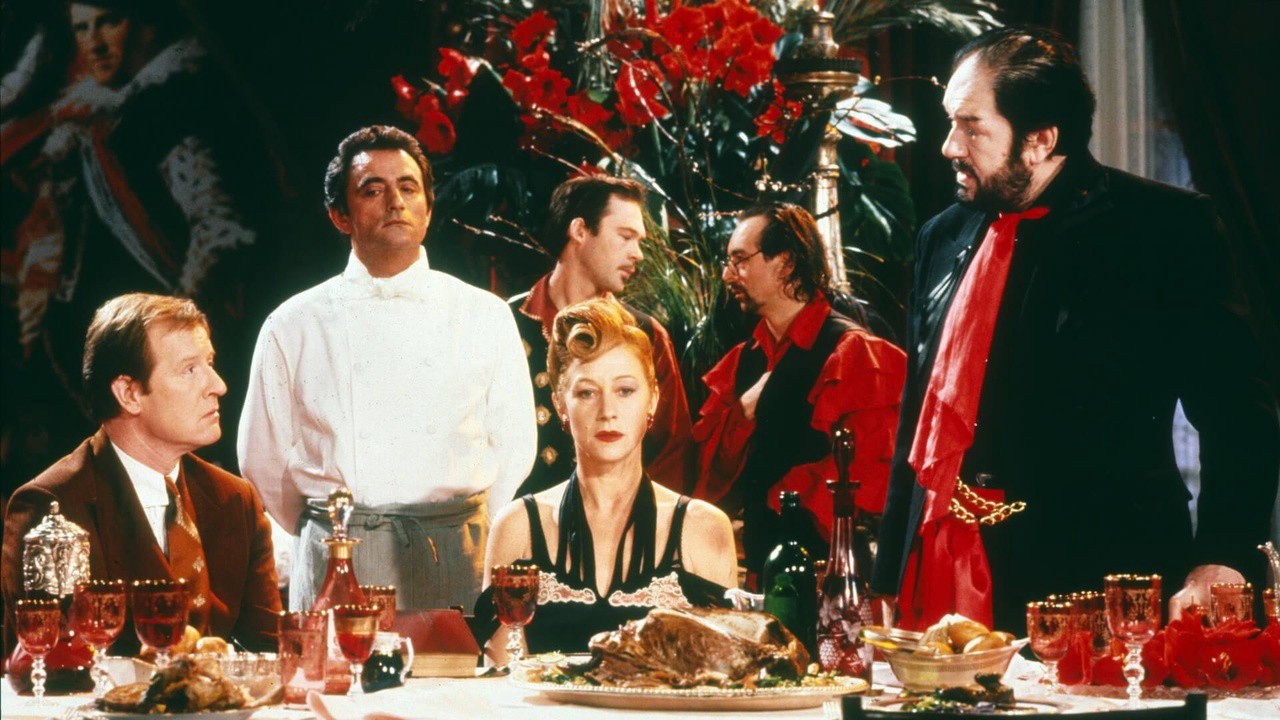 “Pornographic, a savage attack on Thatcher, or both? Or is it simply about a cook, a thief, his wife and her lover?”

I’m back, kids. Where have I been? What have I been doing? Oh, was I gone? You hadn’t noticed. The details are unimportant (and wildly uninteresting). All that matters is I’ve been living in 2020 America same just like you. What a miserable time to be alive. The temptation is there to write about fluff these days. Lord knows, that’s mostly what I’ve been watching. But that’s not what we need right now and if you’re looking for a movie to make you feel better, what we’re talking about today sure as shit ain’t it. This is your warning.

On a day around the middle of every month, the Criterion Collection announces the next wave of movies to be inducted into its catalog. And on a day around the middle of every month, I read this small list of new movies with bated breath. They can be anything: The Princess Bride, Tokyo Drifter, and the complete works of Ingmar Bergman are all part of the Criterion Collection. But such possibilities are not what bates my breath. There is but one possibility I anticipate, long for, and hope beyond hope will show up: Peter Greenaway’s 1989 The Cook, the Thief, His Wife & Her Lover. Last I heard, the only surviving negative of it is in a nonredeemable state of decay. I can’t imagine that’s true but until it’s proven otherwise, I’ve got an old ass DVD copy. No, I won’t lend it to you.

Considered Greenaway’s most accessible work (a claim I have a hard time believing though I’ve not seen anything else by him), my relationship with The Cook, the Thief, His Wife & Her Lover is a strange one. I saw it in college when it was (bizarrely) streaming on Netflix for a time and loved it. Repulsive in its content but beautiful in its composition, it is exactly what an “edgy” film student wants to see. That was in 2016, pre or immediately post-presidential election. Jump ahead, summer of 2019. On a whim I revisit the movie and while it remains the excellent piece of art it was, it packs a wholly new and devastating wallop.

See if this sounds familiar: A tyrannical gangster (Michael Gambon, 15 years before he would take over Dumbledore) dines at a gourmet restaurant every night. He is cruel, crude, hypocritical, tacky, loud, pugnacious, barely literate, and he wears a tie down to his crotch. He dines with his long suffering wife (Helen Mirren) and pack of brain dead cronies. The gangster fancies himself the owner of the restaurant, harassing and tormenting the other patrons and trying to integrate cheap golden flourishes about the place. The real owner of the restaurant is also the head chef (Richard Bohringer) who is stoic and resilient to the gangster’s influences but powerless to get rid of him lest he retaliates violently. The wife starts an affair with a bookish man (Alan Howard), the chef helps hide their lovemaking in his kitchen, and the gangster finds out in a gruesome tale of passionate love and deranged revenge.

At the time of its release, The Cook, the Thief, His Wife & Her Lover generated an awful lot of controversy for its extreme depictions of sex and violence and speculation over what it was trying to say. Many interpreted it as Greenaway attacking Margaret Thatcher’s England. I can’t speak to this as I know very little about the politics of that time and place. But that new and devastating wallop I referenced earlier was from how much the movie speaks to today.

The Cook, the Thief, His Wife & Her Lover is a concussive experience. The film starts with the gangster and his cronies stripping a man naked, rubbing dog excrement all over him, urinating on him, and then leaving him for said dogs. If you checked out there, Goodbye because it only gets worse. It is extreme cinema, slapped with an NC-17 at the time of its release and (my gripes with the MPA aside) understandably so. It’s a movie unlike anything you’ve ever seen. It is theatrical in its design; striking colors, larger than life performances, and predominantly wide camera angles gives the film an unflinchingly lush presentation that is hypnotic rather than unwatchable.

And it is richly detailed. The cinematography by Sacha Vierny is simple yet extravagant, capturing large swathes of space and movement. The lavish costumes by Jean-Paul Gaultier change colors as the characters move from one color coded room to the next, intricately designed by Ben van Os and Jan Roelfs. Its music by Michael Nyman is pointed yet elegant, crucially connecting the film’s myriad tones (though I believe it’s at least partially lifted from previous Nyman-Greenaway collaborations). And the performances are truly remarkable, Gambon and Mirren in particular. Gambon’s performance as Albert Spica shifts his character into wildly different speeds on a dime while Mirren as Georgina provides a much subtler but excruciatingly pained turn. The script by Greenaway is delicately balanced, at once poetic and disgusting (emblematic of the film as a whole), building to a final note that is so grotesquely perfect you will never, EVER forget it.

Thirty one years since its release, The Cook, the Thief, His Wife & Her Lover hasn’t lost an ounce of its impact, even when applied to a different country and administration. It is a bleak film about the cannibalizing nature of tyranny; how it crushes art and love and in so doing, creates a wave that falls back and extinguishes itself. It is a work of unbridled passion and unmitigated fury. Were I able to trade its modern relevance for a historical revision, I would in a heartbeat but I can’t so the film lives on in its new context. Bristling, psychotic, and angry.

What I’m saying is vote.