My family and I took a trip to New York City in the summer of 2008, and we did not see a Broadway show. I remember the views from the top of the Empire State, I remember wandering Greenwich Village and Washington Square Park. It wasn’t until a few years ago, as I visited a friend in Manhattan, that I sat down in a Broadway theatre for the first time. What I didn’t know in 2008, at 12 years old, was that I was missing the debut of In the Heights, a musical I would much later experience in a small London theatre behind King’s Cross Station. A musical I’d come to adore with all my heart and soul.

Even without any previous context, there’s no question In the Heights was born of Lin-Manuel Miranda’s mind – the style is indisputably his, and Miranda’s voice on the Broadway soundtrack is unmistakable – but because the film version has arrived to audiences a full five years after the groundbreaking Hamilton dropped, many aren’t aware that it has been around a while longer. Nominated for 13 Tony awards and taking home four in 2008, In the Heights was Miranda’s first Broadway game-changer, and while the Hamilton soundtrack quite obviously proves his growth as a writer and musician, the story Usnavi has to share is just as captivating, full of heart, passion and determination. With no shortage of toe-tapping musical numbers to boot.

I, like most of the rest of the world, was immensely excited to sit down and watch the film version, if skeptical that it could possibly live up to what I’d witnessed onstage. There are a few movie musicals that have made their way permanently into my heart – The Sound of Music, My Fair Lady – but I imagined, since In the Heights worked so beautifully well onstage (as Hamilton did), that an attempted screen adaptation would fall short. I was so delightfully wrong. From the first downbeat, which teases the familiar opening number even before Anthony Ramos’s Usnavi fully throws himself into the first verse, there is a core imbued in every moment that spawns a well of joy, celebration, community. A sense of “togetherness” that other films don’t have, absolutely stemming from the shared experiences of the people who made both the stage production and the film. Hollywood, see what happens when you let other voices in?

Before we move on, a short sidetrack here to address some of the criticism I’ve seen recently for the lack of Afro-Latino representation in the In the Heights cast. While I thoroughly enjoyed the film start to finish, as a Lebanese American woman, I have experienced enough white privilege over the course of my life to have been naive in believing it to be totally groundbreaking in the representation department. The cast, ensemble included, is very nearly entirely Latino/Latina, with the exception of Patrick Page of Hadestown fame (I adore you, Patrick). Page plays a somewhat similar, if muted, version of his Broadway counterpart in that both appearances portray him as a sort of personification of capitalism. This note aside, however – the rest of the aforementioned Latino/Latina cast is heavily lighter-skinned, and this is an important callout for Miranda and his creative team. Shortly after the criticism came to light, Miranda publicly apologized with a surprisingly sincere note for someone in Hollywood’s spotlight, and vowed to do better. Still, watching the film a second time, what I hadn’t noticed the first time around was abundantly clear. More work should have been done to accurately reflect the community the film so heavily focuses on. While a step forward, certainly a more concrete one than anyone else in Hollywood has managed in the past decade(s), it’s disappointing that a form of whitewashing slipped in. Now, that said – In the Heights was never going to be The Film That Solved Hollywood Representation Issues. It’s simply too much to expect from one movie, Lin-Manuel Miranda or not. I would hope to see more storytellers make representation their focal point, so that the wall falls away inch by inch. In the Heights isn’t perfect, but it landed some solid hits on that wall. My question is: who’s next? 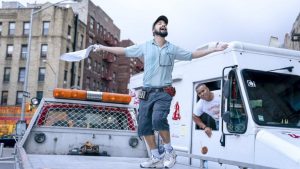 Now, for those who have been fans of In the Heights since it’s Broadway days, you will not be left wanting. There are easter eggs scattered throughout the film, especially in the first few minutes. Lin-Manuel’s surprise appearance as the Piragua Guy had me so delighted I immediately teared up with nostalgia, and his mini-feud with Chris Jackson (who played Benny opposite Lin’s Usnavi in 2008, as well as George Washington in Hamilton) as Mister Softee was less important to the film’s plot as it was two best friends having the time of their lives once again. Though I hadn’t witnessed either of their original performances, it was more than clear that their love for the show, and for each other, has not waned. 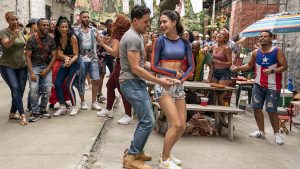 But more important than any throwbacks, each and every cast member gave a stunning performance that constantly reminded that the heart of In the Heights is love, a sense of belonging to the people around you that make a place home. It was this that had me in tears for the entirety of the movie’s two and a half hour run time. That, and the excruciatingly painful fact that so many Americans are hell-bent on preventing non-white people from experiencing that feeling. Anthony Ramos and Melissa Barrera as Usnavi and Vanessa have opposite goals – to return home, and to escape it – yet, over the course of their respective moving processes, come to the same realization, and can’t bear to leave the block they’ve spent their lives bonding on. Corey Hawkins and Ariana Greenblatt as Benny and Nina have instant chemistry that sparks from every duet and dance. Nina’s arc in particular hits hard as it tackles racism in academia without apology or uncertainty, a discussion that has needed to happen for quite some time. Greenblatt plays Nina with such understated confidence, and it works brilliantly. As her experiences as a young Latina woman at Stanford send her heartbroken back to Washington Heights, the extent to which she has been shaken by the rest of the campus’s prejudices toward her should be a wake-up call to every audience member. By the same token, as Sonny (played by Gregory Diaz IV) realizes at a protest that he cannot attend college as an undocumented immigrant, In the Heights calls for a major shift in the average white American’s mindset. I am not optimistic, of course, that such an outcome will actually occur, but the film does a damn good job of reminding us that change is no longer an option – it’s a necessity. 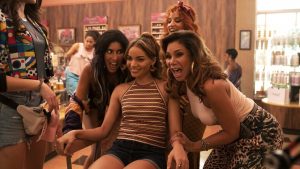 I would not have done my due diligence here if I did not highlight three actresses as the true stars of In the Heights, and those women are Daphne Rubin-Vega, Stephanie Beatriz and Dascha Polanco as Daniela, Carla and Cuca, the gossipy goddesses of Washington Heights’s most popular salon. Rubin-Vega and Beatriz in particular (the latter having stepped away from her day job as Brooklyn 99‘s favorite detective) have an exquisitely funny onscreen relationship that doesn’t get old. Ever since I saw In the Heights back in London, 96,000 has hands-down been my favorite number (and make no mistake, the graffiti air-drawing graphic design technique and interestingly new backdrop of a public pool did nothing to take away from the song’s power), but admittedly, the showstopper here was No Me Diga by a mile. I’ve rewatched the scene at least ten times since I saw the movie a few days ago. The first moment inside the salon instantly felt like being in someone’s living room, a sense of comfortability radiating from every inch of the design, and made all the more glorious by Daniela’s no-nonsense demeanor, which she hand-delivers to her clients with no small side serving of maternal love.

In the Heights is a beautiful film, one that I would watch again tomorrow. And again. And again. And again. The hype for it was built up, but as Abuela Claudia beautifully reminds us time and time again, patience and faith pay off. Well worth the wait, the money, and the hype, I cannot give a more loving and wholehearted recommendation.