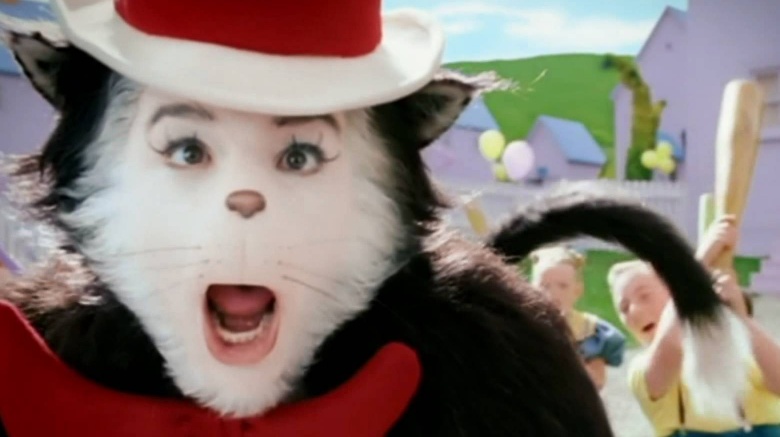 Everyone has a handful of movies from their childhood that are special to them and helped define that part of their life. For me, one of those films is “The Cat in the Hat”. My parents had bought the DVD version and I recall numerous cross-country road trips where, instead of looking out the window at the surrounding scenery, my brother and I were watching “The Cat in The Hat” using a dual headphone jack on my Dad’s laptop. Critics lambasted the film as a shallow, lewd, and completely unfaithful adaptation of the book by Dr. Seuss. I think the people who did enjoy this film were not wrong for doing so, and they may happen to have a sharper sense of complexity and taste than the critics of this movie would like to think.

The first hurdle that must be overcome in the vindication of this film is to dispel the notion that it owes anything to its source material. This is a point that I would make across almost all adaptations of books into film, but I think it is especially pertinent in this case. For example, a book series like Harry Potter contains deep and nuanced characters, a complex plot, and lots of background lore in its 7 large volumes. “The Cat in the Hat” might take you several minutes to read. The main purpose of the book was to provide a more entertaining primer, or an educational book designed to teach children how to read. There is very little depth to the characters and the plot itself is, as one could imagine, not very complex. The children’s book is still a classic, but one can not expect a movie to adhere to such limited source material. They are both different modes of artistic expression, and the film version should be allowed to take as many liberties as is necessary to provide an engaging, stylistic, and hopefully more original experience.

“The Cat in the Hat” was directed by Bo Welch, who would not direct another movie after this one, but that is also because he is, first and foremost, a production designer. This influence is glaringly obvious in the movie as everything from the buildings to the interior design of the house, has a very distinct style, not really seen in the books. Mike Myers, at the height of his career, with this film coming right after Shrek 2 and the Austin Powers franchise, brings the necessary craziness and physical comedy to his performance as the Cat. The writers of the film wrote for a little-known TV sit-com series called Seinfeld. They are also contributing writers on Curb Your Enthusiasm, and one of them is a lead writer on Veep. To say that, somehow, these guys got together and wrote an unfunny, pointlessly crude movie, as some critics would say, is a little dubious. The jokes can be edgy and seemingly tailored more to adults, but as a child I remember appreciating those jokes the most. It’s not as if children are unable to comprehend innuendos and societal satire; it’s more so that we do not want them to, which is why this movie might seem a little threatening to adults. For instance, when Sally is having fun jumping on the couch with the cat, she says it’s like being in the circus. The cat replies “Yeah, but without those tortured animals or drunken clowns that have hepatitis.” It’s these random quips, almost anti-jokes, that surprise the audience and keep us guessing what the anthropomorphic cat might say next.

The Mom (Kelly Preston) is deeply conflicted about her son, Conrad (Spencer Breslin). She loves him, but recently he has been acting out and her boyfriend, Quinn (Alec Baldwin), is pressuring her to send him to military boarding school. In actuality, it is revealed that her seemingly caring, handsome, and successful boyfriend is really a low-life, self-centered slob who despises kids and is only pursuing the mother out of desire for her money. Conrad is acting out because of the lack of attention he gets from his mother, whom has been working overtime at her job. There is a scene in the beginning of the movie where Conrad and his mother express their wish to not see each other again, but we see the mother’s immediate regret after she walks out the door and Conrad’s indignant shame afterwards. The point here is that there are deeply emotional, human issues at play in this movie. One could dig even deeper as some have done and interpret the Fish as the Freudian superego and the Cat as the subconscious id.

The Cat in the Hat is not just a weird film, it’s a surrealist film. Surrealism is a 20th century avant-garde movement in art and literature, which sought to bring forth the creativity of the unconscious mind and, in a sense, depict our dreams. Think of Francis Bacon’s nightmarish portraits, The Twilight Zone TV show, or Salvador Dali’s fantastical paintings. Like those artists, The Cat in The Hat juxtaposes the rational and irrational. In one scene, The Cat and the children enter a kiosk in the middle of the street, transporting them into a rave where everyone is dressed like the Cat, and Paris Hilton cameos as a zelous Cat in The Hat groupie. That’s not the only trans-reality sequence in the movie. Another comes when the Cat’s version of pandora’s box, the ‘Transdimensional Transporterlator’, opens, turning their entire house essentially into a Dr. Seuss meets Salvador Dali dream-scape. At one point in this world, the Cat sees fire spewing out of a toilet seat and says “something like that really burns my Aaaaa-!” as the children and him ride over a cliff on a roller coaster.

I do not expect everyone to love this film. In fact, movies like this often inspire love/hate relationships with audiences because they are trying to do something different and original. At the very least, we can see that “The Cat in the Hat” is not empty and obscene. Well, it may be obscene at times, but that is surrealism, and it is not without meaning. If one would decide to watch it again, I would hope that they would do so with an open-mind, and a newfound appreciation for its artistic merit. “Look, I’m a cat that can talk. That should be enough for you people.”