Hidden Horror Gems: The Subtle, Meta-Masterpiece that is One Cut of the Dead

Let’s face it – zombies are overrated. Maybe it’s the oversaturation of the genre, maybe it’s the fact that no zombie film will ever hold up to Warm Bodies (2013), or maybe it’s simply because watching a movie about a killer virus during a real-life pandemic just feels a little too close for comfort. Whatever the reason may be, it’s safe to say the zombie genre lost its sparkle a while ago – my guess is right after what felt like the 25th season of The Walking Dead. Yet, despite all this, Writer-Director-Editor Shin’ichirô Ueda managed to find a new and fascinating twist on a genre that feels like it’s fresh out of re-imaginations with his 2017 breakout film, One Cut of the Dead. 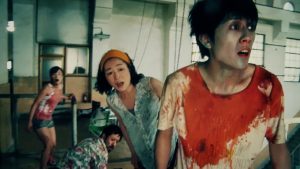 Yuzuki Akiyama, Takayuki Hamatsu, Harumi Shuhama, and Kazuaki Nagaya in One Cut of the Dead

In this meta-masterpiece, Ueda weaves together a zombie tale in three acts – all of which hide their purpose until the final act, which brings the entire movie to a satisfying and hilarious head. This knockout Japanese film is a low budget hit that garnered international success after it’s screening at the Udine Film Festival, then later grew in popularity after a re-release in Japan. The film was created on a measly budget of $25,000, yet went on to gross over $30.5 million worldwide, making history by earning over a thousand times its budget.

The unmitigated success of One Cut of the Dead was praised by critics, many of whom applauded the impressive thirty-seven minute-long uninterrupted camera shot that begins the movie. For any non-film folks out there, uninterrupted shots are extremely difficult and require immense levels of planning by crew members and actors alike – a concept One Cut of the Dead brilliantly explores. 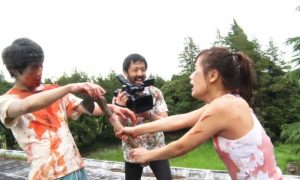 The concept of the film starts off fairly simple. We watch as a motley crew of actors and techies film a low budget zombie movie in an abandoned water filtration plant. The film is led by a tyrannical director (Takayuki Hamatsu), whose frustration with his lead actress (Yuzuki Akiyama) becomes apparent when he struggles to get a genuinely fearful reaction out of her for his film. While the actors and crew take a much-deserved break, the plot of their Indie zombie flick suddenly becomes their bloody and horrific reality. The appearance of actual zombies sends the actors and technicians into a panic, some falling victim to the zombie’s clutches and others falling into their own madness, all while the director insists on continuing to capture the cast’s honest reactions.

The film “ends” with a classic shot of the Final Girl – drenched in blood, holding an ax, and staring eerily into the camera as the view pulls upwards, away from her tear-stained face. The credits roll, and it seems like this should be the end. Right?

Nope. This movie has only just begun. 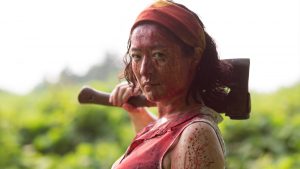 What makes One Cut of the Dead so masterful is its several reveals and twists which help to cast the beginning in an entirely new light. The second act jumps a month back in time to give us a look at the initial creation of the cinematic mayhem we have just experienced. Here we meet Higurashi, who we know as the cruel director in the first act. We learn that he is actually a struggling director himself, who describes his artistic endeavors as “fast, cheap, but average.” In the second act, we watch him stumble through trying to connect to his teenage daughter Mao (Mao), while his wife Harumi (Harumi Shuhama) – who happens to play the Makeup-Artist-Gone-Mad in the first third of the movie – reads his scripts in private and dreams of going back to her roots as an actress. Higurashi is approached by producers from a new Zombie Channel, who present him with a bold and exciting pitch: a live zombie movie filmed in one shot. Higurashi accepts the job, and his personal dissatisfaction with the work he creates becomes more and more obvious as he casts, directs, and prepares for the eventual live production of his new film.

When act three begins, everything falls into place. As the action follows the cast and crew behind the scenes of the “movie”, moments in the first act that seemed like poor directing choices suddenly make sense and add unexpected hilarity to dramatic scenes. We watch as drunken actors, injured cameramen, and last-minute problem solving work to craft a hidden story. Overall, it creates the feeling you are in on a joke that an hour ago you had been utterly oblivious to.

Seeing Higurashi’s journey as he connects with his daughter on set throughout the second half of the movie makes both Higurashi and the audience question what is deemed “good art.” Higurashi struggles to prepare for his new directing endeavor with his old formula of “cheap, but average.” And while it can be argued that the film he ends up creating is imperfect, awkward, and strange at times, its artistic value actually grows as the crew works tirelessly to make sure the show continues on. The final shot of the movie shows Mao smiling up at her father, and you can see the pride and happiness on Higurashi’s face. Art is what you put into it, and you can tell at that moment, Higurashi finally created something he was genuinely proud to call his own. Objectively, the fictitious film they created was not amazing nor groundbreaking, but its value transcended awards or validation.

Oftentimes, when watching award shows like the Oscars, it’s easy to feel like the success of a film resides on one person’s shoulders. However, Ueda’s tight script, sharp editing, and brilliant directing help to craft a film with a heartwarming story that sheds light on the aspects of movie-making we typically don’t see, particularly that making art is a collaborative effort, especially in moments of crisis. It’s a beautiful testament to filmmaking and highlights the differences between artistic product and artistic process. 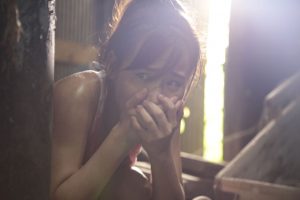 One Cut of the Dead is not what you may expect from a typical zombie movie. It’s extremely metaphysical and quirky, and it takes the film in an unexpected direction not once, but twice. While watching, it can take a bit of time before you really feel “in on the joke”, but the payoff is worth every second of the horrible fake screaming you endure in the first act. One Cut of the Dead is subversive, yet goofy in the same way as hits such as Shaun of the Dead and Tucker and Dale vs. Evil, and is overall a great recommendation for horror movie lovers who want a break from the intense, gore-filled films that tend to pervade the zombie genre. So pop on the subtitles, grab some popcorn, and log in to Shudder or Amazon Prime to watch a movie with the wit, heart, and thrill you’ve been waiting to see on your living room television this Halloween season, and be prepared to marvel at a film that successfully asks, “What makes a good zombie movie?”