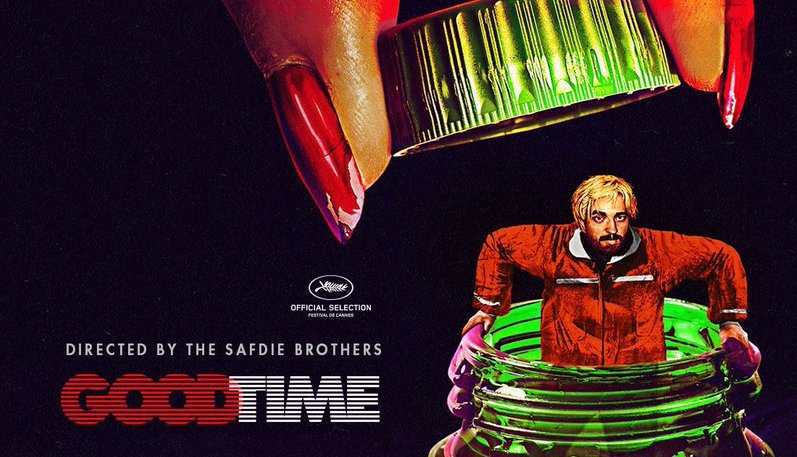 What makes a movie memorable? Is it the story, the plot, the cinematography? With so many important aspects that help define a film, it is difficult to pin down the main contributors to the indelible memory a film imparts on its viewers. With “Good Time”, however, the answer to that question is loud and obvious: the sheer engagement. It’s a wild and exhilarating ride that arrests your attention from the very first scene and speeds away with it in what seems like a never-ending chase.

From the get-go, we’re shoved in the face of Nick Nikas (played by Bennie Safdie), a mentally disabled young man sitting across from what is likely a court-ordered therapist. During the brief session, Nick’s hardened persona peels away, unveiling a complicated upbringing and a violent past with the grandmother who raised him. Then, just as the real psychoanalytical juice was about to be extracted from an already crying Nick, Connie Nikas (played by Robert Pattinson), barges in to the office to liberate his brother. Connie has Nick rip up the session notes, and upon seeing his brothers crying face, he asks the therapist “how would you like it if I made you cry?”. Immediately we get a sense for the foundation of the relationship between these two brothers, which really acts as the driving force for much of the movie, plus a healthy dose of insanity.

This scene quickly leads into a bank heist, where Connie uses Nick as his tough-guy sidekick while he does all the talking at the teller counter. All appears to be going great until they begin celebrating in the Uber (a getaway car service apparently) on the way-back. An Ink bomb blows up inside their backpack of cash, and renders the interior of the car an asphyxiating cloud of bright red dust. They inevitably get spotted and a running race ensues where Connie escapes, but Nick crashes through a glass door and gets sent to the nearest precinct. Connie, with an overwhelming sense of guilt for his brother’s fate, does everything in his power to get him out of jail. This includes pressuring his girlfriend (played by Jennifer Jason Leigh) to loan ten thousand dollars to cover the remainder of the bail bond, but Connie soon finds out his brother is actually in the hospital. Connie’s inherent drive to rescue his brother at all costs and simultaneously evade police capture fuels the electrifying momentum that pulls us through the rest of the movie.

The original soundtrack to this movie reminds me of the classic synthesizers in “Blade Runner”, where, similarly, a lone protagonist explores the surrounding gritty cityscape. It’s sharp, thumping melodies excellently mirrored and exacerbated my feelings of gripping suspense and heart-racing excitement. And coupled with the colorful lighting choices, some scenes feel almost like a rave. The heavy use of close-up shots in the film evinces a raw, even claustrophobic feeling that keeps you close alongside the characters through the ceaseless craziness. The main cast of the film feel very authentic, especially Robert Pattinson in the role of Connie. Pattinson’s performance is believable, spontaneous, and exciting to watch. As a testament to this, Connie’s devotion and protective nature towards his brother draws our empathy, and we can’t help but root for him despite his extremely questionable efforts.

“Good time” is, indeed, a crazy fun time, but there is still genuine humanity in it that shouldn’t be ignored. Nick came from a household of parental absenteeism and abuse, which undoubtedly emphasized his reliance on Connie. This is tragic because Connie is a detrimental influence on Nick’s delicate wellbeing, and keeps him away from institutions that could probably help him the most. It’s only in the last scene of the movie, when we’re finally allowed to gasp for air after an exhausting ride, that we see what Nick’s life has amounted to and tears could easily start to roll.