Oddly, my first thought after watching this finale was that every death (and apparent death) in the episode was very quiet and intensely intimate compared to the rest of the show. After seeing Sean go Full Drama™ in episode nine with pyromaniac self-destruction, I half expected the tying up of loose ends to occur between extreme, violent and difficult to watch (at least for me) action scenes. But most of the finale hinged on betrayal instead of an hour-long action packed spectacle. This really worked rather nicely and solidified the writers’ commitment to character development for me, which until now I wasn’t convinced of. Let’s dive in.

The Wallaces, those who are still alive and trying to maintain control of some portion of their lives, are still in hiding, and Elliot for some reason is being tortured and interrogated. This episode plays with time a lot, not exactly following a conventional flashback structure. Instead, the events of the two days between Sean’s building blowup and the present are told from the 3rd person perspectives of each major character. At least, that’s how it came across in my head. I’ve always loved the idea of time as more of a guideline instead of something that must be followed in a linear pattern 100% of the time, and this episode shows what can happen when a script embraces that.

Anyway, we learn from the two-days-ago timeline that pretty much everyone is being contacted by the police regarding their connections with Sean, and what they know of the explosion – including, as it turns out, Elliot. Meanwhile, Marian Wallace visits her deceased husband’s grave – probably less out of any remaining sense of love or loyalty to him, and more knowing it would likely be one of the last places anyone would think to look for her. Which, in fairness to her, is relatively smart. Until, of course, Ed Dumani outsmarts her once again, and the two share a surprisingly emotional conversation that results in their motivations laid pretty much bare: Marian wants to protect Sean, and Ed wants to protect Alex. It shouldn’t be surprising for parents to opt to show their love for their children, but here we are. Unfortunately for Marian, Ed is willing to shoot her with minimal hesitation to ensure Alex’s success, and we leave Marian quietly bleeding on a bench in front of her husband’s grave, the episode’s exhibit A of an exquisitely personal death scene as opposed to the blood & gore of the first nine installments.

Poor Elliot can’t win in the past or the present, as he’s pissed off the police force he works for, the girlfriend he’s kept the truth from, and the gang leader he’s been secretly trying to bring to justice, all of whom find out the previously undisclosed actions of their former friend. Unbeknownst to Elliot, Shannon Dumani is visited by Vicky, asking her to keep the police force informed in a fairly naive move, in my opinion. After all she’s learned about the Wallaces and those entangled with them, it’s hard to imagine the thought process that would have led to this interaction, and sure enough, a heartbroken Shannon realizes Elliot is undercover and retaliates by shooting his partner. The man himself, meanwhile, meets up with Sean and Alex after coaxing Sean’s location out of Billy, who seems to just be done with the entire Wallace family business. This section of the episode was done very well, crisscrossing between Sean & Elliot and Elliot in the interrogation room. In the present, Elliot receives a message that we later learn means he is now working for the investors themselves, while in the past, Sean tries to team up with Elliot to bring the investors down. A very interesting parallel – Elliot must be playing the long game because, in the end, he shoots Sean in the face when Alex was unable to do so, then protects Alex from harm as they race away from a raid on the building and eventually gives himself up – hence the whole interrogation sequence we were introduced to at the beginning of the episode. 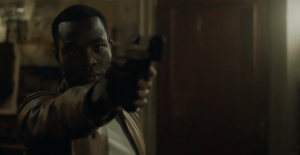 Sean’s death seems like it has been a long time coming – I don’t think we were ever going to make it out of the season with him alive. But again, it was intensely personal and private, especially with the shot coming from Elliot, who at times had even me fooled through the bond he apparently shared with Sean. Elliot has either crossed to the dark side for real, as we learn he has had Sean’s hard drive hidden in his mouth for the investors the whole time and receives a message that they “will be in touch” as he heads out across the streets of Central London. Or, like I said, he is playing a much longer game, wanting to take down anyone and everyone that has a hand in the wildly corrupt situation he’s found himself at the center of. I wouldn’t be surprised if season 2 ended with Elliot’s death, but it will be interesting to see what goes down in between. At the start of the series, Elliot was by far the most trustworthy character, but now the opposite is true, as his motivations and goals are clouded and murky.

As the episode ends with a significant number of questions answered, we’re still left wondering what comes next, and it’s perfectly set up for a second series. One of the questions I had regarding the fate of Marian Wallace was answered in a post-credits scene, which was a pleasant surprise. Turns out she was only wounded, not dead, after Ed’s shot, and none other than Floriana (Finn’s mistress) shows up to offer aid. No doubt this will turn into a major plot point in season two, and has the potential to be quite something. Depending on the chemistry Michelle Fairley and Arta Dobroshi end up having onscreen, I almost hope the two team up and form a rival Wallace organization of their own. Given the time and effort the show has put into developing Marian’s obsession with her husband’s mistress, I suppose they owed us something in that regard.

Overall, well done to the cast and crew on a very well put together season finale.