Watercooler Reviews | “Gangs of London” Round Table: Episodes 4, 5 and 6

It always gets complicated when the hero falls for the villain.

Or so Elliot must be thinking to himself, as he finds himself struggling to say no to Shannon Dumani, daughter of Ed, the once-right hand man of none other than Finn Wallace himself. We saw a lot develop over the past few weeks for all our characters on the fourth, fifth and sixth episodes of Gangs of London. In episode 4 – arguably the least impressive of the three – Elliot and Lale both find themselves in sticky situations, with Elliot nearly caught taking pictures of evidence and Lale, who has tried to go behind Sean’s back ever since he first announced his intention to quit the business cold turkey until Finn’s killer was found, confronted aggressively by Sean for her actions. Interestingly, though he does punish her by destroying the shipments she has worked so hard to hide from him, he also tells her she is the only person he believes to be innocent. This is the first time the relationship between these two characters has actually been explored at all, though there must be a backstory given their status from episode 1. Lale is a character that could have a very cool spinoff series, if the writers should ever feel so inclined. Or if Ed Dumani doesn’t kill her off before they can. 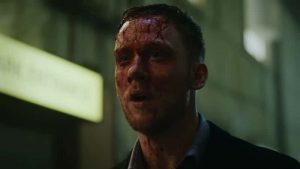 Sean himself, meanwhile, has apparently lost it. At least, according to every other character when they learn from Elliot that Sean has called in a mysterious man named “Cole” for help. Though Elliot comes within an inch of death himself shutting that situation down, the main effect of Cole’s short-lived debut on the show is that people in Sean’s corner lose faith and trust in him, which in my opinion has been a long time coming.

In episode 5, however, things are a little more interesting. We kick off with a deeper glimpse into Finn’s relationships with the Dumani family, specifically with Alex, whose treatment as a surrogate son – the favorite, on top of that – we witness for the first time. What I don’t understand from that flashback is why Sean in the present is so hell-bent on avenging his father, unless it’s some lagging desire to somehow prove his worth as a Wallace to Finn’s memory. Besides this opening, most of the episode’s notable moments surround Elliot, as he finds himself entangled (as mentioned above) with Shannon and her son. Ever more suspicious of Elliot and his intentions concerning his daughter and Sean, Ed flags Elliot as a potential threat, even going so far as to track down and threaten Elliot’s father. Ordered to follow Mark’s every direction as if he were a puppy, Mark very nearly strips Elliot of his “hidden in plain sight” disguise and accuses him of being a cop. During a brutal ambush on the Wallace clan toward the end of the episode, Elliot saves his life, his position, his father and probably his pride by taking a bullet for Sean, who thereafter seems cemented in his certainty that Elliot is on his side. Ed, not so much, but a wounded Elliot looks safe for now.

The end of the episode is some of the most interesting cinematography I’ve seen to date from Gangs of London. In one long shot, the chaos of the families is grotesquely revealed – Elliot writhing in pain on the table, Billy high and barely aware in the next room, Mrs. Wallace frantically trying to find a space to guide Shannon’s tormented son where there isn’t something horrific happening to scar him for life. Ending on a mirrored shot of the Wallaces and Dumanis in total disarray after Sean’s family dinner gone wrong – which was just a little too dramatic for me – we’re left on a cliffhanger to go into episode 6.

The sixth episode was an interesting diversion from most of the rest of the plot, but the questions it answered had been left hanging for some time. We don’t see Elliot, Sean, Alex or many of the major power players thus far at all. Instead, we get back to the boy that started it all when he accidentally murdered London’s top crime boss. As episode 4 may have been one of the show’s weaker installments, episode 6 was the contrary – Darren is in hiding with a woman named Evie, who clearly isn’t aware of the magnitude of the crime. Dreaming, apparently, of the day he will be able to use his one remaining bullet on his father to avenge Ioan’s death, Darren is passing his days lamenting the lack of wifi and staring wistfully out the window. Here we catch a glimpse of what the depth of Darren and Ioan’s relationship might have been, and it hurts more than adequately for the amount of time and effort the show put in to developing it (read: barely any). 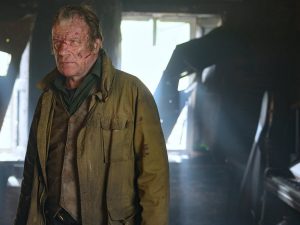 Darren’s father also makes a grand return, conquering hell and high water after narrowly escaping the Wallace’s ambush on his camp with his life. Kinney apparently now gives a damn about his son, and survives so amazingly via sheer force of will alone, it was truly shocking to see him succumb to a final bullet at the end of the episode. After his and so many other sacrifices over the course of the episode (was genuinely sad to see Evie go), I expected Darren to at least make it on to his getaway boat, but alas, it was not to be – son was gunned down as his father was. Ioan’s death unavenged, it was disappointing to lose Darren for the shock factor, and I did not appreciate the subtle-ish attempts to make Kinney seem like a suddenly redeemable character. The continuous brutal nature of this episode was also tough for me to get through, but it was very well-written, and leaves the last three episodes of the season with less to tie up, which will most likely work in its favor.

This chunk of Gangs of London activity ended on a sad and stressful note. It started off weakly, picked up speed and I have no doubt tonight’s episode will be fully engaging as we get back to the Wallaces, Dumanis, and Elliot’s precarious condition. Worth a watch as long as you’re okay with extremely graphic violence.