Gangs of London‘s third episode opened with a quite disturbing scene: the recently deceased Finn Wallace, in a flashback, puts his young son Sean to the test by asking him to commit murder for the first time. As if this were not a horrific enough scenario, Sean’s unlucky target is defenseless, buried neck deep in the dirt, and is stripped even of the ability to look his killer in the eye when Finn places a bucket over his head as he begs for his life.

Though certainly off to a gripping start, from there the episode unfortunately did nothing to increase my sympathy for present Sean, or my interest in him. His brother, though, is a different story. Up to this point, Billy has appeared to be unable or unwilling to participate in the rest of the family’s trade, but when halfway through the episode we revisit this childhood flashback and realize that Billy has killed the buried man upon realizing Sean didn’t quite have it in him, it suddenly seems Gangs of London is gearing up to portray him as much more than a heroin junkie. It will be interesting to watch that side of him conflict with his clearly intense desire to be an influential power player in the Wallace business. One thing that’s obvious is that both routes are not available for him, and either one he chooses, his main roadblock is Sean, who in a rare moment of vulnerability lets his brother see how desperately he cares to protect him. I’m interested to see how their relationship has developed in a way that has led them to switch roles as protector and protected, which I assume we’ll delve into more deeply soon, given the flashback scenes. 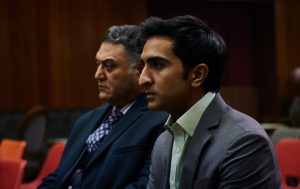 We’ve also got a new family in our midst to watch out for – Asif, an apparently very important business partner of the Wallaces, and his son Nasir, who happens to be running for office to be the next Mayor of London. Corrupt politicians are not exactly a new concept, but given that Asif’s dealings in drugs are financing the campaign, it’s going to make for some very awkward father/son family dynamics, especially since Asif makes quick work of letting Sean know he is down five million pounds. Yeesh.

Speaking of fathers and sons, the terrifying monstrosity of a man from last week’s episode made a surprising move when he willingly gave up his son Darren as Finn’s murderer, to Sean’s face. Hoping to strike a bargain for Darren’s safety, he bartered with Sean, hoping to distract him into going after the true mastermind who ordered the hit. Unsurprisingly, Sean and his one-track mind had no room for this nonsense tactic and responded by blowing their enemy’s entire camp into oblivion. This scene held pretty much all of the action of the entire episode and should have felt like a monumental turning point, or at least a shock, but instead it simply felt like a temper tantrum from Sean, which was disappointing. Perhaps this one fell flat because it was sorely lacking Elliot, who has been front and center during the action scenes of the past two episodes. Left behind by a desperately drugged Billy, Elliot’s attempts to get closer and closer to the center of Sean’s trust slipped away from him this week.

It was not all for nothing, though – we got a compelling look into Elliot’s mind and motivations as he underwent his routine psychological evaluation. Apparently he had a wife and son, both of whom he has lost. The slow burn of Elliot’s backstory is frustratingly drawn out, but I’m hopeful that it also means it’s well written – I’ll be looking forward to unearthing the next tidbit as we go into episode four this Sunday.