I don’t know why I thought I could watch this show before going to sleep after the action scenes I witnessed last week, but nevertheless I tried, and sure enough, I didn’t get much shut-eye.

The second episode of Gangs of London delivered the surprise that Elliot is actually an undercover cop, and a damn good one at that. It’s starting to seem like he is actually the series’ central character, which was a pleasant surprise for me as I find Sean Wallace quite boring and played as such. We focused again on Sean at the top of the hour, as he gave a speech at his father’s funeral that should have been quite emotionally difficult to watch. Instead, though his words spoke of grief for the loss of the man Finn Wallace was to him, all I really heard was his innate desire for the respect his father commanded to be deferred to him. Been there, done that. Not cute.

We’re still following the whole “prodigal son makes a decision others don’t like out of misguided sense of importance” storyline, and it’s already old, which is why I’m intrigued with the focus on Elliot. To be honest, I would have been even more invested if he’d been as shady as the rest of the characters, instead of a policeman. It would have been fun for a few reasons, not the least of which would have been that it didn’t play into show business’s sham-like desire to prove it isn’t racist by casting a Black man in a heroic role. Unfortunately, we’re working with what we’ve got here. I am interested by Elliot’s relationship with his father – in a show jam-packed with so much dramatic action, it’s jarring to experience a quiet scene between two people (especially who care about one another) without the world ending or a gunshot cutting someone off mid-enormously important emotional reveal. Thankfully, this one was genuine. I’m hoping it stays that way and both characters make it to and through the season finale. 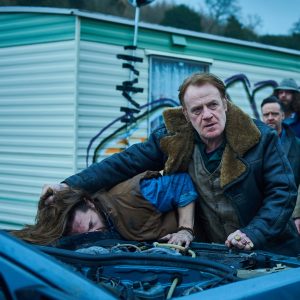 This week, we also caught up with the meddling kids that started it all – Ioan and Darren, the latter Finn Wallace’s murderer, have apparently realized they’ve made a huge mistake, and are in hiding. Imagine taking a job for the money and later realizing you’ve accidentally shot London’s biggest and most well-respected crime boss. Yikes. A shoutout here to Marc Lewis Jones, who plays Darren’s father. Not because of any particularly impressive acting performance, but for the sheer terror he inspired as he a) dropped a car on his firstborn son, Pat’s, leg, b) ordered said firstborn son to kill and butcher his second-born’s best friend, and c) probably ordered the whole hit in the first place, without letting either son in on what was happening. Double yikes.

The culmination of all of this leads to our big action sequence of the week, again featuring Elliot a la last week’s exemplary bar fight, but with a few less of the same-sounding grunts of pain (much appreciated). Sadly, we lose Pat, who chose to die by his own hand rather than give up any information or face his father’s wrath. So, basically a lose-lose for Elliot. I mean, win-lose, I suppose, if the win is that he survived. He has also by this point gained Sean’s relative trust. Point – London Police.

The end of the episode threw around the exact “surprise” that I was expecting to see Elliot pull with his father – Ed, under the guise of bringing a wounded member of his clan a cup of tea, chooses to poison him, then slits his wrists to imply a suicide, because of course “nobody’s gonna believe that, Jack.” I’ve been suspecting something would be a little off about Ed, given the structure of crime drama shows, and I’m still not sure if I’m pleased or annoyed at being right. We’ll see how his decision plays out with Sean & co. in future episodes, I’m sure. I am disappointed at the “quiet moment interrupted by shady unsurprising murder” trope being played out, but what can you do?

In the meantime, enjoy the action, and we’ll see where it lands us in episode 3.