I swear, sometimes it feels like the only thing a DirecTV account doesn’t get you access to is the White House UFO sighting files. Today, I have it to thank for my ability to watch ABC+’s Gangs of London, the 2020 British crime-drama series that began streaming in America on April 4th of this year. Let’s dive in. 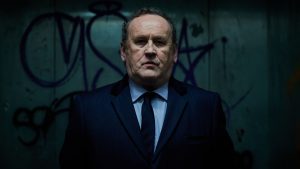 The pilot episode opens on a brutal scene: a young man, dangling upside down from a London skyscraper, drenched in gasoline before his fiery, untimely demise. What has he done to warrant such a brutal end? Unclear. We’re offered only one clue from his stone-faced killer: “What choice do I have?” A quick shoutout from me here to any writing staff that can make a crime drama clichè such as this one work – and then, alas, we flash back in time to witness another murder. This time, the murderer appears to be just as confused about who his target is as we are. Unfortunately for the young man, whose name is apparently Darren, his victim happens to be Finn Wallace, the head of a complex familial crime syndicate. Yikes. 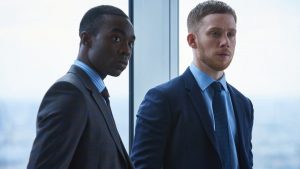 Shortly after, we catch up with Finn’s son, Sean, who is above average only in that he is the inspiration for my favorite line from the episode: “boys like him will do anything to prove to the world that they’re a man.” Sean, distraught over his father’s murder, halts all business for the syndicate until Finn’s killer is identified and dealt with. As you can imagine, this goes over less than enthusiastically, and not just for the other characters. From a viewership standpoint, I must say I did not love the whole “arrogant white man thinks he can tell everyone else what to do” trope played out, especially seeing as two of the other key players in the syndicate – Ed and Alex Dumani – are Black men, and close family friends of the Wallaces. 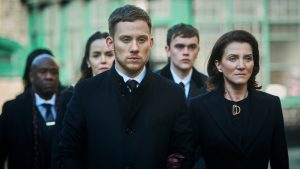 Though critically acclaimed, I’m finding the plot so far to be uninteresting inasmuch as it is unoriginal. I’ve long maintained that as 98% of writing follows a pre-established formula, what is written matters far less than how it is written. The “how” here bores me – I’m certainly willing to give the show more than one chance, given that the only episode I have seen so far is the pilot, but I’m aching for a plot twist somewhere. Maybe Ed and Alex were the ones behind Finn’s murder? Give me something here.

What it lacks in story, though, it absolutely makes up for in action – I could have done with slightly fewer overacted grunts of pain, but the fight choreography is well filmed and exciting. And that’s coming from one of the most squeamish people on the planet. Yeah, I might have had to look away a few times when the knives came out, but give me a good pub fight and we’re back in business. Besides the aforementioned overacted grunts of pain, I don’t have an issue with any of the performances, to be honest. Everyone is played truthfully – it’s just that some of the characters’ beliefs and motivations are rooted in such bullheaded, stubborn truth I found it difficult to watch at times. Perhaps I should not be so critical as this is a staple of many, many (if not all) crime dramas, but nevertheless I felt it was worth a note.

All in all, if crime dramas are a genre you’re into, Gangs of London is probably going to be worth the watch. I’m interested to see the family dynamics play out as I make my way through more episodes – we all know those are tricky to navigate for pretty much everyone, but I’d love to see someone born into such a complex web of dysfunction reckon with the separation of love and money. I’m not optimistic that that will be a theme here, but a girl can dream.