That one big holiday is upon us again. There are many films out there about Christmas and I’d like to spotlight a few. You see, in my residence, It’s a Wonderful Life and Elf are the standbys. Last year, I finally took my friend’s advice and also watched the original Miracle on 34th Street. All three are a wonderful trio of films. There’s a certain magic with Christmas films. You show me the biggest Scrooge and I’ll have him watch the ending of It’s a Wonderful Life. I’ve seen that film so many times and it STILL gets to me. It’s amazing to me that Miracle on 34th Street and It’s a Wonderful Life, two Christmas staples, were both released within a year of each other (Life in 1946 and Miracle in 1947). In regards to modern Christmas films, I don’t think any film of the last twenty years has become a Christmas tradition more than 2003’s Elf. Who would’ve thought a movie about Will Ferrell as an elf would be such a huge hit? Some of my dearest friends don’t like Elf. They are my best friends and I adore them more than life itself. But, let’s be clear, they sit on a throne of lies. What all three of these films create is pure holiday joy. The characters of Buddy the Elf and Kris Kringle resemble ultimate wholesome good. They are a lot like, say, Paddington Bear or Ted Lasso. Where these characters could’ve been annoying, Will Ferrell and Edmund Gwenn fully embody the pure innocence of them and make them endearing. And, let’s face it, who can watch a scene with Life’s Clarence Odbody (Henry Travers) and not feel comforted?

I could go on about these three films but I feel that everybody knows them at this point. Whenever you bring up the best Christmas films, these will always come up. So I wanted to talk about a few films that aren’t as big but I have quite an affection for. Some of these don’t embody the innocence of the above three. Hell, some of these are probably best for adults. But they have one thing in common: they all take place around Christmas. Without further ado, here are my five favorite picks for underrated Christmas films! 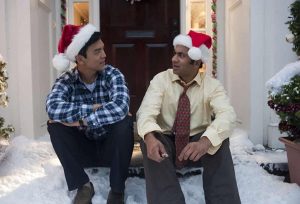 Hey, remember Harold and Kumar? Remember how they went to White Castle? Well they made a 3D Christmas movie ten years ago! And it must be a Christmas miracle because it’s actually a fun ride. I really liked the first Harold and Kumar film but I don’t remember much from the second one. This third entry is a worthy companion to that first film and a fine send-off for these characters. A Very Harold and Kumar 3D Christmas is remarkably un-P.C and no one is exempt from a little joking. It’s rude, gross, and vulgar but you kind of have to expect that from Harold and Kumar right? What is surprising is that it feels like a genuine Christmas movie. There’s claymation and gangsters and waffle-making robots but, in the end, it’s about what the series has always been about: friendship (and weed). Friends can drift apart but maybe through the magic of Christmas they can reunite again. It’s nice to see John Cho and Kal Penn still have strong chemistry together and the jokes mostly hit their mark. This is not a holiday film you have to see but if the eggnog is taking the edge off a bit, pop on A Very Harold and Kumar 3D Christmas. 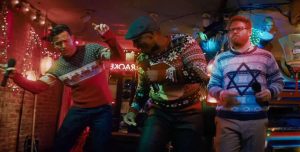 If you liked Harold and Kumar and want more sex and drug jokes with your yuletide cheer, check out this 2015 Seth Rogen comedy. Personally, I am a big fan of Rogen’s filmography. His best movies work as a mix of quotable crude humor and either surprising heart or total insanity (I would have loved to be in the pitch meeting for the absolutely bonkers This is the End). Here we have him, Anthony Mackie and Joseph Gordon-Levitt running amok in NYC the night before Christmas. Like Harold and Kumar but even more so here, the film’s supporting cast is filled with “oh hey it’s (that actor.)” Right over there is Lizzy Caplan and Jillian Bell. And look over there is Ilana Glazer and Mindy Kaling. My favorite character though is undeniably Mr. Green, the weed dealer played by the always excellent Michael Shannon. Anyone who knows Shannon as an otherwise intense actor should get a kick out of this comedic role he plays perfectly. This is a film that works best if you have a fondness for 1) Seth Rogen comedies and 2) Christmas. I enjoy both so I guess we know why I like it. It makes me laugh and gives me a nice message of comrade and, after all, isn’t that what we all want out of the holidays? 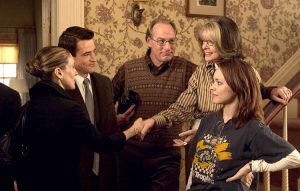 Here is a film that I have seen several times over the past fifteen years. I had such affection for it that I showed it to my best friend…and he kind of hated it. He is not alone. If you go online, the film has a very mixed reception. You either really feel the holiday charm of it or you just can’t wait to get away from this family. True, I can understand my friend’s points but I can’t help but still be in the first camp. You may be annoyed by these people at first but give them time to grow. The cast of this movie really sells this ensemble as a real family. Particular stand-outs are Diane Keaton, Craig T. Nelson, Luke Wilson and Rachel McAdams (I will always be a sucker for Rachel McAdams). This follows a typical set-up for a holiday rom-com. Man dates woman. Man brings woman to meet the family for Christmas. Chaos ensues. However it’s nice that writer/director Thomas Bezucha has made a comedy that I feel works pretty well. It may start off sour but it ends up sweet. What the film is really about is finding the right person for you. I don’t know whether you, dear reader, will be on my side or my friend’s but I’d recommend that you give it a try to find out. 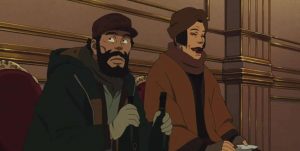 If you are looking for an anime expert, you probably shouldn’t come to me. It’s not that I don’t like anime but I rarely (if ever) seek it out. That being said, Tokyo Godfathers is one you should definitely seek out. It’s the story of three homeless residents of Tokyo who find an abounded newborn baby on Christmas Eve. Not knowing where it came from, the three of them go on a quest to find the parents. The film eventually leaves Christmas but, much like the next film on this list, I am putting it on here because more people need to see it. Tokyo Godfathers, to put it simply, is a film I love. It’s magical and funny while also having some truly affecting character moments. Our heroes are older alcoholic Gin, excitable transgender woman Hana and teenage runaway Miyuki. These characters weave in and out of many different stories and there are many coincidences that occur. Yet there is never a point where I throw up my hands and say, “Oh come on!” Watch it and I bet you’ll just go with its’ flow too. Why? Because this is a film that is full of wonder. Each new step in this journey is one that continues to surprise. Even for those who don’t normally watch anime, this is worth your time. 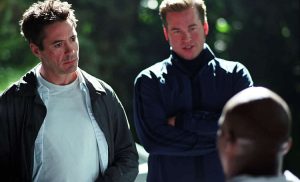 Ok look…is this a Christmas movie? Technically it’s set around Christmas. I mean, it’s a Shane Black script. Of course it’s set on Christmas. Black is the madman behind the scripts for Lethal Weapon, The Nice Guys and Iron Man 3. I don’t know what happened to him around Christmas but it certainly made an impression. Kiss Kiss Bang Bang is a dark comedy/mystery starring Robert Downey Jr., Val Kilmer and Michelle Monaghan. It is so effectively cool and clever that rewatching it is never a slog. This is one of my favorite films of the 2000s and, honestly, one of my favorite films period. This film is sharp like the end of a knife. There are films that try so hard to be cool and then there are films that just are so effortlessly. Downey Jr. and Kilmer make a great odd-couple pairing (Kilmer in particular is a sarcastic hoot). If you like Shane Black’s style and wordplay and want more of it, you best start here. So is this a Christmas movie? Well there’s a scene where someone gets shot listening to Blue Christmas. Ok so maybe put this on the “Non-Traditional Christmas” pile along with Die Hard and Go. Still, I don’t pass up a chance to talk about this wonderful film.

I’d also like to honorably mention last year’s Hulu rom-com Happiest Season, Netflix’s Oscar-nominated Klaus and good old fashioned wholesomeness with The Muppet Christmas Carol. I watched these films last year for the first time and thoroughly enjoyed them all. Whatever you watch though, here’s hoping you have a fine holiday. I know the world seems pretty bleak right now but the holidays are about being together. If you have people you care for close to you, that’s all you need. Merry Christmas and Happy New Year! 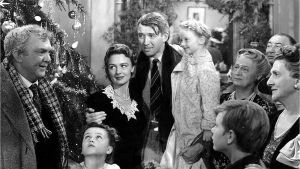