For these past thirty-four years, Ferris Bueller’s Day Off has been acclaimed as a culturally significant film that’s endlessly re-watchable without audiences ever ceasing to enjoy the sunny joie de vivre of this sweet comedy.  Because Ferris Bueller, the character himself, remains a cinematic source of inspiration and delight that is always there for you ‒ just as he was there for his best friend Cameron.

I have been watching and rewatching Ferris Bueller for about the last thirty years of my life.  Tomorrow on Labor Day I’ll be entertained by it again at CHITOWN Movies Drive-In, located in the Pilsen neighborhood.  Because it is a funny and fun movie about friendship and other essential emotions.  Because the actor and comedian Ben Stein ‒ who played the Economics Teacher in the film; the one asking “Bueller?  Bueller?” ‒ put it perfectly when he said this about Ferris:  “It isn’t dirty. There’s nothing mean-spirited about it. There’s nothing sneering or sniggering about it. It’s just wholesome. We want to be free. We want to have a good time. We know we’re not going to be able to all our lives. We know we’re going to have to buckle down and work.  We know [we’ll] have to eventually become family men and women and have responsibilities and pay our bills. But just give us a couple of good days that we can look back on.”  (July 2008)

Ranked #10 on Entertainment Weekly’s list of the “50 Best High School Movies”, this comedy is about a senior named Ferris who recruits his friend Cameron and his girlfriend Sloane to skip a boring school day, and instead enjoy the best destinations of Chi ‒ from popping by the Art Institute of Chicago for alittle bit of art appreciation, to visiting the top of the then Sears Tower (now the Willis Tower, which is visible from the lot of the movie drive-in).  And the movie ranks high on other film lists, because since it was first released by Paramount Pictures on 11 June 1986, Ferris Bueller’s Day Off has become a widely cherished contribution to America’s film heritage, showcasing a slice of Chicago life and culture. 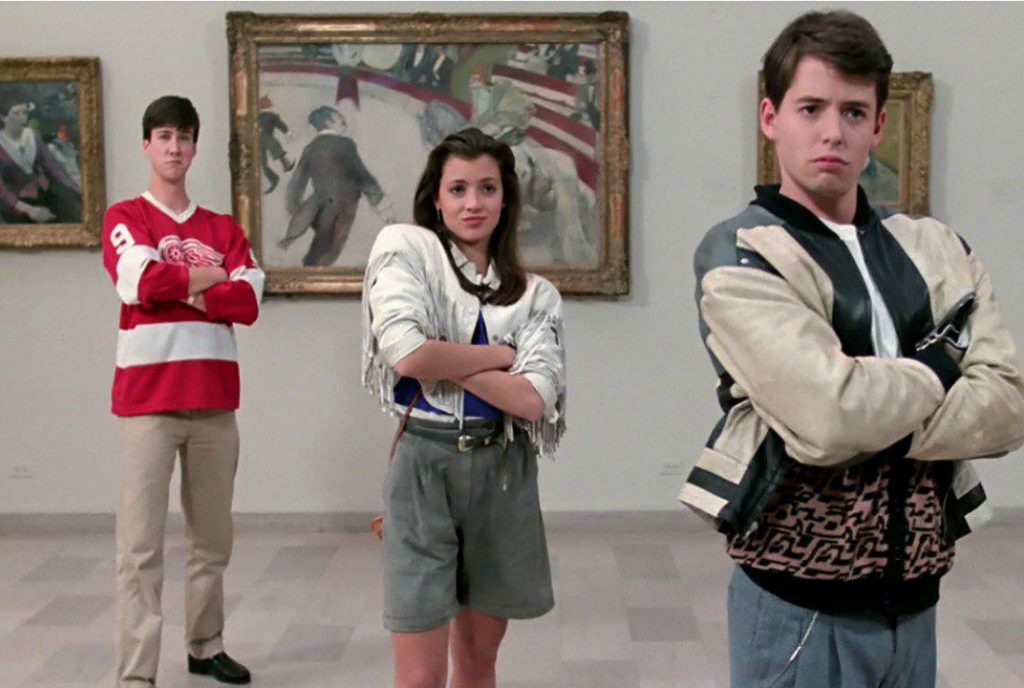 Produced in the 1980s, Ferris has a fantastic and mostly upbeat soundtrack, and there are a bunch of era-appropriate music references, like Ferris briefly watching MTV when home alone in the morning.  There is the classic parade scene when he iconically croons Wayne Newton’s “Danke Schoen,” which we see Ferris practicing during his morning shower.

Ferris Bueller famously said about his day off, “Life moves pretty fast; if you don’t stop and look around once in a while, you could miss it!”  If you’re here in Chicago, if you love the history of our town memoralized in this movie, then why not head over to the CHITOWN Drive-In for this lovely, lively, and totally unforgettable film.  A story promoting unabashed, unapologetic, and gleeful hedonism, this is a movie that is perfect for a relaxing weekend of rest!  Happy Labor Day!!

ADMISSIONS:  Tickets are $33 per car.  They can be bought at www.chitownmovies.com.