Evilspeak is a violent, underrated, obscure movie made more than thirty years ago, when it was banned in the United Kingdom for being a video nasty.  This horror film’s been left behind in the dark abandoned hallways of cinema history, forgotten by most people.  But that’s why I’m happy Chi-Town Movies is dusting off this low-budget film and screening it tonight.  Because Evilspeak scratches the 1980s b-movie itch and scratches it real good: Audiences get overly serious synthesized sound clips, with cheesy lines like “Data incomplete…. Human blood required. Thus spake the computer.”  Evilspeak is average, but exploiting the themes of Carrie and The Exorcist, if you liked those films, you’ll like Evilspeak.

Created by Eric Weston who wrote, produced, and directed this American film ‒ with the cast of Clint Howard (Stanley Coopersmith), Joseph Cortese (Reverend Jameson), Haywood K. Nelson, Jr (Kowalski), and other actors active during the 1980s ‒ the Evilspeak plot falls into the category of a frustrated and ostracized teen misfit deciding to take revenge on his tormentors. I watched Evilspeak as an entertaining speculation of what could happen when black magic meets modern technology.  The movie follows a military cadet named Stanley Coopersmith, who has a doomed dog Fred and who is the social outcast at his military academy.  After being rejected by peers and ridiculed by staff, Coopersmith taps into a way to summon demons and cast spells on tormentors with the help of his IBM personal computer system, which Stanley Coopersmith uses to research Satanism and to translate an ancient spellbook from Latin to American English.

Attention to detail was evident in the movie’s props.  Props are an involved aspect of filmmaking, and I like filmmakers who spend time collecting all items needed to develop realistic characters, settings, and plot ‒ notables who do this are Wes Anderson, Nancy Meyers, Hayao Miyazaki, and (to a lesser extent but still successfully) Eric Weston.  In Evilspeak, primary props are the protagonist’s personal computer, a spellbook, bottles, spider webs, candles, and chalices aflame ‒ some of the items that are necessary when Stanley Coopersmith is whipping up his black magic in a dark basement.

The setting was West Andover Military Academy, and the academy’s cruel culture was the spoofiest aspect of this film. Everyone at the academy is really terrible, from the coach encouraging his star player to injure the worst player on their team, to our protagonist turning to Satanism for revenge.  Evilspeak is an earnest and dramatic film, and while watching I got the impression that Weston wanted to make a comment on how vicious the acts and environment of bullying are.

You will not be disappointed if you see Evilspeak for Clint Howard.  He will not awe you, knock your socks off, blow your mind, or anything superlative like that.  But Howard does a solid job of creating a sympathetic character that is a sweet kid who cannot get a break from the jerks around him.  (Similar to the protagonist of I Don’t Feel at Home in This World Anymore.)  Evilspeak does a decent job of building up tough interaction after tough interaction, helping us to understand why the physically abused Stanley Coopersmith turns to the black magic of Satanism as reliatiation against enemies. 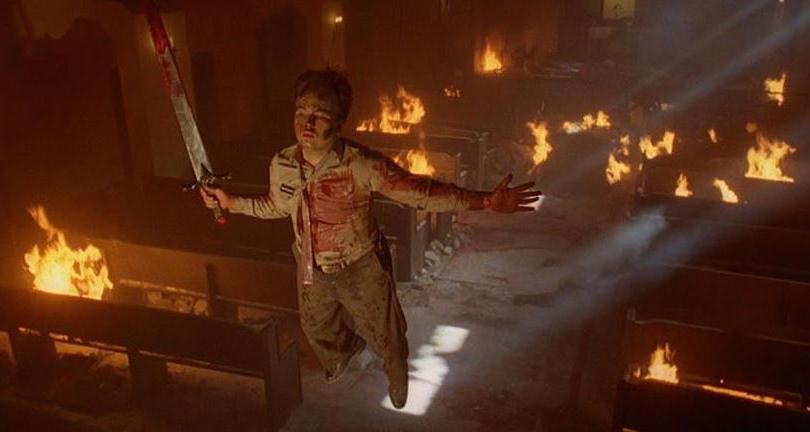 I’ll end by repeating that you must bring a sympathetic heart to the screening of Evilspeak.  This film revolves around Clint Howard and his smacked-around character Stanley Coopersmith, an orphan with no family left to save him from the abuses of his awful school.  Most of the time we are watching Coopersmith desperately seek out a solution to his sad situation, and unfortunately the solution seems to be Satanism.  This makes Evilspeak character-driven.  So like you might rewatch Shutter Island for Leo, or No Country for Old Men because Tommy is perfect in it, please approach Evilspeak for Clint Howard, and you’ll enjoy this slither of 80s horror that shouldn’t be forgotten.  See it (red evil eyes)! 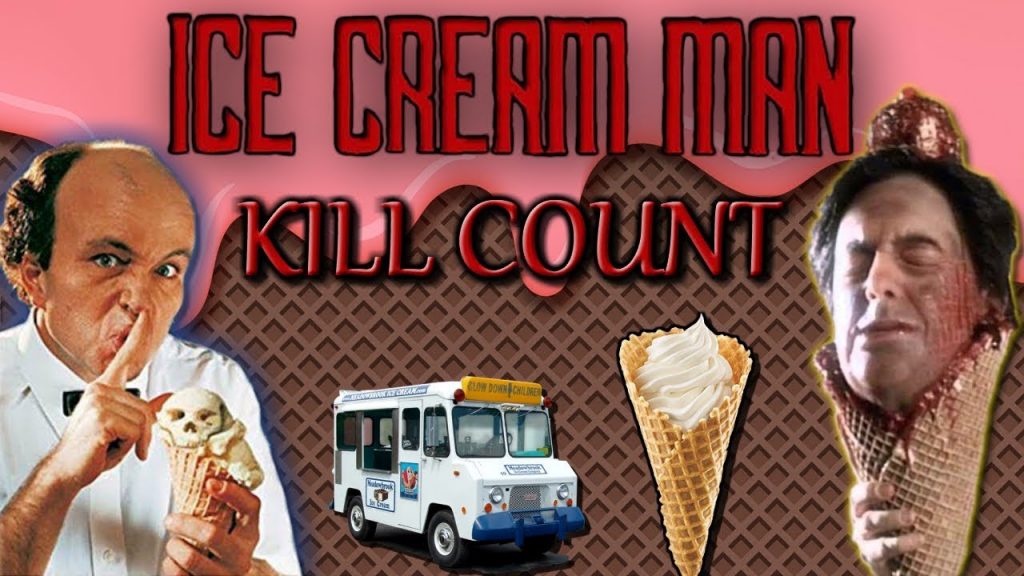 To write this, I watched Ice Cream Man a few times, and my mind melted abit.  The acting’s goofy.  One kid actor was obviously wearing padding, and he was teased for being fat and smelling like raw fish throughout the film.  And we see Ice Cream Man rip into a character’s jaw, his knife spilling blood from the victim’s mouth.  …I may never be the same.

I’d never seen Ice Cream Man until this past week, and I have never seen anything like it, which made this review tough to write.  Some parts gave me the heebie-jeebies, especially in the beginning when I realized kids would be kidnapped and worse. (Don’t churn the ice cream, Small Paul!)  Although it’s in the category of horror, Ice Cream Man is much less scary; lots more creepy and disturbing. It follows a madman released from a psychiatric institution who operates an ice cream factory  ‒  which is the backside of a decrepit ice cream parlor, so completely dilapidated there are spider webs netting a dusty unused register. Unbeknownst to the general public, the Ice Cream Man is using this ice cream factory as a laboratory where he puts gruesome ingredients in his ice cream ‒ such as dog flesh, big insects, and body parts.

This film is set in a suburb.  It starts in the 1950s when a boy named Gregory witnesses his ice cream man ‒ known as Ice Cream King ‒  shot to death.  Traumatized by the event, we then see Gregory in a psychiatric institution.  When he gets out of that hospital, Gregory emerges as the Ice Cream Prince, although others mostly call him the Ice Cream Man.

What I like about Ice Cream Man is how creepy he is.  He comes off as deranged down to the bones, thru and thru. We see him smearing ice cream on gravestones, scooping out eyeballs before smooshing them into a customer’s order, and killing a man by squeezing his face in a hot waffle maker.  Those are just three out of like three hundred examples.  There is never a minute when you are not cringing, laughing, and/or thinking “OOOh my gawd, this guy.”

While Ice Cream Man was far from being boring, I suppose my biggest criticism is the story’s disorganization.  If you’re watching this movie for the first, if you are not paying close attention, you’ll ask “Wait ‒ what’s happening?” or “Why’s he doing that?” The film quality is poor and fuzzy, and characters occasionally mumble lines, which add to moments of puzzlement.  But it’s a slash and splash horror movie, so we don’t need to worry much about technicalities.  There are stabbed body parts and screaming. Those are the main criteria, right?  So watch with a group of your pals, and have a great gory evening!!