If you’re like me, you’ve taken to waking up early on Friday mornings to see the newest episode of WandaVision spoiler-free. With an intensity rivaling, and probably even surpassing, the Internet storm that took over from the airing of the first Mandalorian episode, it seems no matter how quickly you tune in to Westview’s latest, someone has beaten you to it. And this week in particular, I’m glad I opened up Disney+ at 7am to catch up with Vision, Wanda and Monica & co. before I commenced my usual morning routine of Twitter doomscrolling. 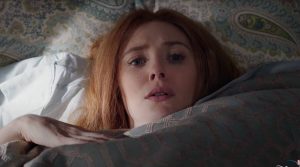 Finally, the seventh installment of Wanda’s fake reality/coping mechanism sitcom gave its audience (er, one of its audiences, at least) more answers than questions, and it was so satisfying I was promptly left nearly frothing at the mouth with anticipation for next week’s episode. From the very start, perhaps what makes this episode so appealing is its Modern Family meets Parks and Recreation mockumentary “talking head” style – a primary and most familiar form of comedy for many, many viewers. Already, the tone feels more like what those under a certain age – likely a huge portion of Marvel’s target audience – are used to. And, because we are hardwired to expect confusion in unusual circumstances and comprehension or a sense of control in familiar ones, from Wanda’s first “interview” there is a slight perception that we might start to feel a little more on top of things by the end this time. How ironic, given that this episode also features Wanda’s loss of control, her powers and her world unraveling bit by bit. As she loses stability, we gain it. I loved the balance there and I was completely invested in every character’s decisions. 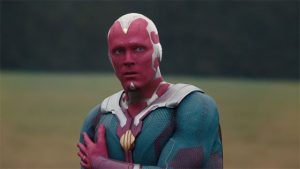 Form aside, there are three main points that made this episode fly by, the first of which carries the lightest load in terms of plot development but was nevertheless one of the most delightful things I’ve seen from Marvel in a long time. Vision and Darcy are a joy together onscreen – Kat Dennings as Darcy gives off a wonderful, muted sense of fangirl jubilance – she’s suddenly sitting next to a real-life hero, and the star of her new favorite show. But she reigns it in in service of The Bigger Picture, and the result is a few far too short-lived Bonnie & Clyde moments – that is, if Clyde was an amnesic robot that could fly and… you get the idea.

Second: we have a new hero on the scene. It wouldn’t surprise me if, a few years from now, we either have or are petitioning for a standalone film for Monica Rambeau. Allegedly aligning with the comics, Monica’s travel to and from Westview has, in Darcy’s words, “altered her cells on a molecular level,” now so much so that she can hold her own in yet another show of strength, determination and resiliency. She might even be able to take on Scarlet Witch going forward, as evidenced by her pro instinctive landing after being blasted by Wanda. Though, notably, her words alone seemed to be doing the trick, until interference by Wanda’s bestie in chief Agnes led us to…

…the third and biggest reveal of the episode (I won’t be so bold as to say “season” here, knowing Marvel). Kathryn Hahn’s Agnes introduced herself, for real, to Wanda as Agatha Harkness in a refreshing cliffhanger, one that hasn’t hit so hard since Infinity War. A magic user who seemingly has the ability to manipulate Wanda – who herself, Rambeau reminds us in episode five, “could have taken out Thanos on her own if he hadn’t initiated a blitz” – must be yielding an unthinkable amount of power, and Agatha’s perfectly unsettling smile as she lets Wanda in on her true identity promises nothing short of total chaos. No doubt this will play directly into the upcoming Doctor Strange film, perhaps in the event of a necessary intervention from the master sorcerer to put an end to the WandaVision Big Bad’s plans. Obviously, we’ll have to wait a little longer to figure out exactly what Agatha’s game is, but nevertheless I can’t wait to see more of Hahn.

Now for a few honorable mentions. 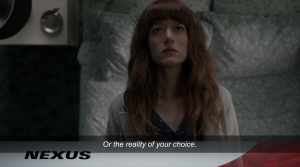 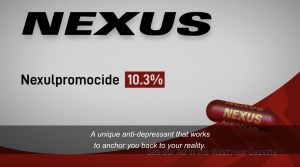 Last week I came upon a fan theory that the commercials we see mid-WandaVision episodes actually represent the Infinity Stones (read at https://screenrant.com/wandavision-commercials-infinity-stones-theory/). A few inconsistencies aside, this episode’s commercial boasted an antidepressant that “works to anchor you back to your reality. Or the reality of your choice.” This would, of course, prove the idea that episode five’s “Lagos” commercial represented the Reality Stone incorrect – but it’s still possible we may see a passable representation for the Power Stone in one of the last few episodes.

Lastly and interestingly, the latest episode also featured WandaVision’s first post-credits scene, a longstanding Marvel tradition. Maybe now that the plot is pickup up with more straightforward plots and twists, we are falling into a more comfortable superhero narrative. Whatever the reason, in the scene, Monica encounters Pietro, who seems to still stand solidly on Wanda’s side and confronts her somewhat aggressively. The episode thus leaves us with two immediate questions: what is Monica’s next move, and where has Pietro been?

In any event, I’m extremely excited to see what episode 8 has in store for us. Until next Friday, WandaVision fans!