Dear Evan Hansen was the first ever show I saw on Broadway, in 2019. Which means, for someone with a degree in theatre, who has loved it all her life, that I’ve never forgotten it. I sat down in my seat, knowing most of the songs by heart already, and I cried for two and a half hours straight, something I hadn’t done since seeing Hamilton in Chicago, 2017. The show is without a doubt more cookie-cutter Broadway style than Hamilton (or, my current obsession, Hadestown, which you should ALL go and see), and I was under no false impressions otherwise. Yet, Dear Evan Hansen holds a special place in my heart.

Before diving in to an analysis of the film adaptation, I want to address the criticism that was thrown out about Ben Platt long before the film was released. No, he does not look like a high schooler. No, I don’t know why the hair & makeup on Ben went so overboard when everyone else in the film looked like a normal human – and, further, when he played the role just fine looking like himself on Broadway. I do, however, feel that it is a disservice to the film to write it off based on this alone. That Platt’s performance was strong should surprise no one, and though other casting choices felt a bit conventional (Amy Adams as Cynthia Murphy) or cast as token BIPOC characters (Danny Pino as Larry Murphy), the film is absolutely still worth a watch.

Platt himself is the star he was onstage. He is clearly very comfortable in the role and across both mediums, stage and screen. The criticism of his look for the film adaptation is unfortunate as it cast a premature and undeserved dark shadow over his unreleased performance. But the film is worth it for his voice alone, which, though tweaked a bit for the screen, remains nearly as pitch perfect as it is on the Broadway soundtrack. The last time I was this impressed by a theatre artist was by Renée Elise Goldsberry in the Hamilton Disney+ film, which, coming from me, is some of the highest praise I am capable of giving. 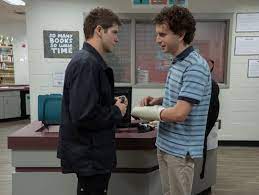 The plot follows Evan, a socially anxious high schooler, as he accidentally forges a surrogate son relationship with the family of a classmate, Connor, after he takes his own life. Having passed away with one of Evan’s therapy assignments, a letter addressed to himself (“Dear Evan Hansen, today is going to be a good day, and here’s why”) in his pocket, Connor leaves what looks like a suicide note behind for his parents to discover. Not wanting to disappoint them, or their daughter/Evan’s crush Zoe, Evan decides to keep quiet about the letter’s origins in the hopes he can help the family move on.

To hear the plot summarized in a few sentences like the preceding ones begs the question, “why on Earth wouldn’t this kid just… speak up? This seems like a big misunderstanding.”

But it doesn’t feel that way, to actually watch the plot unfold. I adamantly believe this is in large part due to the show’s focus on social media and the relatively embarrassing methods by which many of us retrieve most of our news; I, for example, hear about at least 60% of world events from the BBC’s Twitter account. And for this reason above all, the film adaptation fell flat for me. The plot is still the plot, but the stage production presents it in a way that makes it feel as though you’re living inside Evan’s computer, overwhelmed with the onslaught of like and comments and criticisms and insecurities until the moment Platt snaps the lid shut, at which point you’re forced back into the reality of his actions with him. You Will Be Found plays on this to the maximum, leaving zero dry eyes in the house, whereas onscreen it feels clunky and exaggerated. It is difficult to portray the less-than-ideal aspects of the social media dependent world we currently populate through a similar medium, like the big screen. And I don’t feel the film fully transcended that challenge. 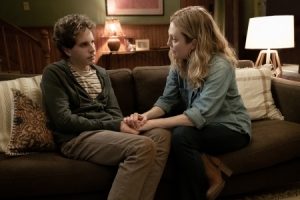 As far as musical number go, I was saddened not to hear the opening chords of “Anybody Have a Map?” as the film took off, and instead we open on what should have been the showstopping “Waving Through A Window.” I understand why the film’s producers took this route; Platt is famous for this song, especially after performing it at the Tony’s, on a number of late-night shows and probably every concert he’s sung at since setting foot outside the Music Box Theatre’s stage door. Still, what makes the song so good is the setup – it loses its charm and effect when at the top of the show, there is no sense of Evan as a person outside of his anxiety. The brilliantly catchy and well-balanced “Anybody Have a Map?” provides that sense through Evan’s relationship with his mother, which is later used to bring the house to a sniffling mess after the gut-wrenching “So Big, So Small” in Act II. Without “Anybody Have a Map?”, the latter number also loses the sucker punch it provided in Rachel Bay Jones’s stage rendition, after having seen the full extent of the ups and downs of their relationship. On this note, I was also upset by the decision to cut Act II’s “Good For You,” and though the plot advancement provided by the song was adequately covered in a scene between Evan and his mom fighting outside the Murphy’s home, I’m a little salty.

Further, without the opener, we’re instead immediately seeing Evan as the personification of his mental health struggles. Aside from the obvious problem with that, it opens the dangerous door for audience members to see him through a lens of pity instead of one of real, flawed human actions and decisions. There is no high school auditorium speech in the world, no amount of nervousness or stuttering or family trauma, that excuses what Evan does to the Murphys, and it’s easier to side with him regardless when “Waving Through a Window” is presented as the first impression of our lead character. The film sympathized with Evan in a way that made me a bit uncomfortable, where the stage production did not. Another subtle but important difference between the two.

I would be remiss not to mention a song that was added, instead of critiquing the filmmakers for everything they cut and calling it a day. Evan’s peer/friend, Alana, sings a song mid-film called “The Anonymous Ones.” A tribute to those with anxiety who may deal with it in a more socially acceptable manner (namely, keeping so constantly busy there is no time to give the worries much consideration), I found myself wondering how the show existed without it in the first place. 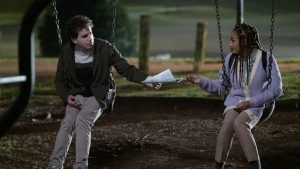 Now, I am not usually a big fan of new songs written solely for film adaptations. I have few defenses for this besides a simple personal preference, but I must admit here I was pleasantly surprised. I would even go so far as to say this was the most moving moment for me throughout the entire movie, though this of course may also be related to my not having heard it before, as opposed to the rest of the soundtrack (which I’ve had memorized for about two full years). Might I also recommend SZA’s cover of this one, which is just *chef’s kiss.*

Last but not least, I was disappointed by the film’s portrayal of my hands-down favorite song from the show, “Requiem.” I found Kaitlyn Dever’s performance as Zoe Murphy acceptable and solid throughout most of the film, and she had a nice voice for it, but I do wish they’d left out a very random scene of Zoe angrily driving down an open road at the song’s climax. This is a number with lyrics I feel must be heard and focused on at all costs, the message being that a family tie is never an okay basis for abuse. “Requiem” efficiently and constructively destroys the “blood is thicker than water” argument in a few simple verses, and I feel very strongly that as the Murphys sing their perspectives free from sight or judgment from one another, there should be very little else happening to distract from that message. Zoe’s anger, Cynthia’s sadness, Larry’s feelings of betrayal shine through at their strongest when the focus is on them and nothing else. The film tried a little too hard here, and it made me wish everyone in the theatre could have witnessed the stage performance of that scene alone.

All that said, it’s extraordinarily possible that I’m being a Theatre Snob™, too focused on the show I saw two years ago and not the film I witnessed two days ago. Any moviegoers without the stage > screen bias I’ve got going on, let’s open the floor to you as well.