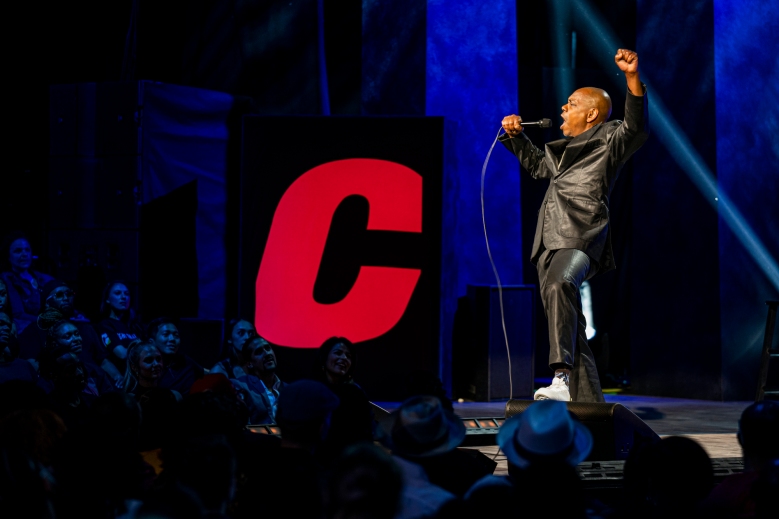 “Are you ready?”  –Dave Chappelle: The Closer

It has been a minute since I’ve written, and I’m sorry about that.  Now that I’m in my second year as a Chicago resident, life is picking up speed, but I’m definitely a member of the Chicago Film Scene, which I have loved writing for and which I’ll continue contributing to.  I am a contributor, because I need to process film.  In my overactive analytical mind, I need to review media ‒ as media is now, and as it’ll continue to evolve.  (…My bet is on in-home holograms by the 3000s…)

In fact, I’d say this review is about evolution.  Specifically, Dave Chappelle’s evolution as evidenced in The Closer which is brave and vulnerable and human.  This is the first time in years when a review has come spilling out of my ear canals, unstoppable out of my eyes sockets.  Out of my blue aura.  Out of my gut.  Out of my fingers, as I spontaneously typed without an outline.  Out of my heart and out my past as a Black woman who grew up in Black culture with Black uncles.

Dave talks and jokes like my some of my uncles and male cousins.  I’ve never disliked his stand-up because I see and appreciate a Black man bravely and personally processing social issues in front of a fucking humongous audience.  Is he sometimes offensive?  Yes. Being a woman with a vagina, I’ve cringed and whispered “too much.”  However, I think many critics are overlooking the fact that Chappelle obviously knows that at times he’s gone too far, and he pledged at the end of The Closer to stop making any more jokes about the LGBTQ+ community until both sides start laughing.

First, let me say this.  Chappelle isn’t going anywhere.  I knew that before he told the parable of the big Black giant who keeps getting scolded and shot at but doesn’t die.  He just has his heart broken again and again.  Chapelle is not going to be cancelled, no matter how much someone hates him.  He talked about some of the people who hate him, and they are some of the people who’ve hated me too.  They, generally speaking, are women in the White LGBTQ community.  The group that I trust the least are White lesbians because of a history of judgement, emotional abuse, name calling, humiliation, and rejection that has felt racial ‒ over and over and over again ‒ and I will stand by that, available and able to share stories from my 20s until [1] I embraced the peace and sanity of being a spinster in my 30s and [2] I stopping putting myself in social situations with White LGBTQ+ women.  It’s always felt fundamentally racial.  There has never, and I do mean never, been that misjugdement and misunderstanding with Black members of the LGBTQ+ community.

So, why the uncomfortable disclosure?  Because!  Because at the end of The Closer, when Dave Chappelle essentially pleads (with pride and self-respect) in this latest and last special that first and foremost his comedy is racially charged, rather than focused on sexuality, when he mentioned Susan B. Anthony versus Sojourner Truth and Truth’s strength to still stand up and ask “Ain’t I a Woman?” ‒ well, the Black womanist I am first raised her hands and clapped loudly ‒ too excitedly for being all alone in my livingroom – before silently bringing my hands down to my mouth and pulsing with gratitude to Chappelle for having the courage to speak publicly about how #MeToo and the contemporary gay rights movement have empowered White women’s voices, elevated on a platform of structural equity without interpersonal equality.  From the beginning, I’ve always felt like my watershed #MeToo time will be focused on social oppression from White women, not White men.  I’m still waiting for that inclusive women’s movement, which is what I heard in Dave’s latest stand-up.  As he’s said in each of his Netflix’s stand-ups, he’s been trying to focus on race, not LGBTQ+ issues.

Quickly, let me posture myself this way: There are White women who might be offended by my endorsement of Dave. Bring it. I’ve lived life often being shat on by many White women ‒ from mild condescension, to psychological warfare that’s left me exhausted from battles that I never wanted.  There’s a hierarchy among women that must shift or shatter.

Here’s another thing:  For many – maybe for all; I don’t know, and I don’t want to make that assumption – but for many, being a Black American is a journey.  You’re innocently born with brown skin, inheriting a complex history, carrying the yoke of “how someone is supposed to be Black,” navigating challenging and specific social expectations – and for some of us, Dave’s Cliffords, Black people who are called “so White,” often fighting to have the authentic humanness of their Blackness acknowledged as an American identity can feel like an unpaid job, because our Blackness is not included in society’s narrow definition.  In Chappelle’s stand-up, when he brings this up, I as a female Clifford felt seen / accurately represented by Chappell.  Actually ‒ instead of just calling himself a feminst, I wonder if Chappelle should have also called himself a womanist, because then he would have been speaking and working across the color lines.  It is evident that Chappelle has done extensive reflection on his place within America as a Black feminist, so that I ended this special feeling like he has earned a position in the ranks of representing of the race and contemporary Black American culture.

But feminst or womanist, I loved this stand-up.  I adore Dave, even when he’s being offensive.  Because Black people be offensive sometimes, y’all – shit!  Let me tell you something:  Listen… Listen…  Ah-hm….  Listen (a finger snap), in a room with a bunch of Black folks sitting together and joking, it’s not always PC ‒ which Dave Chapelle mentioned in one of the earlier specials, when he spoke about the lesbian parents at his son’s school – one being White and not liking his humor; the other being a Black woman who culturally understood Dave is just fucking around.  And this goes back to my basic sentiment about Dave Chappelle.  He always has and always will feel like one of my Uncles.  …I believe that is an African and British-African sentiment, no?  To recognize cultural familiarity in an older Black man, and to call him Uncle.  Whenever I watch Dave Chapelle, in my mind’s eye, I also envision myself sitting around a table with my family.  Dave’s comedy feels like home.  But more than comedy, Dave’s stand-up is social commentary, and this latest special felt like a funny TED Talk about the perspective of a Black man doing his very best to keep up with these fast-changing times.

So, and I would be looking into your eyes right now.

If you cancel Dave, then you cancel me, cancel all my Uncles – those I’m related to, those I’m not related to, and all the Black men in this world who are really doing the work (The Work) to understand and respect these fast-changing times.

We’ll see you in a few years.