Off the Beaten Path | Danger 5 S2E7 – Welcome to Hitlerland 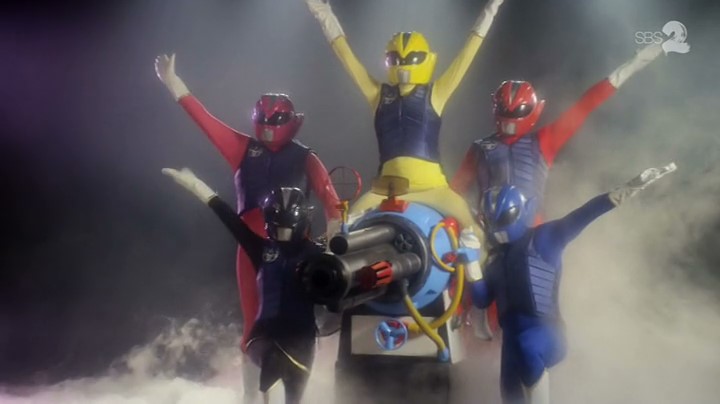 So here we are, at the end of the line with Danger 5 in Welcome to Hitlerland, the series finale. After all the bumbling successes of our heroes over the previous 12 episodes, they must come together in not only the darkest timeline but also their darkest hours to save the universe. We are left with two questions. First, who do they save the day once and for all? Second, is it a satisfying ending for everyone who’s followed Danger 5? For me at least, it’s a bit of a mixed bag, and per usual I’ll tell you why.

Welcome to Hitlerland starts after Danger 5 and Holly realize they are in a world where Hitler is supreme leader. What’s more, they realize they’re stuck since they can no longer travel back in time. This is because in Hitlerland there is no mozzarella for their time travel cocktails since everything is vegetarian. Before they can get their bearings, Hitler – wearing a mech suit and utterly invincible – arrives at the Hitlerhat and quickly annihilates the team.

They then wake up, since Hitler won’t allow them the luxury of escape by death. Everyone is altered in a way that partly disables them. They are then left by Hitler to suffer. They quickly escape but are quickly captured by a masked figure who reveals herself to be Boss Level Holly aka Danger One. She just as quickly gets killed by Holly by her new mechanical arm, which is remote controlled by Hitler.

Scrambling, Pierre and Jackson are quickly captured by Hitler’s henchman while the other three flee to the Soviet Winter Palace. At the palace, Ilsa, Tucker, and Holly encounter the three sacred warriors of the Soviet Union aka a pelican, a balalaika playing fish, and something that looks like a man, I’m not sure. Everything seems to go well until Holly flies off into space aboard the pelican, a hoodwinked Tucker murders the other warriors, and Hitler’s henchmen arrive just in time to capture Ilsa and Tucker. While Holly and the pelican fly to the old Danger Base, the members of Danger 5 deal with their ultimate fate. In this case, they are stuck as unwitting actors in a hokey sitcom starring a mechanical Hitler for eternity.

Holly and the pelican encounter a grizzled Colonel Chestbridge, who shoots them out of the sky. Chestbridge then narrowly avoids another assassination attempt by an unwitting Holly, and quickly takes out Hitler’s henchmen. Exasperated at everything, Chestbridge heads off to Hitler’s flagship to free Danger 5 with Holly in tow.

The escape plan goes off without a hitch, and Chestbridge gives Danger 5 the keys to ultimate victory. Namely, five rings, each empowered with the ability of God Mode. There’s a quick snag in the plan however aka Hitler shoots off the Colonel’s hands, preventing him from accessing God Mode. Danger 5 and Holly then enter God Mode, essentially becoming invincible Power Rangers. They manage to defeat Hitler and shoot him out into space, saving the universe once and for all.

We then see the ultimate fates of all the principal players in an epilogue montage. Tucker finally moves on after getting blown by Claire’s ghost. Ilsa becomes Queen of Russia, which it looks like she finds boring. Jackson has accepted his sexuality and meets up with the cowboy who freed him in Super Dead. Holly, the Colonel, and a now alive McKenzie (he shows up earlier, imprisoned by Hitler on his ship) live in the Danger Base. Lastly, Pierre gets gunned down by the husband of a woman he’s having an affair with.

So yeah, unsurprisingly for a series finale Welcome to Hitlerland is fairly packed with plot points. As I said back in the intro, I find Welcome to Hitlerland to be a bit of a mixed bag. This is mostly because of the last 5 minutes or so aka everything after the gang entering God Mode. I had no problem on the whole with Welcome to Hitlerland spoofing tokusatsu cinema, but I feel like the action of the final battle is rather lacking. To be fair, the members of Danger 5 did a fair amount; it helped they were fully covered up so they could easily use stuntmen and stuntwomen for the action.

Hitler, on the other hand, just kind of stands around. Like, I understand he’s invincible and all, but I would think that if he’s invincible he could easily leap into the battle and go hog wild on the offensive. Sure, I understand this might not have been something that happens in tokusatsu cinema, but as the final confrontation between Danger 5 and Hitler was kind of boring.

I was also rather torn about the epilogue montage. Out of the shots we got, I didn’t have much issue with Jackson’s, Ilsa’s, and Holly’s endings. I was fairly pleased with Jackson’s ending. I mean, it’s about time the man catches a break and finds some happiness in the emotional quagmire that is his life. Ilsa’s too, largely since I can understand why it would be bittersweet for her. It’s understandable she finds not being in the middle of the action boring despite being queen of U.S.S.R.-Land.

What I don’t like are Tucker’s ending and Pierre’s endings. In terms of Tucker’s ending, I don’t think it’s at all deserved. Sure, he did something helpful in this episode, but he still was a delusional, borderline psychotic hindrance the whole season. If anything, they should have just thrown him out of the airlock with Hitler. For Pierre, I just don’t like the fact the nominal hero of the season was gunned down in such an anti-climactic way. Look, I understand what they were going for, spoofing 80’s shows that ended with a last-minute downer ending like Alf, Roseanne, and Miami Connection. That said, it doesn’t mean I have to like it.

There were some other minor quibbles I had with Welcome to Hitlerland. In terms of Hitler’s henchman, I feel like it was a missed opportunity for Russo and Ashby to bring back some of the historical Nazis one last time. Again, I understand what they were going for in terms of tokusatsu parody, but imagine if they brought back some of the better side villains from season one, or even season two. It especially feels like a missed opportunity when you compare the returns of season one villains in earlier episodes; if you want a solid example, look at Rommel in Un Sacco Di Natale. In the end, the episode does rather well tying the whole show together, so it feels weird they disregarded bringing back some great villains one last time.

My last quibble is about Holly’s arc. In Welcome to Hitlerland, Holly says she wishes Danger 5 would take her seriously as a grown-up, especially after everything she’s gone through in the season. The thing is though, I don’t think she’s earned it. I’m largely with Ilsa in that she was rather useless the whole season. I mean, anyone can be a damsel in distress. So if Holly wants to be taken seriously, she should have done more to help, and if her ending is any indication she hasn’t learned a damn thing.

All those said, there were things I liked about Welcome to Hitlerland. For one, the stakes were certainly at the highest, both externally and internally. Externally, if Welcome to Hitlerland felt like any other mission of the week, it would have fallen flat. Full disclosure, I’m not super into stories where the stakes are universal. It’s a scope that’s hard to fathom (the scale of space is too large for this), it’s often done to artificially create stakes, and is cheapened when done repeatedly. In other words, if you go with universal stakes, you goddamn better mean it. So with all that said, I think Welcome to Hitlerland doesn’t mess up the stakes too much. Is it perfectly done? No, because it only shows people, instead of the potentially infinite denizens of the universe. Does it make sense to have stakes presented as such? Yes, it does.

If we look deeper, we also get some solid internal stakes for the characters. In Welcome to Hitlerland, it’s because Danger 5 are at their lowest, all because they put themselves there. If you’re wondering what I mean, it’s all because Danger 5 completely failed to put a stop to Hitler in Back to the Fuhrer. They didn’t stop him before he became invincible. Hell, they just assumed he was done because he was buried, even when they knew he was invincible. All of this is to say that Welcome to Hitlerland is their fault. Because it’s their fault, the stakes, both to save the world and to make up for their failure, takes a solid personal angle.

One last thing I enjoyed about Welcome to Hitlerland was how well it tied everything together, barring my complaint about the henchmen earlier. If there was a previous running gag throughout the season, a brief one-off joke revisited, or some brick joke, Welcome to Hitlerland addressed it. What this does is add a large amount of rewatch value to the season, and the show as a whole, by letting us know every long form joke gets addressed in some fashion.

For example, we saw a skeleton and a snowman in their third appearance this season. If you’re wondering what I mean, they show up in Merry Christmas Colonel and Un Sacco Di Natale. To be honest, I’m not sure what their purpose is. I think it’s some kind of cosmic balance thing, but I’m unsure. That said, I’m curious enough where I can see myself rewatching the season solely to understand their purpose. I know this won’t be the last time I watch Danger 5 in its entirety, since I want to pick up more on the background references, running gags, and brick jokes.

So what do I think of Welcome to Hitlerland, our last look at Danger 5? Do I think it’s a worthy series finale? Yes and no. There’s plenty I liked along with plenty of stuff I didn’t like. For stuff I liked, I liked how it played up the stakes as the ultimate confrontation between Danger 5 and Hitler along with tying the show together through references and jokes. For stuff I didn’t like, I wasn’t crazy about how some of the character stories ended, and the final battle left me wanting. In the end, while I think it could have been stronger, I think Danger 5 went out as one of the best genre parody stories we’ll ever get, and for better or worse I’m glad I went on this ride.