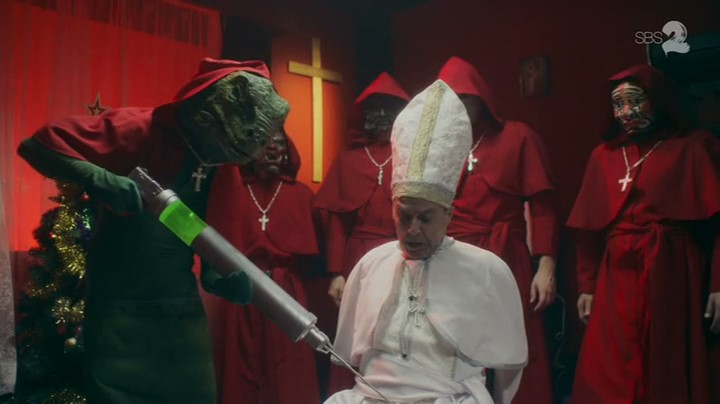 We’re at the official halfway point of season 2 of Danger 5 with Un Sacco Di Natale. Now, this is going to sound bad, but after watching Un Sacco Di Natale, I’m starting to remember why I didn’t rewatch the latter half of this season. The episode, while it has good humor and funny action, suffers from the same issues that plagued Kill-Men of the Rising Sun back in season one.

Namely, it features some pretty unsavory opinions and actions. Sure, maybe they were prevalent in the 80’s. Even then, it doesn’t help are pretty fucked up even when played ironically, and I’m not so sure that’s the case this time. Honestly, I think this is the episode people look to when they say season 1 is better. I mean, this has all of the season 2 flaws packed into one place, and I’ll tell you what they are.

Un Sacco Di Natale takes place entirely in Vatican City, on the night of the New Years Disco Mass. In an apartment overlooking St. Peter’s Basilica, Hitler is bound and gagged by the Nazi Cabal that took him hostage at the end of Revenge of the Lizard Men. Here their plans are laid out. After removing Hitler as leader of the 4th Reich, they plan on pursuing world domination by taking over the Catholic Church. After some groin focused torture, they lock Hitler up in an iron coffin chamber and fill up the coffin with some green goo for Hitler to drown in. Once complete, the cabal launches its plan for world domination.

Unbeknownst to the Nazi Cabal (at least at first), Danger 5 is also in the Vatican. While Tucker, McKenzie, and Holly stay behind in Pierre’s Vatican City mansion, the others are out in the field. Pierre is out celebrating the New Year in his usual style. Jackson is working recon, stationed in an apartment across the street from the cabal meeting place. Ilsa is rather unceremoniously dumped by Khrushchev after he accidentally let slip his intentions with Holly. Namely, he wants to replace Ilsa with Holly, and make Holly his princess of USSR-Land. She quickly goes to Jackson, either looking for solace or revenge against Khrushchev.

While the gang is distracted, the Cabal makes their move. Pierre stumbles across one Cabal member and quickly kills him in dismay. After some further mishaps, Pierre stumbles further into the plot. He quickly saves the Pope from the Cabal and ends up ruining the whole scheme of the Cabal singlehandedly. At the same time, a disfigured Rommel takes on Ilsa and Jackson in their apartment, subduing them quickly. Rommel, now with a woman’s body, attempts to make Ilsa jealous by sleeping with Jackson (against his will). This only makes her laugh. Eventually, she decides enough is enough and she puts Rommel down for good.

While this is all happening, Tucker attempts to find solace in Pierre’s pill collection. Once the trip starts, he finds himself in a pleasant daydream populated by Claire and his family. Realizing the danger, McKenzie enters the daydream to try and bring Tucker back to reality. After some push back from Tucker, McKenzie manages to bring Tucker out.

Unluckily for the team, Khrushchev makes his move while McKenzie and Tucker are distracted. After a chase scene filled with collateral, damage, Khrushchev manages to capture Holly and takes her to the Soviet Union. The team then confronts Hitler, who managed to escape the coffin and shoot him to death. However, even death doesn’t seem to take, since Hitler quickly shoots Satan dead, and takes over Hell.

So yeah, I said Un Sacco Di Natale has some issues. I boil them down to 2 reasons. There are problematic sexual politics on display with a good helping of bad story and character decisions. For the sexual politics, the biggest offender is easily the scene between Jackson, Ilsa, and Rommel. On one level, they attempt to play what is essentially the rape of Jackson by Rommel humorously or at least present it as so. I mean, how else are we to interpret Ilsa’s glee at the scene?

Look, playing the “rape as black comedy card” is an extremely fraught tight rope to walk. The only example I can think of off the top of my head that played it successfully is in one of the resort demonstration scenes in The Lobster. Un Sacco Di Natale plays it in a way that’s not only rather fucked up but hopes at least some of us laugh along with Ilsa as Jackson struggles to getaway. While the idea of a man being raped by a woman might have flown back in the 80’s, it’s hard to take lightly nowadays due to the greater knowledge of the emotional trauma it causes.

There’s also a heaping dollop of trans-phobia thrown into the mix. Like, how else are to take Rommel becoming a woman solely to get revenge against Ilsa by assaulting Jackson. Granted, Rommel was a notorious Nazi. Even then the heaping pile of trans-panic is hard to ignore, seeing as it plays into both the harmful stereotype of the “depraved homosexual” and the “depraved transsexual”.

This whole situation is comparable to Kill-Men of the Rising Sun and its use of yellow-face. While it may be using these tropes to reflect the attitudes of the times, it does so clumsily enough where you can’t tell if the trope is being played seriously. This gives the show an ugly black eye that will never go away.

Plus, that’s not even getting into the other scene I had in mind. I’m talking about the scene in Pierre’s pill closet before Tucker starts gobbling them down. At that moment, it looked like Tucker was legit thinking about pulling an Ed Kemper move on Claire’s head. For those who don’t know, Ed Kemper was a serial killer who operated in the late 60’s and early 70’s around the Santa Cruz area. What makes Tucker like Kemper in this situation is that Kemper was a necrophiliac who liked having sex with the decapitated heads of his victims. So yeah, this episode plays with dark subject matter both unnecessarily and not very well in my opinion.

My other big issue with Un Sacco Di Natale comes from poor character and story choices. In terms of the story choices, beyond the Jackson and Ilsa scene, I don’t like how quickly they disposed of the idea of dissent among the Nazis built up in Revenge of the Lizard Men. Granted, there are only three episodes left. If we assume Khrushchev serves as the main antagonist in the next episode, plus the one episode that deals with time travel, there isn’t much time left for the cabal. That said, I wished they built up the idea more. It’s an intriguing plot element that feels like it was dealt with too easily. I mean, Pierre essentially Forrest Gump’s his way into foiling their plans all by himself.

When it comes to character choices, I don’t like the scenes involving Tucker and Holly. When it comes to Tucker, it not only feels like the show creators are making him darker, but it feels like they’re spinning their wheels on what to do with Tucker. Granted, it’s only been at most a week or two in-universe since Claire was murdered. That said, we’ve been dealing with Tucker doing nothing but go mad from grief for 3 episodes now, and they largely all play out the same way. To put it bluntly, it’s getting rather boring. They should either make him come to terms with Claire’s death already or just lean into him becoming a psychotic madman.

Holly is also in true form this episode, being the most annoying she can be. I know a fair amount of criticism of season 2 comes from the importance she has on the overall plot despite how little she does. In Un Sacco Di Natale she’s the true definition of the millstone. It’s to the point where I kind of want her to be kidnapped by Khrushchev. The worst part is that these issues with Tucker and Holly could be fixed very easily. Namely, give them shit to do other than sit around.

With all that said, there are things I like about this episode. This is a great episode for Pierre and McKenzie. They each provide a fair amount of humor while also showing us what they’re capable of. I mean, McKenzie is the only one who’s keeping Tucker alive at this point, both at a personal level and a storytelling level. Meanwhile, Pierre gets into all sorts of shenanigans. He saves the Pope, who later pulls a big damn heroes moment and saves him in return. He also saves the Catholic church by stopping Das Pope, the Nazi pope puppet. In a way, he saves the world singlehandedly, all by taking out the Nazi cabal and stopping their scheme.

Speaking of the scheme, while I do wish the cabal was built up more, I thought the scheme itself was interesting. It’s based on the Ratlines of post-WWII, where select members of the Catholic Church helped Nazi war criminals escape Europe. It’s an interesting historical parallel I wasn’t expecting in a show not exactly known for historical accuracy. The scheme also provided some of the best laughs when given that good ol’ Danger 5 wacky style I’ve come to know and love.

Lastly, while there’s no more cabal moving forward, they at least are building Hitler up as the most evil being in existence. I mean, how much more evil can you get than immediately destroying the personification of wickedness? This means that when we take Hitler’s prior effectiveness, the cabal’s immediate failure, and the burgeoning scope of his evil, he looks positively terrifying.

So, in short, Un Sacco Di Natale is a frustrating episode of Danger 5. While it does have some great laughs and a fun main scheme, the episode is saddled by some very problematic material along with general storytelling issues. The worst part about all of this is that most of these flaws can either be dealt with by simply cutting the material or with a simple fix. I mean, how important was it to bring back Rommel? Or how about giving the dead weight characters stuff to do and tying the plots together. Here’s hoping this isn’t going to be an ongoing trend going into the final stretch.