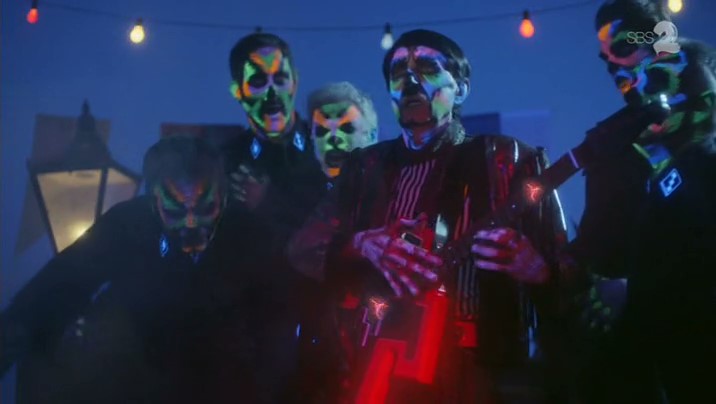 You might be asking how the show proceeds after Un Sacco Di Natale in Super Dead. It’s a solid question since Hitler was killed by Danger 5 and is now essentially ruler of hell. The answer to that, it turns out, is rather simple. There’s a fucking metal as shit zombie apocalypse. After rewatching Super Dead, I honestly can’t recall why this wasn’t on my rewatch list from my first watches back in college.

Besides some problematic elements, this is easily the most fun episode of season 2 since Johnny Hitler. What’s more, it’s straight up the most emotionally provocative in ways I didn’t think I could feel, even after watching this show fully at least once before.

Super Dead starts in a club in West Germany. Danger 5 is celebrating Hitler’s death with a rad metal concert. They even add to the metal-ness of the concert with Hitler’s body on display in a coffin on stage. Everyone is having fun until Hitler’s body wakes up, and starts biting people. The club is quickly overrun by Nazi zombies. What’s more, the situation goes from bad to worse when Hitler summons “Rock Wolf, the Nazi Caster” from the grave.

He leads the zombie horde to the Berlin Wall, blowing it up with a strong lick on the Rock Wolf. The wall in shambles, Hitler leads a zombie invasion of U.S.S.R.-Land, which turns out is an amusement park. Hitler and his undead army quickly find Khrushchev and Holly. After a quick solo that blows up the heads of the park patrons (citizens?) around them, Khrushchev abandons Holly to Hitler and flees to the Winter Palace. Danger 5 quickly arrives by helicopter, blowing up Nazi zombies from the sky. Ilsa spots Khrushchev trying to get inside the palace and attacks him with the copter. Khrushchev responds by blowing them out of the sky with a rocket launcher, and the gang is separated in the crash.

The main group, comprising of Pierre, Tucker, and McKenzie run into Holly, re-kill Hitler’s zombie body. Unsure what to do next, they try to hole up from the zombie horde. While they are in the store, McKenzie gets bitten by Claire’s newly zombie-fied head, saving Tucker from his stupidity. Despite his best efforts, McKenzie succumbs to the zombie bite and dies while Tucker and Holly explore the park.

Jackson, meanwhile, heads to the palace to take on Khrushchev in one last attempt to woo Ilsa. As he puts it, this last-ditch maneuver is his “ticket out of the zone”. Unsurprisingly, he is quickly captured by Khrushchev’s men. He has a nightmarish encounter from his past and an equally odd escape. Now free and pissed off, Jackson goes on a rampage, slaughtering scores of Khrushchev’s minions on the way to the man himself.

Meanwhile, Ilsa, despondent from everything, gets trapped in a claw machine by the zombie horde. She is then saved by her father, who owns said claw machine. After a tense but ultimately hopeful family reunion, father and daughter go to the palace so that Ilsa can get her revenge against Khrushchev.

It’s here we reach the dual climax. Outside in the park, Holly is convinced by Hitler, whose spirit possesses a teddy bear, to go on a roller coaster. Tucker and Pierre then quickly give chase. After a small hope spot, Hitler’s spirit possesses Holly and uses the roller coaster to travel back in time. In the palace, Ilsa and Jackson regroup. Despite his offers to help, Ilsa tells Jackson to stay out of it while she takes care of Khrushchev. She then fucks him to the point his face melts ala Raiders of the Lost Ark. Pierre and Tucker then crash through the ceiling as the world starts to crumble around them, due to Hitler messing with the space-time continuum. With no other recourse, Pierre takes the gang back in time with some time travel cocktails.

So yeah, Super Dead was an interesting episode, to say the least. I’ll start with the material that’s spoofed, seeing as that was what helped pull me in the most. This is another case, like in Johnny Hitler and Lizard Soldiers of the Third Reich, where a lot of my enjoyment came from recognizing the various references being thrown around. I dug how Super Dead pulled from some of the more fun 80’s horror classics aka the goofier ones. There’s Return of the Living Dead most prominently. If you want an idea of what Return of the Living Dead is like, pull up a trailer and you’ll understand instantly. There’s also Child’s Play, what with the spirit of an evil man possessing a toy. Then, in the end, Super Dead pulled a straight-up Back to the Future move. It even included getting the roller coaster car up to the speed of 88 mph to jump through time.

I’m sure there are more references I’m missing, but what matters is that everything came together in an incredibly funny (I mean, how can you not laugh at the family running into Holly at the Anti-America museum?), surreal, and metal as shit milieu. I mean, when will we ever see Hitler breaking down the Berlin Wall and blowing people up through the sheer power of a heavy metal guitar solo again? Full disclosure, I have loved heavy metal music since high school, so this episode spoke to me.

From the perspective of the season-long plotline, things are not only starting to come into focus, but some season arcs are getting concluded. This is good since there are only two episodes left of the entire show, let alone the season. For example, one thought that has probably been in people’s minds this season has been partially answered. Namely, why exactly is Hitler so fixated on this useless Valley girl from America?

The answer is simple. He wants to use her body to achieve immortality, using her healing ability. We still don’t know the “how” or the “why”, but it’s a very interesting answer. Even knowing just the “what” of the scheme gives us an idea of how dangerous Hitler could become. I mean, Hitler could very easily pull a move like Aku in the Samurai Jack revival and just wait for Danger 5 to die of old age if he wanted, leaving the world open to domination. What’s more, that’s just one low energy option. If he’s immortal and indestructible, he could do anything.

We also get a conclusion to the Ilsa-Jackson-Khrushchev-Holly love polygon that’s been going on in the background of this season. Ilsa gets her revenge against her husband for abandoning her. If I’m honest, I thought they were merely dating, so the marriage reveal makes Khrushchev extra cold and slimy. We also get Jackson’s last attempts at winning Ilsa over and how it’s snuffed out for good. For Jackson fans, it’s a bitter pill to swallow. I mean, just listen to his voice when Ilsa says she’s got this. That said, it’s a good one to swallow. It’s time he moves on. Plus, the cowboy that frees him is starting to put things in this season into a new light for Jackson, which is interesting moving forward. For Ilsa, her revenge is not only revenge but now a chance to rebuild her romantic life, maybe even as Snow Maiden of Russia.

This is also a good time to hit up my favorite aspect of Super Dead. Namely, the characterization. Man, these characters made me feel things. With Ilsa, we start with her not getting any sympathy for her plight from her teammates, and even her own family at first. By the end though we get an Ilsa who has found some love and support in her quest for revenge, with hope for her future. It’s a great episode for her, even though one of my biggest gripes still deals with her. Plus, finally getting to know the life of one of the most mysterious members of the team (barring Pierre) reconfirms why she’s been one of my favorites the whole season. I mean, she’s both figuratively and literally a queen.

Speaking of Pierre, this was an unexpectedly emotional episode for him. Not only do we once again see him being the most effective member of the team, he also feels the most pain. I mean, he has to play out McKenzie as he dies from the zombie bite. It was honestly the closest I’ve come to feeling verklempt this whole show. It goes to show that Pierre is the beating heart of Danger 5 and also reconfirms why he’s my other favorite character.

Lastly, fuck you, Tucker. Seriously, fuck you. You dare act like you’re leading this team after being useless this whole season. The only helpful thing you’ve done this entire time is killing Mendes in Johnny Hitler. All you do is fuck shit up and not even apologize for it. I mean, McKenzie would still be alive if it wasn’t for Tucker’s grief-induced stupidity.

What’s worse, he doesn’t even acknowledge his role in McKenzie’s death, even after everything McKenzie has done for him. It’s also Tucker’s fault Hitler escaped to the past. At least Holly has the excuse of just being a teenager unwillingly dropped into the world of super spies for her uselessness. Thankfully the rest of the team is getting tired of his bullshit, so maybe that’ll change this burgeoning psychopath around.

There are only a few things I didn’t really like this episode, or at least questioned. First and foremost, I’m not crazy about how the show writers went back to the “rape as revenge” plot point to conclude Ilsa’s story. Granted it’s not as random as in Un Sacco Di Natale. It also has more emotional weight behind it, since Ilsa’s whole season arc revolves around her relationship with Khrushchev. Still, it’s something that can leave a bad taste in the mouth.

Speaking of Khrushchev, he doesn’t do too much this episode villainy-wise, even compared to the Nazi cabal in Un Sacco Di Natale. He acts more of a goalpost for the characters to move past in their arcs instead of an actual adversarial force. That said, I’m largely able to move past it. It helps that unlike the Nazi cabal in Un Sacco Di Natale, the Nazi zombie horde is the main adversarial force of the episode. If the zombie horde wasn’t there, I’d have a much bigger issue with it.

So other than a few bumps in the road, Super Dead puts Danger 5 back on track in terms of episode quality. It gives us some rich characterization and concluding season arcs while laying the groundwork for an interesting series finale. With only two episodes left, I’m thinking that if the show maintains the quality of Super Dead, the show will end on a strong note. I’m also just really happy I rewatched this episode. It’s finding new enjoyment out of shows I might have overlooked that makes Off the Beaten Path worth it, and Super Dead will for sure be one of the episodes of Danger 5 I rewatch whenever I inevitably return to the show.