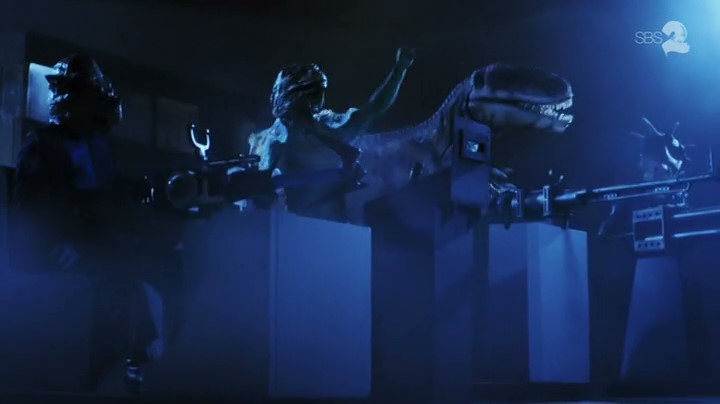 Alright, so you – you incredibly beautiful soul of a reader – might be asking where Danger 5 might go in Revenge of the Lizard Men. That’s a fair question now that our intrepid band of bumbling spies are on the lamb. The answer to that is more running, and the return of (big reveal here) the dino-soldiers from season one.

Along with Johnny Hitler, Revenge of the Lizard Men was the other season 2 episode I would rewatch. This was because Lizard Soldiers of the Third Reich was easily my favorite episode of season 1, and Revenge of the Lizard Men acts as a quasi-sequel. That said, this is the first episode I’ve seen of Danger 5 on my rewatch that has dropped in my estimation. This downgrade caught me a bit off guard, and I’ll tell you why.

The episode starts with Metro City U.S.A. on lockdown after the events of Johnny Hitler. Law enforcement is working day and night to find our intrepid band of heroes. They even have Hitler and a still alive Mengele providing support. Danger 5, along with a very bored Holly, are holed up in one of Pierre’s many night clubs. Some, like Pierre, try to make the best of a bad situation. Others, like Jackson, drive themselves crazy.

Very quickly though the team starts sabotaging themselves. Ilsa accidentally drugs herself and Pierre with a drug orange, and she quickly splits off with Jackson to sleep with him. Tucker, motivated by something only his crazy mind can process, calls the police. He tells them he has Holly as a hostage at the mall and goes off with Holly to confront Hitler and his unwitting police force.

Meanwhile, dissent is forming among Hitler’s underlings. In a police locker room, Mengele creates pills from some Quato-esque lizard in his abdomen (who goes by Mr. Pedro). Mengele and Pedro debate about whether Hitler is worthy of leading the Fourth Reich. They only stop when the Fuhrer appears to put down Mengele for trying to recreate Claire.

The police, going off of Tucker’s tip, launch a simultaneous raid on the mall (led by Hitler) and Pierre’s nightclub (led by the police chief). During the nightclub raid Pierre, Ilsa, and Jackson are all arrested and taken into custody. At the mall, Tucker goes full-on slasher movie villain as he hunts down the team sent after him. At the station, we quickly find out what exactly the pills Mengele created do. Namely, they turn everyone who takes the pills into full-on dinosaurs. Unsurprisingly, the police dinosaurs quickly go on a rampage in the station.

During the confusion brought on by the rampage, Ilsa takes down Mengele, leaving Mr. Pedro to fully emerge. Mr. Pedro then proceeds to launch his plan to take down Hitler. He takes some goons to the mall, where they kidnap Hitler before Tucker can kill him. The team (sans Pierre) quickly regroup and give chase to Mr. Pedro and his lizard goons. The chase ends after Holly sustains some truly brutal battle injuries. This gives the lizard men their opening to escape with the captive Fuhrer. The episode ends with the team lamenting Holly’s demise, only to be shocked when she miraculously comes back to life fully healed.

So yeah, a lot happens in this episode that I skimmed over for some semblance of brevity. I’d go as far as to say Revenge of the Lizard Men is the densest episode of Danger 5 yet in terms of sheer plot density, both for the episodic plot and the season arc. This is both a positive and a negative. On the positive side, we get a fair amount of character development for the main crew.

For instance, we get a ton of character developments. There’s the romantic tension between Ilsa and Jackson, which will grow as Ilsa grows more and more suspicious of Krushchev’s motives. Holly’s role in the greater narrative is also growing. I mean, the end reveal alone adds to the mystery of Hitler’s designs for her. Lastly, there’s Tucker’s growing post-Claire insanity, which grows by the episode. Out of all the characters, Pierre is largely on the periphery. His role in this episode is limited to creating laughs but not much else of note. As much as I love Johnny Hitler, there wasn’t much in the way of forward momentum for the character arcs for the main cast. Thus this is the first time since Merry Christmas Colonel where we start moving beyond setup into the arcs the characters will inevitably follow.

We also get some interesting secondary villain development. On the one hand, we have the growing dissent among the remaining Nazi leadership. We don’t know exactly why they’re rebelling yet, just that it’s been a long time coming, but I bet it has to do with Holly. This is something we never really saw in season 1, what with the secondary villains only lasting for an episode at most. Thus, this is an interesting development.

Also acting across purposes from Hitler and Danger 5 is Krushchev. With him growing impatient with Ilsa, he’s likely more willing to act rashly against anyone who gets in the way of his plans for Holly. All this creates an interesting tableau from which any number of 80’s style shenanigans can emerge from, whether humorous or action-packed.

On the negative side, Revenge of the Lizard Men is so full of plot developments that it feels half baked compared to other episodes. For a solid example, look at Mengele’s role in the plot. Other than to have an excuse for bringing some fun ass dinosaurs back into the mix, I’m not sure what role Mengele and his pills were supposed to play in the greater scheme. The only thing I can think of is to create an excuse for the team (and the season plot) to move beyond their police pursuers.

The scheme of the episode, while often simple and cartoonish in its villainy, will usually serve some greater and distinct purpose for Hitler’s plans for world domination. The scheme in Revenge of the Lizard Men, however, doesn’t ever get explained nor does it make sense when you think about it. I mean, why is Hitler trying to convert the police force into dinosaurs? Wouldn’t that blow his cover? This is especially bad when you look at an episode with a much tighter scheme like Johnny Hitler, or all of season 1.

Mengele himself, despite being the best secondary villain of season 1, is merely a throw-away character in this episode. He exists merely to introduce Mr. Pedro and reintroduce the dinosaurs. After that, he’s rather unceremoniously killed off (for real this time) by Ilsa. I mean, I could see him being a foil for Tucker in how they grieve for Claire, but even that feels rather flimsy to me. Also, there is the distinct possibility that we would have learned more about Hitler’s scheme involving the dinosaurs if it weren’t for his capture. That said, I get the feeling if that was the case Russo and Ashby would have given us more info about Hitler’s thought process instead of leaving us in the dark.

Other stuff is left in the dark in terms of motivations. Like, why did Tucker call the police on himself? Was he just trying to get to Hitler? Was he trying to vent his anger on the police as a whole? Is he also just completely insane? Who knows really. It’s frustrating to me the episode is this loose in terms of story. Everything I’ve mentioned could be fixed through some simple dialogue. Like, a scene or two involving Pierre and/or McKenzie could tie everything together and illuminate what’s unclear.

So what did I think of Revenge of the Lizard Men? To put it shortly, the positives revolve around the season getting a kick start in terms of narrative momentum while introducing us to greater mysteries of the upcoming plot. On the negative side, it’s so chock full of plot it loses sight of itself in the moment. Thus it ends up a half baked collection of events hastily strung together by contrivance. All this comes together in an experience that while frustrating at times is still a very enjoyable ride. Here’s hoping this is a one-off. Our heroes have only 4 episodes to go, with loads of questions to solve and numerous enemies to defeat.