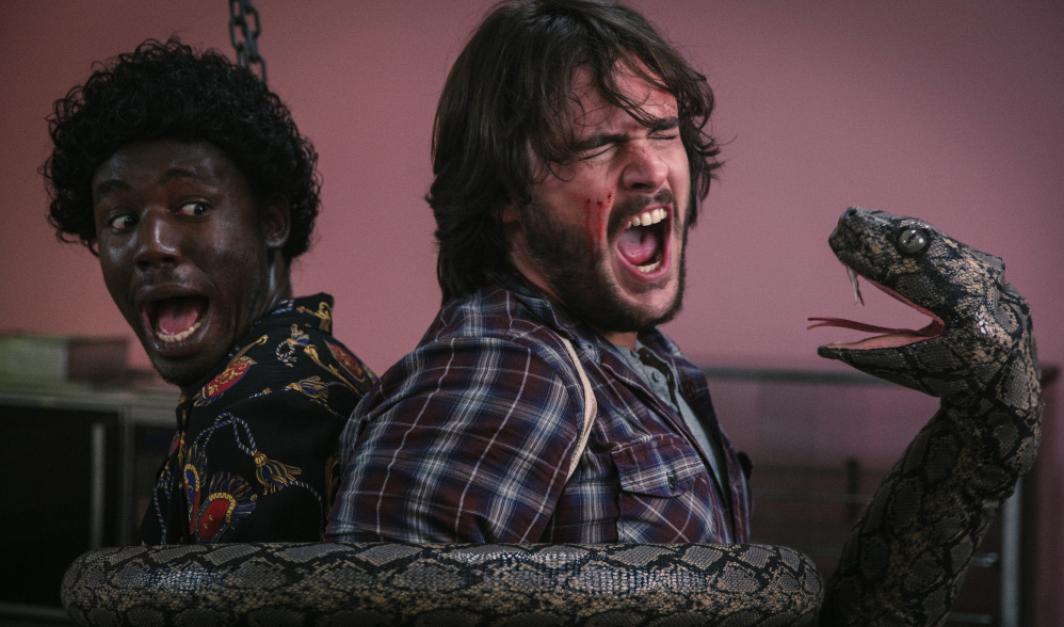 Now the style has changed from the 60’s style WWII to 80’s style early 60’s Cold War. If you’re confused by that description, think of it this way. The world is styled like the 80’s but is filled with political figures and events pulled from the 50’s and 60’s. Because of this stylistic shift, Merry Christmas Colonel, just like I Danced for Hitler!, has to do double duty. It has to re-establish the world of Danger 5 on top of telling an entertaining story. I bet you’re asking if Merry Christmas Colonel is successful in achieving that goal… so let’s get into season 2.

A quick word about the story structure of season 2. Compared to season 1, episodes of season 2 are much more serialized. While there is still a mission of the week, the storyline builds with each episode. This means you can’t exactly watch the episodes out of order and still understand everything going on like in season 1. That said, by sacrificing the 60’s style status quo the first season adhered to, season 2 can delve into the world of Danger 5 and all its insanity.

So let’s dive into the story of Merry Christmas Colonel. The episode starts with a rather disheveled Colonel Chestbridge, doing some Christmas shopping in your typical mall. All of a sudden, he’s surrounded by a very much alive Hitler – in disguise as a mall Santa – and two goons. Chestbridge manages to kill one of the goons but is brought down by Hitler and the surviving goon, who’s later revealed to be Otto Skorzeny aka Carlos Mendes.

We then catch up with most of the old team. Jackson, now a grizzled cop in Metro City USA, lives a rather depressing life plagued by Korea flashbacks and loneliness. He has never gotten over Ilsa and indulges in Russian hookers who pretend to be Ilsa.

Pierre (now played by Zimbabwean actor Pacharo Mzembe) on the other hand has truly been living the high life since WWII. Since the war, he has used his ability to be everyone’s friend to become the greatest musician (with over 1,000 no.1 singles) and greatest entrepreneur (with over 1,000 fashion lines and 1,000 nightclubs) in history. When we catch up with him, he is performing at his fashion show in Tokyo, enjoying the endless stream of cocaine and beautiful women with his Japanese butler McKenzie.

Lastly, we see Claire and Tucker. They have just gotten married and are enjoying their wedding reception. Once we’ve been reintroduced to these 4 that the plot kicks in. There are simultaneous assassination attempts on all of them. These range from a mundane hit squad sent after Pierre, to giant floating prawns are sent after Tucker and Claire. After escaping every assassination attempt, the group (minus Ilsa) learns the news about Chestbridge’s death, reunite, and decides to avenge his death.

Danger 5 travels down to Argentina in search of Mendes. This is because Mendes, an escapee Nazi, has been hiding in Argentina under the protection of Peron. Once there the team quickly splits up. Pierre and Jackson go investigate the streets for clues on Mendes’ whereabouts. Tucker and Claire meanwhile do their own thing. In this case, she tries to do spy stuff while Tucker tries to make the trip their honeymoon. It’s around this time we finally catch up with Ilsa. She has gone undercover as a dancer/Mendes’s lover under the orders of her boyfriend Nikita Khrushchev to find out Hitler’s schemes and foil them when she can.

Eventually, she discovers the scheme. Hitler is targeting an American high school senior living in the Midwest. She is then ordered to blow up Hitler’s superyacht. After some misadventures, the team starts to reunite, culminating in a full reunion on the dining deck of the superyacht. There they encounter Hitler, who was masquerading as Tucker and Claire’s tour guide. With the whole team there, Hitler immediately opened fire on the team. After a brief struggle, Claire is decapitated by Mendes, with Tucker managing to catch her flying head. The remaining team members then escape the yacht before it explodes. The episode ends at Claire’s grave (though Tucker still has her severed head) with their next mission in mind. Namely, to get to the mysterious high school student before Hitler does.

So yeah, Merry Christmas Colonel had a lot going on. More so than any prior episode in fact. I’m not gonna lie, this was not one of the season 2 episodes I would revisit over the years, and boy do I regret it. This episode is a hilarious roller-coaster ride that serves as a pitch-perfect introduction to the new world we find ourselves in.

So what exactly did I like about it? Well first and foremost, I loved the world-building. Like I said earlier, Merry Christmas Colonel had quite the task. It had to do a few things to succeed. It had to reunite us with the world and characters of Danger 5 while introducing us to the new status quo. It also had to tell a cohesive story. In particular, I loved the two sets of establishing scenes aka the scene of Chestbridge’s death and the scenes reintroducing us to Danger 5 (barring Ilsa).

With Chestbridge’s death scene, we immediately are transported into the 80’s. There’s the super mall during the Christmas season. There’s the music, heavily influenced by some old school techno. On top of all that, there’s the hyper-stylized violence. Looking back at season one, he only death that even compares is Mengele’s at the hands of his dino-soldiers. We also get familiar elements in this scene that remind us this is Danger 5. We get Chestbridge and the return of his sit down gun from season 1. For someone new, we have Mendes, who has a wolf head and speaks perfect Spanish). Most of all, we get Hitler. In other words, it’s a near-perfect establishing scene, just like the Eiffel Tower theft in I Danced for Hitler!.

Once we get reintroduced to the members of Danger 5, we are further brought into the 80’s.  Everything is either bright and colorful (like Pierre’s fashion show), or dark and seedy (like Jackson’s apartment). The drugs of choice are cocaine and more cocaine. The violence and the titillation is turned up to eleven. I mean, there is a not-insignificant amount of cocaine-fueled motor boating, broken arms en masse, and fresh flowing blood. People even finish fights with snappy one-liners. Jackson, in particular, is fond of this.

Even the cinematography plays a role. In season 1, everything deliberately felt like it was lit and shot on a closed set. I’m fairly certain they went for a three-camera setup whenever possible. In season 2, the lighting and cinematography feels more cinematic, exclusively using a one-camera setup. This makes the world appear more real while also highlighting the absurdity of it all. Yet all the while, the world is distinctly Danger 5. It’s packed to the gills with absurd humor that pokes fun at the tropes and stereotypes while also playing them straight. Like I’ve said before, this show is most comparable to Mel Brooks’s style of a loving parody.

Even with the new era, we still see each character are still themselves, if not given some 80’s style exaggeration. Pierre is still the fun-loving partier, just now on a global scale. Jackson is still the hyper-American maverick now reeling from the effects of the cold war. Ilsa is still secretive yet sensual Soviet, now with differing agendas compared to her old WWII allies. Tucker and Claire are still the straitlaced duo, though with the potential to completely go off the rails (I’m looking at you, Tucker).

Even Hitler is up to his usual schemes. Instead of operating on the world stage, he now operates from the shadows. This gives him the anonymity to be truly dangerous on a personal level. I mean, look at all those arms he snaps later in the episode. It’s quite a feat. These groups of scenes are microcosms of what season 2 offers us, and they leave me wanting more from the season as a whole.

Besides the humor, which is on point, I’d like to give a shout out to how this show decides to buck the status quo. Many other comedy shows would likely take the safe route. They’d continue to do whatever works without batting an eye. Not Danger 5. I mean, at the most basic, season 2 could have continued down the established 60’s style world they created. Instead, they went and essentially tore everything down and rebuilt it with the shiny veneer of the 80’s. There’s also the story serialization. This can be a risky transition, especially if some plot element doesn’t land and we’re stuck with them. The episodic status quo of last season, in turn, kept those unsavory elements rather self-contained. Most importantly though are the risks they take with the characters, especially with Pierre and Claire.

With Pierre, changing up the casting from Mignone to Mzembe in such a blase way could be alienating to viewers. What we get in Mzembe is a truly welcome addition. In fact, I often go back and forth between who I prefer as Pierre. Mzembe brings the enthusiasm and good vibes of Pierre to the 80’s while also adding in more surreal humor. With Claire, it takes some balls to kill off a main character, especially this early in the overall story.

This is the kind of move that could very easily draw criticism, especially if they don’t play it well going forward. That said, I appreciate the risk taken, along with all the risks taken. I bet at this point Russo and Ashby knew there wasn’t going to be a third season of Danger 5. So them just saying “fuck it, let’s go nuts” by shaking up the status quo is something I appreciate, even if it doesn’t play out.

So in the end, Merry Christmas Colonel is a great success at what it does. Comparable to I Danced for Hitler!, it not only brings us up to date with the changes in the world of Danger 5, it serves as a solid base for the season arc to build on, and all the while just churning out tons of era-appropriate jokes and surreal humor. If anything, this is just a perfect example of the best thing about these rewatches. Namely, I get to re-experience these shows in a new way, gaining a new appreciation that I may have missed before. I mean, what else is there to say? In the end, Merry Christmas Colonel leaves me excited for what’s to come.