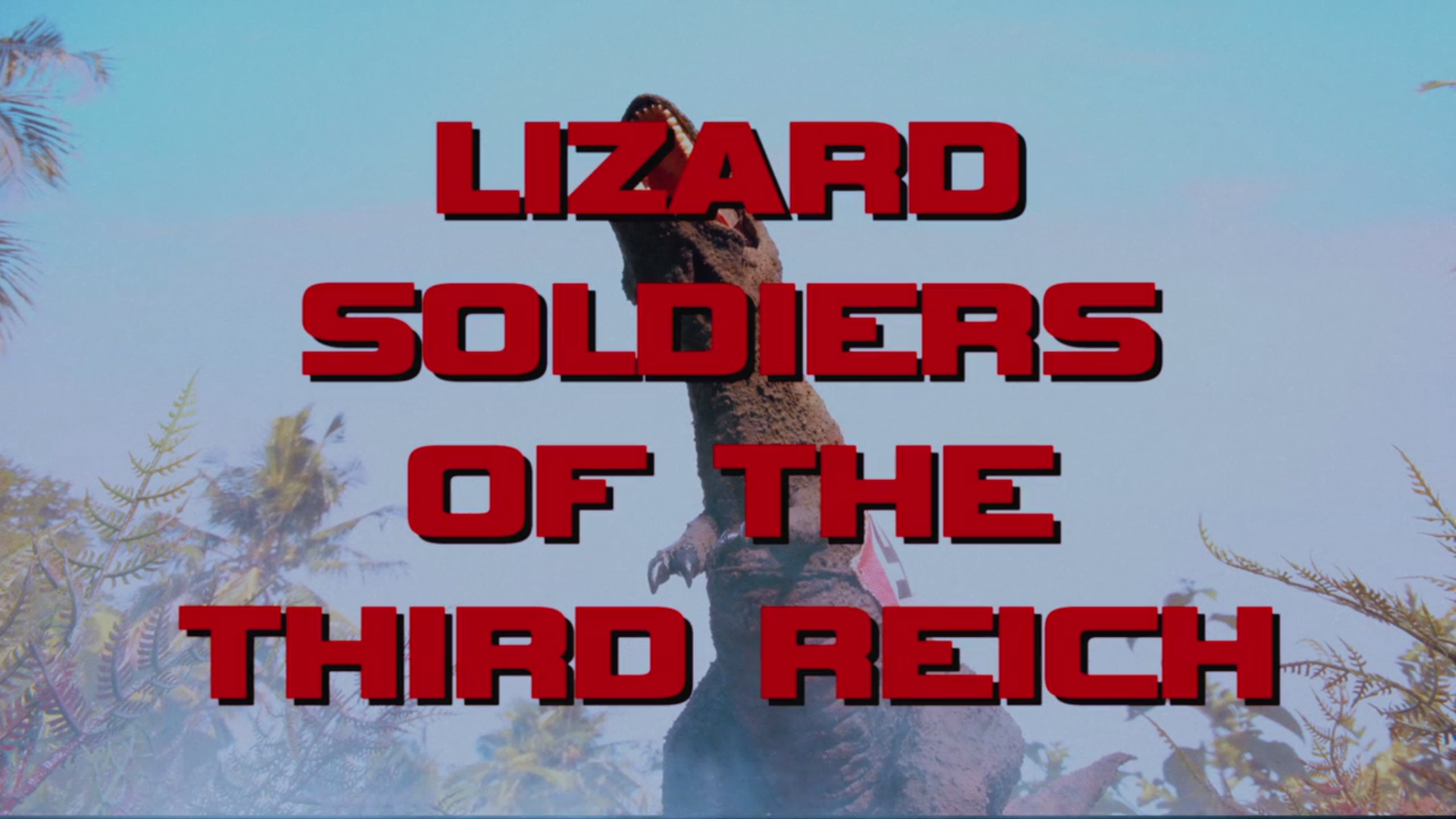 Now that we’ve gotten a taste of what Danger 5 has to offer in I Danced for Hitler!, it’s time we leap into the deep end of 60’s pulp insanity with Lizard Soldiers of the Third Reich. When I recommend episodes for people unfamiliar with the show, I usually recommend this episode as the season 1 rep. I mean, this episode has everything. It has swashbuckling adventures. It has some interpersonal romances. Hell, it even has dinosaurs with guns. I mean, if that doesn’t sell you on this episode, what more could you possibly want? Well, if you’re with me so far, let me explain why this episode is one of the best the show has to offer.

The episode starts with some squadron of hyper-masculine American troops, with plenty of homosexual subtext (mostly text). They attempt an assault on some Belgian village but are stopped by a Nazi tyrannosaurus rex. Danger 5 is thus given the following mission; find the source of the Nazi dinosaurs, destroy the source, and of course kill Hitler.

The trail from Europe takes them to Antarctica, where they find a tropical plateau untouched by time. The gang once again splits up. Pierre and Tucker leave to hunt for some food and supplies. Meanwhile, Jackson, Claire, and Ilsa stay behind to lounge in a hot spring. From there, each group independently find the source of the dino-soldiers. Dr. Mengele has discovered a crystal that allows for the mind control of any lifeform with a crystal implant, which he has put in all the Nazi dinosaurs.

Each group naturally finds out the truth on their own. Jackson, Claire, and Ilsa find the answer once they’re bamboozled by Dr. Mengele and taken to his volcano base. Meanwhile, Tucker and Pierre learn of the Nazis from the tribe of Amazonian warriors that captured them. Hitler also joins the mix, coming down to Antarctica to see Mengele’s progress. From there, many shenanigans ensue, involving gladiator matches, a jazz band made of Planet of the Apes-esque apes, and a Roman Empire-esque slave uprising. The gang all gets together at the end and stop Mengele’s scheme, but once again fail to kill Hitler.

I mean, look at all the references thrown around. On the story level, there are specific references to the following properties. We have The Lost World, because of the dinosaurs themselves and their Antarctic paradise. There’s also The Island of Dr. Moreau, seeing as Mengele is made to spoof Brando’s turn as Moreau in the 90’s adaptation. Day of the Dead, what with Mengel’s gruesome disembowelment by his zombie-like soldiers. We even have Planet of the Apes in the form of the group of intelligent apes. For things that are not specific, there are references to Amazonian fiction and gladiator fiction. In other words, Lizard Soldiers of the Third Reich is a rich tableau of any adventure pulp fiction that features elements of a lost world untouched by time.

We also see this denser and wackier approach at an individual joke level. For two of my favorite examples from Pierre and Tucker’s plotline alone. First, we have the Amazonian telling Tucker about Mengele through a thought transference tube that comes out of her forehead, cause man did that come out of fucking nowhere in the best way. Second, we have Pierre playing bongos with a troupe of jazz playing apes – styled like the chimps from Planet of the Apes – to get on their good side. I mean, can you see those happening on a Saturday morning cartoon?

So yeah, with so many things in play for 22 minutes, I could imagine a lesser show getting caught up and tangled in their world-building and plot lines. Lizard Soldiers of the Third Reich manages to avoid all that. Instead, it creates a fun romp where you don’t know what will happen next unless you’ve already seen the episode. It makes me think of Mel Brooks in the best of ways. Knowing his pension for making fun of Hitler, I bet he’d approve of the treatment of Hitler in this show.

I should also give a solid mention to the characters themselves. Namely, Danger 5 gets more interesting stuff to do. Plus it helps the side characters are a more entertaining bunch for me than the characters in the last episode (with an exception for the talking German shepherd). For Danger 5, this is the episode that lays the groundwork for the romances aka the thing every workplace comedy has by being a workplace comedy. These romances will define a lot of the character dynamics within the group for the rest of the show. For one pairing we have Tucker and Claire’s, filled with stilted and era-appropriate flirtations, especially at the end of the episode. For the other paring, we have Jackson’s growing attraction to Ilsa. I mean, you see him leaping to her defense quite a bit while also trying to be around her, I don’t know what else to tell you.

Sure, this may seem rather bland for such a densely wacky show. Rest be assured though, these romances get very hilarious, even disturbingly so (especially in season 2). With that in mind, laying the groundwork now is a smart move writing-wise. Also, more jokes are highlighting each of the characters and their defining personality traits. Look at Ilsa and Pierre (still my favorite characters) for example. At one point we get Ilsa winning a gladiator battle through breathing alcohol-fueled fire like some Soviet dragon, showing she’s hilariously badass. At another point we see Pierre playing the bongos so hard his hands catch on fire, showing his innate ability to bring people together through partying.

Per usual, the others of the group get stuff to do that makes them stand out. For example, Tucker has a whole character arc about learning to appreciate and to have fun with Pierre. We also get more interesting side characters than in the last episode. I mean, how can an alliance between the jazzy ape-men and the Amazonian women against an army of Nazi dino-soldiers not be entertaining? Seriously, please explain to me how. I’ll wait.

Also, I should shout out the villains. Hitler, while he once again doesn’t drive the plot, is given more to do compared to the last episode. The real star though is Mengele, the scientist, a self-proclaimed man of science. I mean, just compare Mengele to Goebbels in I Danced for Hitler!. Goebbels was just a sycophant. Mengele has everything befitting cartoonish supervillainy. He is made an entertaining mix of an ambitious, fearful figure, what with creating dino-soldiers and his plans for Claire. He’s also a bumbling, slimy nerd, what with everything he does. On a more meta-level, it’s nice knowing that if the real Dr. Mengele (who was famously as vain as he was a straight-up butcher) saw this portrayal of himself, it would drive him mad with fury.

So, in the end, what do I think of Lizard Soldiers of the Third Reich? As of now, it’s my favorite episode of season 1. It’s full to the brim with jokes and references to fun 60’s adventure stories while also laying more groundwork for the rest of the show. Like I said, it’s the episode I tend to show people who haven’t seen Danger 5, and now you know why. So, I’m going to drink a “perfect Carlos Sultana” and play my Maserucci Utility Guitar before leaping into my next review, Kill-Men of the Rising Sun.