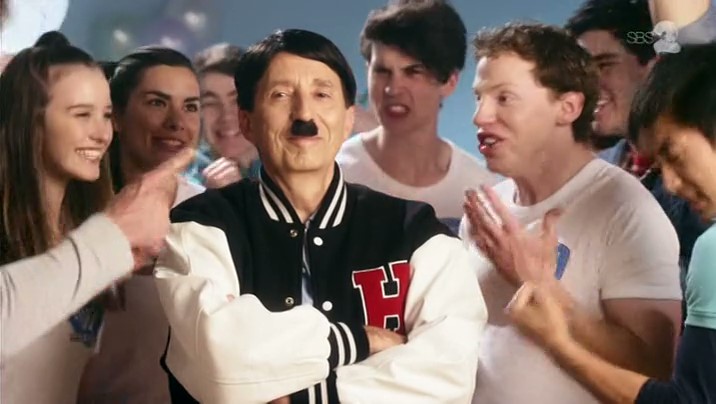 How many of you remember high school? Did you all have a great time and consider it one of the highlights of your life? Was it just a hellscape you dreamed of leaving as soon as possible every day? Either way, I can tell you one thing for sure. Your high school experience wasn’t nearly as surreal as what is displayed in Johnny Hitler. Watching this makes me wonder what the Australians think of our public school system.

I mentioned in my review of Merry Christmas Colonel that there were only 2 episodes of season 2 I would revisit over the years. Johnny Hitler was the main one. If I had to give a reason for this, I’d say it was due to how familiar it feels while being entertainingly insane. So let me explain what makes Johnny Hitler the most Johnny Hitler a Johnny Hitler can Johnny Hitler.

The episode starts in the high-school that seems to be the focus of Hitler’s schemes. Holly, a preppy blonde senior and the main character in the high-school, along with the student body at large, are fascinated by the new kid in school. He’s a bad-boy rebel from out of town, named Johnny Hitler aka Hitler in a letterman’s jacket. Meanwhile, Danger 5 prep to infiltrate the school to figure out Hitler’s scheme and stop it. Tucker plans on going in as a teacher, while the rest are going in as students.

Shortly after they arrive, the gang all get split up along two plot lines. Pierre and Ilsa remain at the school hunting Hitler and trying to stop the scheme. Per tradition, their plans quickly go awry. Pierre has his cover blown almost immediately because he’s so famous. He then spends the rest of the time hanging out with various high schoolers. Ilsa gets caught up in her task as secretly given by Krushchev, thus largely stays in the periphery.

Tucker and Jackson both end up out of the highschool plot. Their plots mainly revolve around Mendes. For Jackson, he immediately gets detention for pulling a gun on Hitler. To his horror, detention ends up supervised by Mendes, and he ends up fleeing for his life. For Tucker, he has a mental breakdown after encountering Hitler. Looking to get his mojo back, he receives ninja training from McKenzie with one goal in mind. Namely, to get his revenge against Mendes.

Before the group gets split up, we find out Hitler’s grand plans for the episode. Essentially, he wants to win over Holly, get her to be his date for the Christmas prom later that day, and be crowned king of the dance. The first part of Hitler’s plans go swimmingly. He wins Holly’s affections over a game of lunch ball against Pierre, impressing her enough that she asks him out. The last part of the plan goes awry for Hitler though. In this case, the student body votes for Pierre and Ilsa as the dance king and queen. This was because Pierre was so cool to the students and Ilsa being the hot, mysterious Australian foreign exchange student.

Hitler then goes on a complete rampage, slaughtering everyone he can like an old school slasher villain while Pierre and Ilsa get Holly to safety. Meanwhile, Jackson and Tucker ended up taking on Mendes in combat. After an intense struggle, they barely manage to win, with Tucker decapitating Mendes in kind. The episode ends with Danger 5 framed for the massacre at the school by a new FBI agent. This agent has come to help the police since there are no leads to be found. The agent’s name is Agent Hitler.

So as I mentioned in my intro, Johnny Hitler was always one of my favorites of season 2. This was largely for two reasons, which will be the focus of this review. There’s the story, which is just chock full of references, both to pop culture and itself. There’s also the humor, in all its surreal glory.

I’ll start with the references since a lot of the humor plays into the references. For me, Johnny Hitler is a lot like the second episode of season 1, Lizard Soldiers of the Third Reich in terms of appeal. Going back to Lizard Soldiers of the Third Reich, one reason why I loved it was that it was a glorious mishmash of 60’s inspired stories that I recognized. Namely, the combination of Ray Harryhausen’s effects and stories mixed with stuff from Planet of the Apes, Amazonian stories, and gladiator fiction.

With Johnny Hitler, it’s a similar case. This time, Russo and Ashby are throwing out the adventures in a faraway land for 80’s style high-school stories. Here are some of the references I picked up off the top of my head. There’s Ferris Bueller, what with Hitler’s entrance in the school. There’s Street Fighter, in the form of the battle between Mendes and Jackson and Tucker. We also have Neon Genesis Evangelion with Ilsa’s school uniform. There’s even references to A Nightmare on Elm Street with the score during the slasher sequence, along with being a slasher sequence. There are also plenty of story tropes straight from the 80’s that are pretty universal. I mean, how can an 80’s influenced story not feature a training montage?

There are even background references to previous episodes and storylines from season 1. For something of a background detail, there’s one from Lizard Soldiers of the Third Reich. If you’re curious, there’s a poster of the ape-men band in Pierre’s room. It helps adds some interesting continuity along with some solid rewatch value. For a more character-based callback, just look at Tucker’s breakdown. It’s very reminiscent of his breakdown back in Final Victory when he lost his shit when he thought he lost Claire. Honestly, it’s similar enough that I thought of Johnny Hitler while watching Final Victory. All of these play together to create a story that is, to put it lightly, completely wackity schmackity, but in the best of ways.

Which brings me to the surrealness of the episode. While Lizard Soldiers of the Third Reich are plenty surreal, Johnny Hitler is on another level. To me at least, this is because of one reason. Compared to the other episodes so far, this one deals with the team conducting a mission in a setting that everyone experiences. In the process, they turn high school, something that’s fairly mundane, into something that seems so exaggerated it might as well have been a pastiche created by an alien attempting to piece together adolescence through old school fiction.

This is combined and made even more extreme through the now patented Danger 5 lack of reaction to the truly outlandish. I mean, look at everyone infiltrating the school. With Hitler for instance, everyone treats him like he’s just some typical bad boy from out of town. That’s despite the fact he looks, sounds, and acts like a German dictator in his late 50’s at the very least. Hell, he was very much a world threat not that long ago even in the world of Danger 5.

Another great example is with Jackson. The guidance counselor treats Jackson like some 16-year-old hooligan instead of the man who looks closer to his 40’s. On a related note, the fact he was only given detention for drawing his gun in the school is insane to me in this age of secured schools. For an under reaction based on action, look at Mendes confronting Jackson in detention. I mean, Mendes shoots a kid to death and Jackson runs through a wall, and no one even bats an eye.

If there’s anything to complain about with this episode, it would be the introduction of elements to the overarching story that could strike people wrong. The first is this is the first episode to feature Holly, Hitler’s Christmas dance date and as of the end of the episode our replacement main cast member for Claire. Sure, she’s not bad in this episode. There are even some jokes that she provokes that I always find funny. That said, I remember her being a drain on the remainder of the season. Granted, this could certainly change with this rewatch, but it could just as easily color opinions about this episode for the worst if you don’t like her.

Another is the previously unseen supernatural elements of Hitler. The most obvious example is when he appears as a holographic head to Holly, Pierre, and Ilsa during his rampage. These feel like they come out of nowhere. Sure, I know this isn’t the last we’ll be seeing of the supernatural when it comes to the Fuhrer. Still, if you’re watching this for the first time I can easily see it being a surreal joke that’s too out there to be all that funny. That said, these are fairly minor complaints overall to the point I can easily ignore them in favor of just enjoying Johnny Hitler on its own.

So let’s wrap everything about Johnny Hitler up. In short, the surreal humor and the sheer density of references create an episode that, while more mundane for Danger 5, is easily the most surreal and also one of the outright funniest. It also brings us to the main narrative thrust of the season by introducing us to our new cast member Holly (for better or worse). It’s enough for me to largely ignore anything that I might consider a negative, which will help since I’m bound to keep rewatching Johnny Hitler for years to come, and I’m betting you will too.