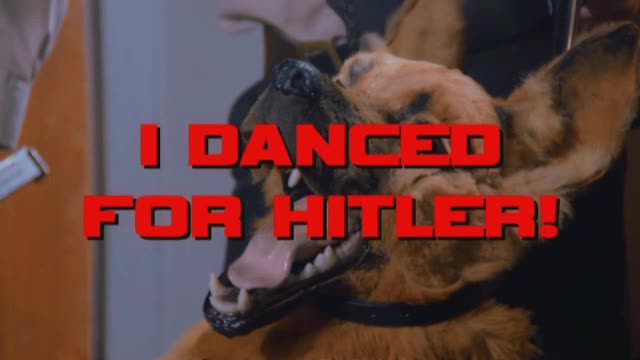 To kick off my reviews of Danger 5, we’ll start with the first episode for broadcast, I Danced for Hitler!. Compared to future episodes, the title might seem benign but don’t let that fool you. It’s anything but. As the first official episode – there was a YouTube pilot, but it was never broadcast on tv and Netflix – and our introduction to the wacky and surreal reality of Danger 5, I Danced for Hitler! had two goals. It needed to stick the landing with audiences and get them hooked. Safe to say, it does this with aplomb, and I’ll explain how.

I Danced for Hitler! follows a fairly regular structure in which all episodes in season 1 will follow. In Act 1, the Nazis kickoff the plot with some wacky yet evil scheme. Danger 5 is then tasked with stopping said scheme and killing Hitler. During Act 2, they will get split up. This is because they are doing their own thing and/or getting caught up by the forces of the episode. This often happens multiple times, with each group finding out the reasons for said scheme independently. These schemes are usually driven by one of Hitler’s underlings. They finally all get back together in Act 3 to stop said scheme and attempt to kill Hitler. It may be formulaic, but it’s all about the ride the story takes us on.

In I Danced for Hitler!, this inciting incident is the Nazi’s stealing national monuments from all over the world, starting with the Eiffel Tower. Danger 5 is thus tasked with finding out why the Nazis are stealing the monuments, and to kill Hitler. They quickly get split up by Nazis when they go to a French resistance bar ala Casablanca to investigate. They quickly find out why the Nazis are stealing world monuments.

The monument thefts are orchestrated by Joseph Goebbel’s, with two goals in mind. The first is to create a massive propaganda piece. In this case, the monuments are assembled Voltron-like into a massive super monument, made to look like Hitler giving a Sieg Heil. The second goal is to create a birthday present for the Fuhrer to be unveiled at his upcoming birthday party. The group splits up again. Jackson leaves to protect Lady Liberty while the others head to the birthday party. They all eventually manage to infiltrate and ruin the birthday party but fail to kill Hitler (who jumps out of a window).

So yeah, I Danced for Hitler! needed to introduce us to the wackiness of Danger 5, and it succeeds on all fronts. The first two scenes – which make up Act 1 of the episode – act as great establishing scenes for the show. They give us a taste of what the show has to offer and while hopefully getting us on the hook for the rest. The first scene, when the Nazis steal the Eiffel Tower, establishes for us a few things. First, it shows us that these aren’t like the horrific Nazis of actual WWII. Instead, they are a goofy force of pure super-villainy ala Specter or Cobra Command.

It also shows us what we should expect for a show that aims for the aesthetics and style of the 60’s stories it emulates. There are the cheap props aka the Nazi blimps with claw machine claws picking up a model of the Eiffel Tower. There’s exaggerated acting aka the Frenchwomen’s reactions to the tower being stolen. Lastly, there are outlandish characters aka the German shepherd puppet that commands them in perfect German on top of everything else.

The second scene is our first look at the members of Danger 5, relaxing in their luxurious safe house. In this scene, we get snapshots of each character. Namely, they are doing something that highlights their personality. For example, we have Tucker playing chess by himself. For another example, Pierre and Ilsa hanging out at the bar telling war stories over cocktails. In the process, we get a strong enough sense in each character’s personality where they already seem distinct and memorable. My favorite was Pierre, what with the recounting of a story followed by improving a drink telepathically. Sure, both of these scenes are brief, but they are pitch-perfect in introducing us to Danger 5 as a whole.

But what about the rest of the episode? Man where to start? Well, after these Act 1 scenes, the episode just keeps topping itself in ridiculousness. On a single joke level, for example, there’s the mechanical German shepherd Jackson uses to infiltrate and later destroy the Nazi base where they were holding the captured women. I mean, “Sexy bitch” mode just gets me every time. For something on a story level, the ultimate reveal of the monument thefts and Hitler’s birthday party is just super funny to me. It just goes to show how this show will always double down on the absurdity when the opportunity arises.

I should also give special mention to the characters themselves. Based on this episode, my favorite characters have quickly become Pierre and Ilsa. With Pierre, it’s because he has all the heart of the episode. He has his romance with Celeste and its tragic end, which has the greatest dramatic weight. I also loved how his plans tend to involve having a fun time. I mean, who else would take down Nazis by tricking them into partying first. With Ilsa, it’s largely because this episode shows that she is as much of a freewheeling badass as she is hilariously petty. Like, the fact she’s jealous Hitler thinks Claire is the hotter of the two Danger 5 women just strikes me as hilarious. That said, every character gets their fair share of humorous hijinks and jokes, and I can easily see them becoming favorites for other viewers.

Lastly, I’d be remiss if I didn’t mention the running gags. Throughout the show, each season is chock full of running gags. That said, the gags of season one are something else. I’m especially fond of Hitler escaping death by Danger 5 supplied rain of bullets by jumping out of the window. This is made even better when they reuse the same stock footage of Hitler jumping out of the same window every time. My favorite one though is the “perfect” cocktail recipes Pierre gets when an ancillary character dies in his arms. In I Danced for Hitler!, we get the perfect Fruit Madrid – which sounds gross – and the perfect Heil Hitler – which sounds interesting. Each gets their start here in I Danced for Hitler!, and just like in every other episode they’re in, they provoke some hearty laughs.

There are only two complaints I have with I Danced for Hitler!. First is that while the episode is hilariously wacky, it’s wacky in a way that feels more familiar with some of the other episodes. Like, stealing the world’s monuments is a pretty stock supervillain trope that’s been used over the years. I mean, it’s the premise behind Despicable Me, and that came out fairly recently. Plus, I remember this plot popping up in childhood cartoons way back in the day. I mean, the episode plays it off well, but compared to other episodes, it feels rather safe.

The other is that Hitler isn’t given much to do. He’s the chief antagonist in general, but it isn’t until season 2 when he reliably starts driving the machinations of the plot as opposed to his underlings every episode. Otherwise, he just is in the background while his underlings drive the schemes and the plot. That’s especially the case in this episode. He doesn’t order the monument theft or directs the birthday party. Instead, he just hangs around being served his every whim. Other than Claire, he doesn’t even interact with any of the members of Danger 5 until the very end. It’s a common issue with the supreme overlord trope in general – look at Lord of the Rings as a prime example of this – and Danger 5 falls into this regularly.

So what did I think of I Danced for Hitler!? Despite some small issues (quibbles I dare say), this was a very effective and entertaining introduction to not just the 60’s inspired WWII setting of season 1, but to Danger 5 as a whole. I mean, there’s a reason this was the first episode of the show, and it is one I regularly visited and plan to revisit in the future.