Cruella (2021) began its theatrical run and landed on Disney+ ($30 for premier access) at the end of May. The film will not be available with the Disney+ subscription until August 27th of this year. Glossing over $30 spent, I sat down to see what Disney had to offer as its next villain focused film. The only other villain movie among the growing amount of live action remakes is Maleficent (2014) and Maleficent 2: Mistress of Evil (2019). Within the Maleficent films, a complete revision of the character and story shifts Maleficent to an anti-hero position. Unlike Maleficent & Sleeping Beauty, Disney already produced a live action 101 Dalmatians (1996) and the sequel of 102 Dalmatians (2000) starring Glenn Close as the eccentric but unhinged Cruella de Vil. Cruella does not rewrite any of the original story yet. We were given an honest prequel which concludes with a possible set up to the original 101 Dalmatians story by its end. This origin exploration let Cruella enjoy becoming a villain.

We are introduced to her as a rebellious child named Estella whose mother befalls a tragic fate due to Estella’s disobedience. As a recent orphan, Estella runs into two other orphan boys- Jasper and Horace- completing the trio. Estella expresses herself through fashion which sports a counterculture aesthetic. Thus, her biggest desire is to create high fashion with the leading designer- The Baroness. From there, we travel with Estella and crew as she evolves into Cruella through secrets revealed and revenges sworn. 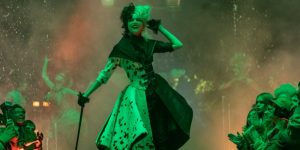 The film had fun with itself as seen in the wardrobe design. It accepted itself as a fashion movie with striking looks that played upon the black and white Dalmatian theme. Although, it is hard to understand why quality lace front wigs are still a difficulty for most Hollywood films. The wardrobe did create a unique look for itself as it did with its character building to Cruella. 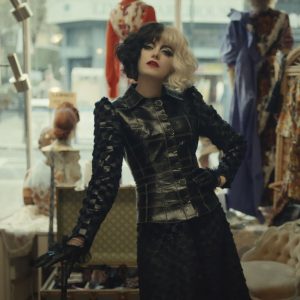 The base story is about an orphan who seeks revenge and loses herself along the way. We do witness Cruella conceding she hurt those who help and love her on her mission of revenge and she is wrong for that. Those hurt would be mainly her found family of Jasper and Horace. It is a dysfunctional family dynamic but elevates Jasper and Horace slightly above henchmen. However, Cruella only admits her wrongs when Jasper and Horace decided to not help her anymore. This highlights what Cruella embraced. It never tried to title Cruella as a hero nor as a good person. Her motivations were revenge seeking and individualistic. As Megamind said “Being bad is the one thing I’m good at… if I was gonna be the bad boy, I was gonna be the baddest [boy] of them all.” I find these two movies comparable in their villains’ perspectives. In Megamind (2010), fashion and presentation were at the forefront of being a respectable (super)villain. Cruella also welcomed being bad while looking fabulous because she was always going to be labelled bad. 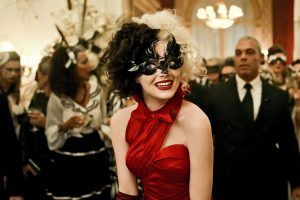 Emma Stone played Cruella quite well. Up against the other Cruellas from the original 1961 animated film and Glenn Close’s portrayals, those characters were fully formed in their villainy by the time we met them. Stone’s approach was more subtle and delicate. Stone understood her character was stuck between trying to be the acceptable Estella and being herself which is Cruella. Joel Fry and Paul Walter Hauser filled the shoes of Jasper and Horace perfectly. They gave solid character building reads on the two henchmen who were essentially blank slates. They were more people than pawns. 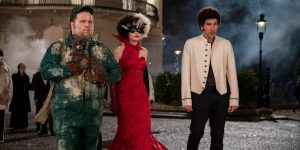 We were given slightly more background on Roger’s (Kayvan Novak) connection to Cruella. Anita (Kirby Howell- Baptiste) and Cruella’s relationship followed the original film more by attaching them as schoolmates. Both Baptiste and Novak gave favorable performances despite their brief screen time. Emma Thompson gave the Baroness the conceited flair needed. All of the cast delivered a performance that made a mediocre screenplay engaging.

Overall, Cruella gave us a fun and entertaining film that is, of course, for the whole family. This was possibly the only direction for Disney to push Cruella’s story in. The alternative to a crime comedy would have been a darker villain drama which would have battled hopelessly against Disney’s family- friendly brand. The anti-hero label has been tossed at Cruella as a sympathy story to the character. 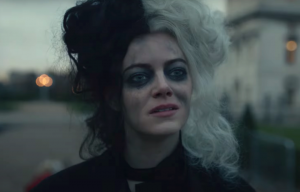 The film was more explanatory than sympathetic. Bad kid tries her hardest to be good but in the end champions being bad. It was always questionable how the original and Glenn Close Cruellas had their wealth and henchmen. This needed explanation also  had to include an entertaining story. With a sequel in the works, I hope a more unbalanced, fur obsessed Cruella is in our future. We caught a glimpse of her in Cruella but it did leave much to be desired.