Watercooler Reviews | Concrete Cowboy – a story about humans and their horses 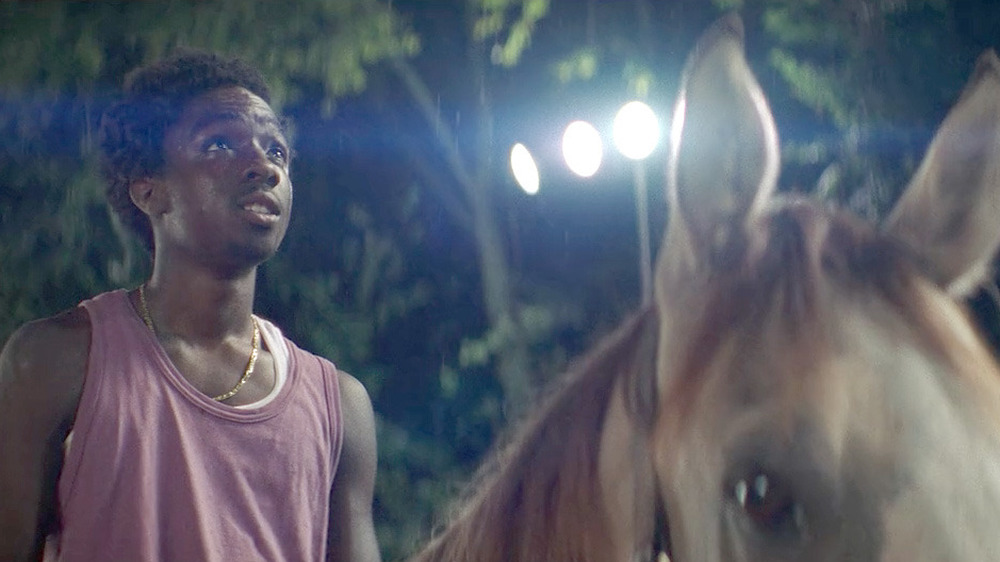 Our main character in Concrete Cowboy is Cole, a 15-year-old boul growing up in Detroit where he keeps getting into trouble at school, so his mother drives him to Philadelphia to live with his estranged father Harp for the summer.  When she drops Cole off in the North Philadelphia neighborhood where Harp lives, Cole discovers that his father oversees a local stable, and there’s also a horse living in Harp’s house.  What Harp doesn’t have is food in the kitchen or anything else needed to raise his troubled teen son.  Over a rocky summer, Harp becomes a better father, while Cole essentially undergoes several weeks of equestrian therapy making use of the stable horses to help promote his emotional growth.

Let me begin by sharing that my feelings about this drama film are split 50-50 but, ultimately, should you watch it?  Yes!

Concrete Cowboy is a darling Netflix film that I and other critics really really really, genuinely respect.  However, this is an instance where it is respect for the filmmakers’ intentions, rather than the result of their production decisions.  This article you’re reading right now is a second write-up; a more honest attempt than my first draft which politely focused on the director’s background, setting, plot progression, and other background info because I was trying to skirt around the unfortunate facts that [1] there wasn’t much narrative heft from Concrete Cowboy and [2] what the film did offer wasn’t pieced together well.  For example, at the stables a rider tells Cole how entire checks are often spent on taking care of his horse. After watching Concrete Cowboy three times, I’m left to guess that Harp’s kitchen doesn’t have food because he cares for the horse in his living room – maybe?  It’s only speculation, since that wasn’t made clear during the movie.

Concrete Cowboy was both co-written and directed by Ricky Staub.  Staub has a personal connection to the community featured in this film, and his production seemed to have been the result of his closeness to the cast.  Choosing to shoot poignant scenes with hand-held cameras was a decision that clearly highlighted how much Staub and his crew were moving in an integrated way with and among characters, staying close to respectfully capture their rawest and most heartrending moments.  Although hand-held shooting produces wobbly images, as you track a subject’s footsteps and other movements, it was also the best way to show that Cole and Smush were running for their lives or to emphasize the utter chaos as Harps’ horses were taken into custody by Philadephia Animal Care and Control.  Hand-held shooting is typically reserved for nonfictional documentaries, as well as docudramas which Cowboy Concrete is.  This coming-of-age drama is set at the stables of the Fletcher Street Urban Riding Club, a historic hub run by Black equestrians where youth are encouraged to positively spend their leisure time outdoors.  I may disagree with Staub’s production decisions, but I applaud his evident devotion to the Fletcher Street Urban Riding Club and its mission to nurture North Philly youth.

However – and here’s the negative 50% – I disagree with the assumption that being a Black horseback rider in Philly means automatic admission into the Western genre of violence and cowboys.   I don’t believe it’s automatic admission, and I hope that doesn’t offend anybody.  Presenting Concrete Cowboy as an urban and modern Western wasn’t done well, so it became a basic filmmaking mistake.  As I know and love Westerns, such categorizing of Concrete Cowboy does not work.  Perhaps I’m stuck in the past, but when I think of Westerns, I envision Dances with Wolves, which I’ve rewatched for the past thirty years.  I also think about Ed Tom played perfectly by Tommy Lee Jones, one of the best sheriffs.  Ed Tom’s opening monologue and the particular sentiment that “I don’t want to push my chips forward and go out and meet something I don’t understand. A man would have to put his soul at hazard. He’d have to say ‘Okay, I’ll be part of this world.’” ‒ uff, that’ll always take my breath away because it resonates so deeply with me and other fans of No Country for Old Man.  Yes, Method Man was stupendous in Concrete Cowboy – superb at exuding the deputy vibe.  But if Staub and Netflix want viewers to believe Concrete Cowboy was a Western, more production work was needed.

It was distracting how this inspirational story about humans and their horses was packaged as a cowboy tale, but while I’m frustrated with behind-the-scenes execution, the cast was terrific.  If you’re a fan of Idris Elba, definitely catch him in Concrete Cowboy.  As mentioned above, Clifford “Method Man” Smith is a quintessential sherrif.  Method Man does his deputy role effortlessly, riffing some of the film’s funnier lines. In this experienced cast, big congrats to Caleb McLaughlin who made his film debut starring as Cole.  As they would say in Philly, young boul is a pro among veterans.  McLaughlin has garnered success from his work on “Stranger Things,” and I would be thrilled to see him in more Netflix productions.