Writer’s Note: I would like to take a moment up top to cite the podcast Junkfood Cinema, its hosts Brian Salisbury and C. Robert Cargill, and their episode on Krull. It helped shape a childhood favorite of mine into a personally esteemed work of pulp art and therefore, influenced the following article.

There’s a famous story tied in with that part in Mel Stuart’s 1971 family classic Willy Wonka & the Chocolate Factory where Wonka (the immortal Gene Wilder) first steps out of the factory. Stiffly, he hobbles over to the awaiting crowd, freezes, and falls forward into a spry somersault. This was suggested (and, by some accounts, demanded) by Wilder so the audience could never tell whether or not they could trust him. And that’s why today we’re talking about Krull!

“Krull? KRULL? You start writing for an actual website and you talk about Krull!?”

Shit yeah I do. Heaven forbid you get comfortable. Peter Yates’ 1983 Star Wars knock off cult classic; Angel to some, demon to others.

“Okay- Jesus Christ, whatever. How are you gonna spin this with your ‘educational’ writing gimmick? Have- Have you always been this way?”

Uhh… Yeah but there’s PLENTY to take away from Krull. Relax, bud, I got this. So yes, after the thundering hit that was George Lucas’ Star Wars in ’77, film studios scrambled to copy its formula. There was an ensuing boom in cheap Space Operas with drastically varying levels of success. Then in 1982 came the release of John Milius’ Conan the Barbarian. It too cleaned up at the box office and suddenly Sword & Sorcery movies became all the rage (also ranging wildly in quality). But only ONE movie dared to combine the two genres: Krull.

An oddity on every level, Krull has two distinct cinematic achievements going for it: 1) It is (in my opinion) the best of the 80’s ripoff crop and 2) It boldly makes up maybe the dumbest word of all time AND deems it acceptable to be its title. Truly, whoever thought a guttural, phonetic nightmare like “Krull” was a bankable name for an aspiring film franchise is a… Blessed maniac because it wouldn’t be the film it is without it.

Set on the planet Krull (THAT’S right, IT’S a planet), the story starts with Prince Colwyn (Ken Marshall) and Princess Lyssa (Lysette Anthony) on their wedding day. They come from different kingdoms and should their nuptials go according to plan, they could fulfill a prophecy that would see them rule Krull and their son go on to rule the galaxy. But wouldn’t you know it, a shape shifting beast (named The Beast) and his army of stormtroo- I MEAN Slayers arrive from space in their teleporting fortress mountain and kidnap Lyssa. Colwyn must now assemble a ragtag crew of mystics, sorcerers, barbarians, and a cyclops to get her back. If that doesn’t sound like a surefire hit, I don’t know what does. Unfortunately it wasn’t, so that 100% Metal as fuck prophecy about the galaxy king never happened. Lesson #1: Pick a better title than Krull.

If there’s one thing I learned from my friends in college it’s “Commit to the Bit”. No matter how stupid a gag, insipid an idea, or convoluted a payoff- If you have a little faith and a lot of conviction, you can’t go wrong as long as you Commit to the Bit. Krull is an infamously dopey movie that is completely saved because it Commits. It understands entirely what it is and strives to deliver. It doesn’t always with predominantly dated special effects and a slow to start pace but when it kicks into high gear, FUCK does it. With a spirited (if not a tad derivative) script by Stanford Sherman, a grandiose score by James Horner, and an eager cast featuring the likes of then up and comers Liam Neeson and Robbie Coltrane; everyone is bringing their all to this film and why not? You’re in a movie named after a heartburn burp. Go nuts!

There are many little concepts in Krull, clever and/or curious little nuggets of fantasy gold with almost no bearing on the plot but that flesh out the world in small but wide reaching ways. There’s a scene where Obi- I MEAN Ynyr (Freddie Jones) visits the lair of the Widow of the Web: An oracle who is condemned to a massive spider’s web after a past wrongdoing. Her life is dictated and protected by the sand in an hourglass. Dictated by the sand remaining contained, protected from the large presiding spider what spun the web she’s imprisoned in. How does any of it work? Never explained but, like with Argento (THROWBACK, see my Deep Red piece), it makes a lyrical kind of sense. Suffused with regret and pain, this one-scene character leaves her own unique stamp on the film with an unnecessary profundity that lends (spoilers) her exit a noble, heartbreaking pathos. And there’s a lot of those extra steps in here. A magician who can do incredible things but rarely when he wants or needs to, like wanting to turn a perceived enemy into a goose and doing so to himself instead; a cyclops whose species long ago traded an eye so as to foretell the future but the only one they see is the moment of their own deaths; a herd of wild horses that run so fast their strides generate flames and, should they stampede off a cliff, will fly; and the fathomless kingdom of The Beast with its abstract, ever shifting internal architecture that takes the form of his eyes and hands as he ethereally tracks Lyssa’s desperate wanderings within. Like I said, not much of this is ever elaborated on but it doesn’t really have to be. It makes immediate, fantastical sense.

This leads us to Krull‘s greatest lesson and strength. As can only be hoped for from a movie with a title that sounds like a punch to a nauseous stomach, it is unwavering in its earnestness. It’s a fun, frequently cheesy romp but it takes itself seriously. There is no winking even if it might have helped audiences at the time digest it better. The makers of Krull believed in Krull. They Committed to the Bit. I’ve been working on a story for a script lately. I won’t bore you with the details but suffice it to say, there are no cyclops or fire mares in it. Anyways, I’ve really been struggling with the third act because I’m constantly waffling on what the genre should be. Krull similarly can never pick a genre. At once high fantasy and silly sci-fi, the movie pulls itself together because it Commits fully.

This was one of my favorite movies growing up. I genuinely love Krull. For its (many) flaws, its gloriously wacky inventiveness and ceaseless fun carry it through. History may remember it as a failure but those who know its inspired charms are better off for it. I don’t know why it exists but I’m forever grateful that it does.

Ah shit, I didn’t mention the Glaive… Uh… Hmm… OH! Here, this is how much I champion this movie. A friend made me this: 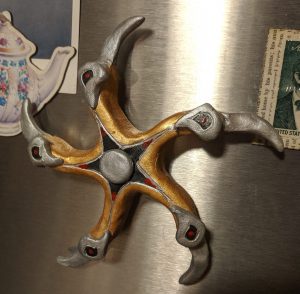