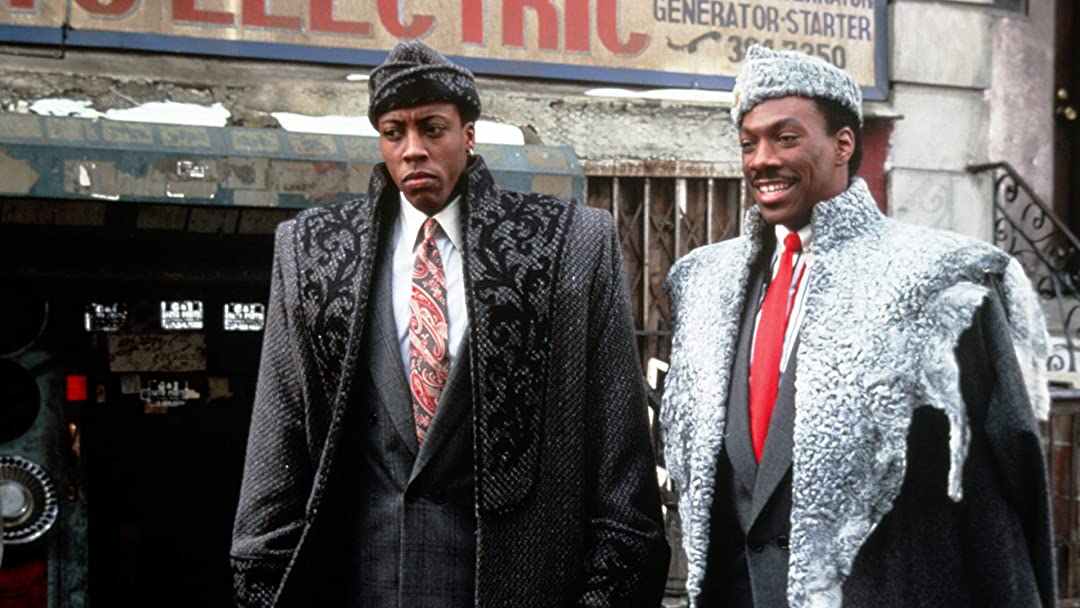 This review is for you – of course – but it is especially for anybody who has listened to Saul’s joke for the past 33 years.  Perhaps you’ve never seen Coming To America, in which case I’m jealous of you.  Seeing it with virgin eyes could rock your world; it’s a joining of the “cultural reference” ranks, similar to the first time one hears a song by Michael Jackson or Aretha.  But if you already know the movie and if you have not been offended by its pre-MeToo-ness, then this review will hopefully resonate with those who’ve loved it for three decades.  Something I won’t extensively rant about, I am an Eddie Murphy fan!  His episode of “Comedians in Cars Getting Coffee” is sweet and personable.  He’s a legend, period.

Anyway, “You listening?  A man goes into a restaurant.  He sits down.  He’s having [soup].  He says to the waiter…”

Coming to America was released in the United States on 29 June 1988.  It is a romantic comedy film that was directed by John Landis and based on a story originally created by Eddie Murphy ‒ who also starred in the lead role as Crown Prince Akeem Joffer. This American movie co-stars Arsenio Hall, Shari Headley, John Amos, and James Earl Jones.

And this may be the most comic we see James Earl Jones, as Akeem’s father King Jaffe Joffer. Jones was amusing in the romance Claudine, a modest hit that showed new dimensions of blaxploitation.  I also like Jones as the government agent in the cult classic Sneakers.  (When he bellows “NOOOO!” Oh gosh, giggle fit ‒ https://youtu.be/74ocbvwam7c).   But hands down, I think that Jones might be at his goofiest as King Jaffe Joffer in the beginning and end of this movie.

At the beginning of the movie, a conversation about getting married shows King Jaffe’s absurd and outdated sense of silly logic.  In a quick breakfast scene with his wife Queen Aoleon and son Prince Akeem, the discussion goes like this:

Queen Aoleon:  When I first met your father, I was terrified. … I was so nervous, I became nauseous. But over the years, I have grown to love your father very much.

King Jaffe Joffer:  So you see, my son, there is a very fine line between love and nausea.

Akeem: I understand, Father, but when I marry I want the woman to love me for who I am, not because of what I am.

This early scene prepares viewers for a movie that will be about the search for love.  Seeking an independent woman who loves him for himself and not his royal status, Crown Prince Akeem and his best friend Semmi travel to the New York City borough of Queens, and they rent a filthy apartment in Long Island City under the guise of poor students.

Searching for a bride, they are invited by locals to a rally that is raising money for the inner city. During the rally, Akeem encounters Lisa McDowell who has all the qualities he desires and, upon his insistence, Akeem and Semmi work at the fast-food restaurant called McDowell’s ‒ a McDonald’s knockoff that is owned by Cleo McDowell, who is Lisa’s father.

I’ve enjoyed Coming to America since the 90s as a teen in Boston, MA. A Ghanaian neighbor and I repeatedly watched her video cassette copy of this classic rom-com, which is a commentary on Black identities. We were Brown kids from two different cultures ‒ one West African and the other a New Englander ‒ laughing because Eddie can make anybody laugh just by being his comedic genius self. (Well, not Bill Cosby.) Now I understand more of the messages under the hilarity, but to be honest, I mostly get the messages about life in NYC because I don’t know much about the diverse continent of Africa, which was a controversy back in the 1980s when a lot of African-Americans (who didn’t go by Black Americans, a new millennial identity) were reconnecting with their African roots.  Over these past three decades, attention has settled on the NYC setting in Coming to America.

Some of the funniest moments in this movie are about Soul Glo. These are the movie’s bits of observational comedy that are commentary on the expression of American beauty through hairstyles as a signature of Black culture.  One amusing ramble is delivered by Clarence the barber who says “I wish more of the kids today [wore] their hair [natural] like Dr. Martin Luther King.  You ain’t never seen Dr. King with no messy Jheri Curl.  Dr. King ain’t come walking around like that.” (@ 00:50)  Then there is the Soul Glo commercial, which became a cultural symbol for Jheri Curls ‒ representing style confidence.  The Soul Glo song was composed by the guitarist and songwriter Nile Rodgers.  After producing for everyone from Diana Ross, David Bowie and Madonna, Ridges named the Soul Glo song as his greatest composition out of a 50 year career still going strong.  So if you don’t know, now you know:  Soul Glo is something.  Black hair is something, and as a loyal fan I expect the updated commercial in Coming 2 America to continue the Soul Glo legacy and joy for 33 more years.

My last few reviews have been a wee earnest, so I am tempted to end this one with a cheerleading recommendation for you to rewatch this classic because it’s great! And it is, really great with many memorable lines.  But because I dig into films like they’re rummage stores, I think you should visit or revisit Coming to America because it is a significant slice of cinema with a behind-the-scenes production that was as messy as a soap opera.  (Director John Landis claimed Eddie Murphy was “the pig of the world — the most unpleasant, arrogant, bullshit entourage, just an asshole.”)  Or, you can watch it as a fun way to celebrate Black History Month before moving onto Women’s History Month.  This is a film that is diversely comedic, employing everything from the absurdity of King Jaffe to Eddie pulling off whiteface minstrelsy, ultimately presenting a buffet of comedy genres successfully mixed up together over 117 minutes of a Prince Charming tale that is hysterical.

(Arsenio Hall plays his roles to a tee, his preacher funny and close to the real thing. He’s the perfect sidekick for Eddie.)

Tune into Prime Video and choose this confident film.  Because yes, there’s a confidence to everything about Coming to America, including and beyond Soul Glo Jheri Curls. Coming to America is like Dave Chappelle: Even when some jokes become sexist, there’s a buoyancy that keeps many of us hollering.  As Dave Chappelle touted, “I’m like Evel Knievel, I get paid for the attempt! I didn’t promise this shit would be good” ‒ or politically correct. Eddie got paid a mere $8 million for Coming to America, equivalent to $16 million now. Eddie exudes winning confidence in his role, and back in 1988, Eddie definitely won over lots of folks who love Coming to America. Thirty-three years later, Coming to America fans are looking forward to March 5th when the sequel Coming 2 America premieres on Prime.