Brian De Palma’s Carrie (1976) stands as quite possibly his most well-known and best received film from an outstanding, if underrated career. However, he returned to similar subject matter just a couple years later, hoping to attract a larger audience, as he felt Carrie had not lived up to its box office potential.

This time, the film would feature two telekinetic teenagers, one of which was a returning cast member from Carrie, Amy Irving. Along for the explosive ride were the late, great Kirk Douglas, renowned independent filmmaker John Cassavetes, and up-and-coming teen actor Andrew Stevens, who would be nominated for a Golden Globe a year later for The Boys in Company C (1979). Not to mention Daryl Hannah in a small role, along with a blink-and-you’ll miss it appearance from Chicago’s own Jim Belushi, in his first film appearance, albeit uncredited.

In addition to branching out from his usual cast of actors, De Palma shot the film largely on location in and around Chicago in the summer of 1977, save for an opening sequence in Israel. In the introduction scene for Irving’s character, she and a friend walk along the crowded North Avenue Beach, the skyline ever-present behind them.

The film follows Kirk Douglas as Peter Sandza, who’s son Robin (Stevens) is kidnapped by former associate Ben Childress (Cassavetes) in Israel, in hopes they can weaponize Robin’s telekinetic powers for the benefit of the United States government. Childress takes Robin back to Chicago, where his employer’s company, PSI, is located, with Peter in close pursuit. 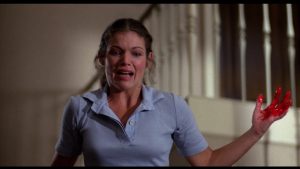 Meanwhile, Gillian (Irving) discovers telekinetic powers of her own, and as she harms people around her while realizing the full scope of her abilities, she checks into the Paragon Institute, hoping they can help teach her how to keep the outbursts in check. Gillian instead becomes more powerful, and forms a psychic bond with Robin, who had also spent time at the institute. Peter and Gillian inevitably cross paths, and work together to save Robin from Childress. The  literally explosive finale, shot in Lake Forest, needs to be seen to be believed.

It’s a treat as a time capsule of a Chicago that doesn’t look all that different in many locations, save for the cars and decor of the time. A thrilling sequence takes place at the Old Chicago Amusement Park (formerly located at 555 S. Bolingbrook Drive, Bolingbrook, IL), touted as the first indoor amusement park in the world. The park was only open for five years, as gargantuan construction costs and frequent safety concerns never gave people much reason to come back, along with competition from what is now Six Flags Great America, which opened during the park’s short life-span. However, it proceeded still-standing indoor institutions such as the Mall of America.

The list of familiar locations is endless, with a sequence taking place in the Water Tower Place Shopping Center elevators, an escape from the former Plymouth Hotel, a relaxed scene in Lincoln Park, and even a car chase through Lower Wacker, onto (and over) Navy Pier. Despite the obvious changes that these locations have gone through, the city is captured beautifully, with the crew using the landscape to their advantage for entertaining chases, no matter how believable or not it is to see then-60 year-old Kirk Douglas scale the ‘L’ platform and swing into an unsuspecting apartment. 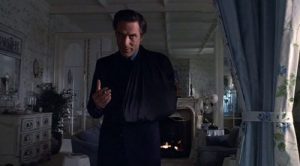 As with most De Palma films, the craftsmanship is undebatable, even if the plot and characters hint toward more of a B-movie. His longtime editor Paul Hirsch (Star Wars, Carrie, Blow Out, Ferris Bueller’s Day Off, and countless other classics), gives the film a tense, fast-paced adventure with plenty of editorial flourishes to make it stand apart from other thrillers of the time. The score by the legendary John Williams echoes Bernard Herrmann’s scores from Hitchcock’s classics, an oft-quoted influence for De Palma.

De Palma’s entire career has belonged to elevating material that could simply be seen as low-budget camp, his Blow Out (1981), stands out as maybe the most effective, although Carrie, Hi, Mom! (1970), Sisters (1972), Phantom of the Paradise (1974), Obsession (1976), are all well worth your time. His other blockbusters such as Scarface (1983) and Mission: Impossible (1996) are pure entertainment at its best, along with his return to Chicago in The Untouchables (1987).

De Palma unfortunately never seemed to reach the same level acclaim as his “movie brats” comrades, filmmakers who included Steven Spielberg, Martin Scorcese, George Lucas, and Francis Ford Coppola. This can likely be attributed to De Palma’s fearlessness in including gore and portraying sexual desire on-screen, both of which often caused critics and audiences to overlook his early work, no matter the craft behind it, in addition to his strong and steadfast opinions he has never been afraid to make public. De Palma deserves much more respect than he has received, as it’s hard to think of filmmakers who match the pure thrills his films have delivered. He has struggled to find distribution and financing in recent years, his last film even being taken away from him. While he has currently turned his attention to writing novels with his wife, I for one hope we get to see at least one more pure De Palma film, if not many more.

The Fury is available for rental and purchase through Amazon, Google, and Vudu. 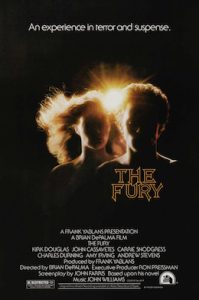