“History doesn’t repeat itself, but it often rhymes”

This quote, usually attributed to Mark Twain, has existed throughout time, giving us a way to process how we continually fall into similar traps as a society, often led by people who have no grasp of the history they are helplessly stuck reliving. It doesn’t repeat because the situations and elements leading to any particular moment will never be exactly the same, but we can see shades of past events influencing how we lead our lives today. This also perfectly encapsulates Haskell Wexler’s near-forgotten 1969 masterpiece, Medium Cool, in how it captures a divisive moment in the political history of our country, not dissimilar to how we find our political landscape today.

The film, which quietly celebrated it’s 50th anniversary just last year, tells the story of John Casselis (Robert Forster, Jackie Brown, Mulholland Drive), a news cameraman in Chicago who gets caught in the midst of the infamous 1968 Democratic National Convention. As we approach yet another Presidential election, I thought it would be interesting to look back and see what’s the same, what’s changed, and what rhymes.

Wexler is most known for being an Academy-Award winning cinematographer, most well known for Who’s Afraid of Virginia Woolf (1966) and One Flew Over the Cuckoo’s Nest (1975). Medium Cool is one of a handful of narrative features he directed over his illustrious career, and it remains his most well-known, although that is not saying much. The film is notable for its mixture of loose narrative and cinéma vérité style, one of the first of its kind.

The film begins with a scene on the highway, where Casselis and his sound man Gus (Peter Bonerz, Catch-22, The Bob Newhart Show) are the first to arrive at the scene of an auto accident. The two gather footage, failing to help the victim in any way. They send their footage off, and in an opening credit sequence that takes place on the back of the messenger’s motorcycle, we see The Loop much differently from how it appears now, even going down a now bare-looking Michigan Avenue. The film was released right at the start of the “New Hollywood” movement, two years after Mike Nichols The Graduate (1967) and just two months after Dennis Hopper’s Easy Rider (1969). Similar to moviegoing audiences at the time, the newscasters and reporters of the film discuss how people’s sensibilities have changed when it comes to media, with one remarking, “Nobody wants to take the time, they’d rather see thirty seconds of someone getting their skull cracked, turn of the TV set say ‘wasn’t that bad, let me get another beer.’” 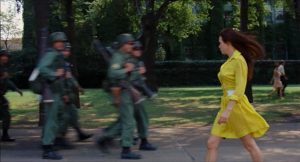 As the news cycle transformed into a 24-hour marathon, intended to be available, ready and attention-grabbing every day, all day, this sentiment just gained more power. We want the sound bites and talking points to make our arguments, not giving the time to really hear a story from every side. Who has the time anymore?

While the film runs through a conventional narrative love story, featuring Casselis falling for an Appalachian transplant, Eileen (Verna Bloom, Animal House, After Hours) now living in Uptown with her young son, it is setting up for the climax, the sequence the film is easily most recognized and best loved for. The crew actually filmed in Grant Park as the riots broke out, staging a sequence in which Eileen desperately searches for her son, Harold (Harold Blankenship), eventually finding Casselis in the mess, as he falls into a job photographing the convention.

It is undeniably live-wire, with an audio clip audible of a crew member saying, “Look out Haskell, it’s real!” amidst the mess. It would be far too simple to say the riots started and ended with the convention in Chicago, years of frustration in Vietnam and taking place in the same year as the assassination of Dr. Martin Luther King Jr. and Robert F. Kennedy months earlier, the latter of which is featured in a brief but powerful sequence in the Ambassador Hotel kitchen.

The National Mobilization Committee to End the War in Vietnam and the Youth International Party had planned a festival to run simultaneous to the Convention. It seemed to be the boiling point after years of corruption, as people had really begun to believe that the government was not interested in what was best for the American people. Former mayor Richard J. Daley was prepared for the protests, assigning around 23,000 Chicago Police Department and National Guardsmen after reported threats of protest and assassination attempts.

Which brings us to today. As we face an, at-best, questionable resource of truth coming from our current political leadership, how are we supposed to feel? What is so fascinating now is that while some people see the lies and the misleading statements, just as many people see the truth they want, so why bother questioning it? As we exist in a social landscape where anyone can hear what they want to hear, where does the truth belong?

I believe it is in this idea that the staying power of Medium Cool holds the most resonance. Through the lens of a “narrative” production, we are put in the middle of a real, dangerous situation that had an effect on the rest of our history. At the same time, however, this is coming from the perspective of a filmmaker with his own set of opinions and morals, one that is made clear throughout the rest of the film. The film would definitely be different had it come from the perspective of a National Guardsmen, or a politician, desperately trying to gain power through this mess.

This is where the beauty and danger of film itself lies. Even in something that represents the truth, it is far from the truth for everyone, and it must be taken with a grain of salt. The artistry on display is undeniable, but who is the film really for? There’s nothing “cool” about the questions the film raises, which means you have to watch it and decide for yourself.

Medium Cool is available for purchase on Blu-Ray and DVD through the Criterion Collection. 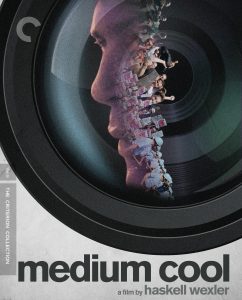