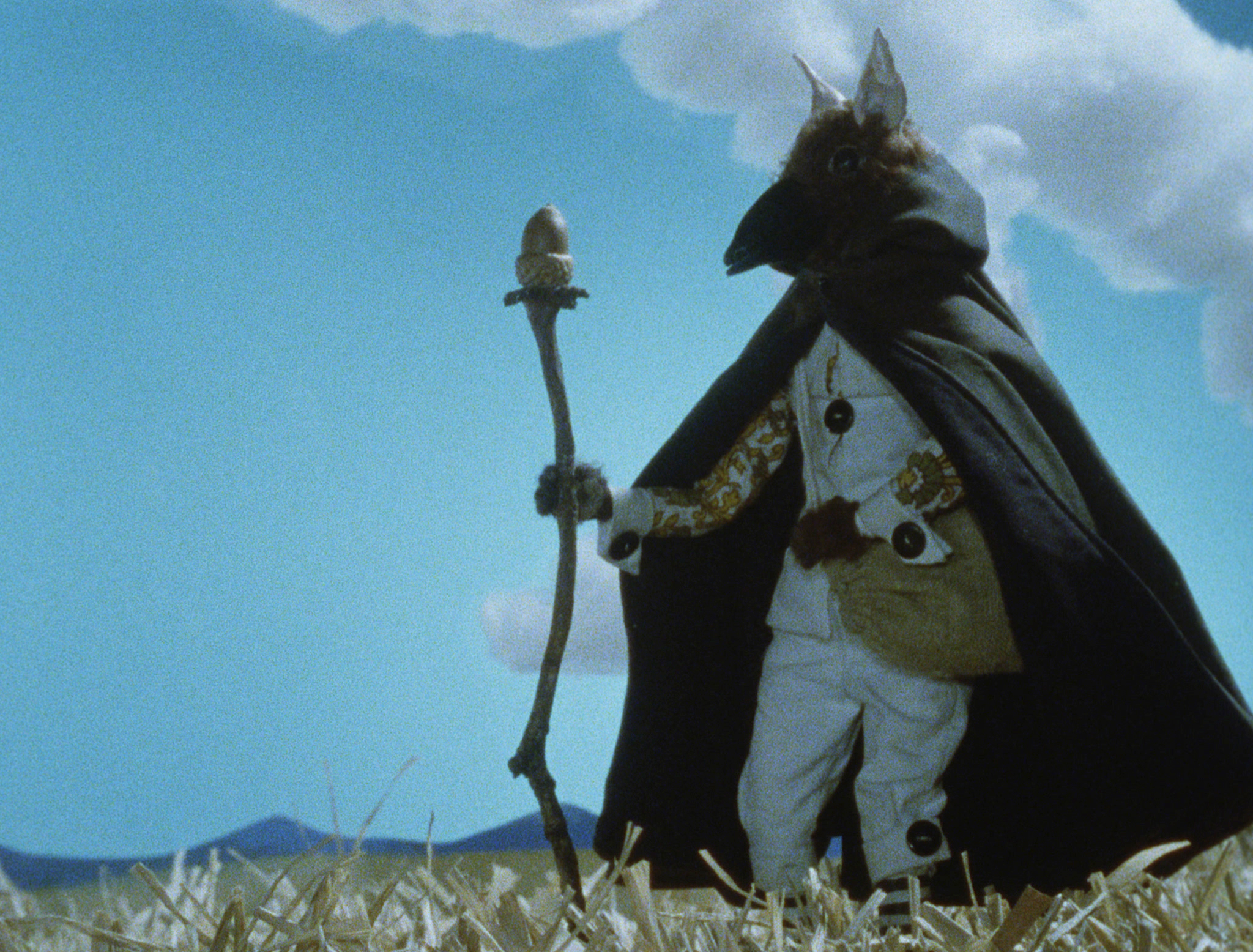 Christiane Cegavske’s first feature Blood Tea and Red String may not be a movie that’s explicitly about Christmas, or even implicitly about Christmas. But the red, white, and green color palette and the stop motion animation make it feel like a not so distant relative of the Rankin/Bass Christmas specials, and the fact that some of the main characters are mice dressed in red and white places it firmly in the same lineage as The Nutcracker and the villainous Mouse King. So while there’s nothing explicitly thematically tying the movie to Christmas, the aesthetics of it feel undeniably indebted to the last hundred years of Christmas entertainment.

The film has no dialogue as all the characters are human/animal hybrid creatures of varying sorts who make sounds more like their animal than human parts. These creatures seem to be able to communicate with each other, but we as viewers never get any translations or explanatory title cards, so the story is conveyed entirely through the visual language.

A feature length film with no dialogue or title cards, even one that only clocks in around 70 minutes, is always at the risk of scaring away or boring viewers. But the main story here is quite simple, and the movie does a fantastic job of maintaining forward momentum, to say nothing of the gorgeous stop motion animation that makes you want to keep watching just for the visuals.

The story begins with a group of four humanoid creatures who seem to have bat ears and crow beaks, referred to as “the Oak Dwellers.” They live an idyllic life, fishing and playing simple games together.

These Oak Dwellers seem to be craftspeople, as we see the aforementioned group of mice come to their Oak and commission them to make a doll. The Oak Dwellers create a doll that looks more human than anything else in the film, but in the process of creation, they fall in love with it. When the mice return for their commissioned work, the Oak Dwellers pay back the coins the mice had paid them so that they can keep their beautiful doll.

The mice leave, but return in the night and steal the doll to bring it to their home. The next morning the Oak Dwellers are pained to discover their loss and three of them set off on a journey to retrieve the doll. From here, the film shows the mice playing cards, playing and dancing to music, and drinking the titular “blood tea” with the doll attached as a body double to one of the mice, while the Oak Dwellers encounter obstacles during their travels.

On their way to retrieve the doll, the Oak Dwellers encounter hallucinogenic fruit, carnivorous plants, a frog shaman with a bag of anatomically correct hearts, and a giant spider with a human head. All of these encounters feel like small twists on standard fairy tale archetypes within the larger basic narrative of a fantastic parable.

It’s these encounters, along with the blood tea and the raven with a human skull for a head that seems to be the mice’s pet, that make the film something not quite for young children. The movie never becomes outright frightening and contains minimal violence, but the world is constantly unnerving in the way that it feels like something you’d have heard about, read about, or seen as a child that is then pushed just slightly off.

The story takes some twists and turns, and the world is never easy to understand. In fact part of the unnerving power of the movie is that any time you feel like you have a firm grasp on the world, something new is introduced to make you question that. But it never becomes overly complicated or involves more than 10 characters, including the members of the Oak Dweller and mice groups. At the most basic level it seems to be a somewhat cautionary tale about destroying what you love by wanting it only for yourself as the doll at the center causes strife and pain for members of both main groups. So while the movie may not be about peace on earth and goodwill to all, it does at least have a message against individual greed that could be read as Christmassy.

But what really makes it feel like a perfect way to add a note of dissonance into your Christmas viewing is the art. Because the aesthetic feels so in line with those Rankin/Bass stop motion specials and The Nutcracker, it feels timeless and like an alternate universe Christmas classic that any fan of stop motion animation and adult fairy tales will love.