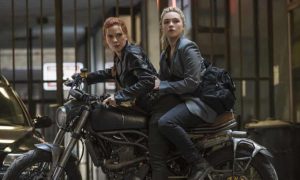 We’ve been anxiously awaiting a Black Widow-centric film for ages, and I think most rational Marvel fans agree that one is long overdue. Regardless of varying degrees of support for Scarlett Johansson and her other recent work, it’s rather unforgivable that one of the most central superheroes in the MCU had to allow her male counterparts three films apiece, not to mention die herself in the most current timeline, before a full-length script was dedicated to her story and character development. Of course, Natasha Romanoff’s tragic death in Avengers: Infinity War lends an element of sorrowful nostalgia to Black Widow; we knew how and when her story would end, and it isn’t here or now. But the heavily emotional relationships portrayed here between Natasha and her families, one at arm’s length and one closer than expected, provoke a sharp pang in the heart. Her love, especially for her sister, Yelena, is evident, and knowing we are now robbed of seeing that develop further is a crushing disappointment.

The film kicks off on a heavier note compared to most others from Marvel with one of the most impressive opening sequences I’ve ever seen. In the cold open, Natasha and Yelena apparently had a relatively normal early childhood, or so they thought, growing up with loving parents in suburban Ohio. Until it is revealed that those loving parents, Alexei (a.k.a. the “Red Guardian,” a super-soldier and essentially the Russian version of Captain America) and Melina, are actually Russian spies. They spend their days stealing information from SHIELD and caring for the girls until they are to be inducted into the Red Room, where they will be trained as “killing machines” alongside a larger group of young women stolen away from their families and lives – the new “widows.” Evidently, there are a lot more black widows than we thought. Still only one that made it all the way to Avenger status, though Yelena could probably give it a genuine shot. Alexei and Melina, upon completion of their assignment, reunite with their boss, Dreykov, in Cuba. It’s interesting for the film’s Big Bad to be introduced in a flashback this way, but given the knowledge that the lead character is already dead in the present timeline, it’s a nice complement.

Incredibly emotional and well handled, the opening credits depict the cast and crew names between flashes of horrific sequences in which the young widows try to escape their Red Room fate, terrified, screaming and fighting to stay together amidst their captors’ abuse. The undertone of this is not something that needs to be explained to anyone identifying as a woman, and is not easily explained to anyone else, except to say that it should come across to all as a powerfully condemning show of solidarity for those across the world who still and always have to fight or flee for the right of choice and free will.

And suddenly, we’re with Natasha in the “present” day – I was so caught up in the grip the opening credits had on my heart, I had nearly forgotten that the entire film had to have taken place in the past, given the events of Infinity War. The adult Black Widow here is on the run, as is Captain America, after the events of Captain America: Civil War, and their role in opposing the Sokovia Accords. (Side note: this takes place 21 years after the opening scenes, which means Natasha is probably around 29 or 30 years old. Geez. Talk about showing the rest of us up. She’s out here making Cap and Bucky look like slackers.) With some help from Rick Mason, who is apparently the closest thing Natasha has to a friend outside of her Avenger circle, she takes up residence in an off-the-grid trailed and commences eating snacks and watching Netflix. Relatable. 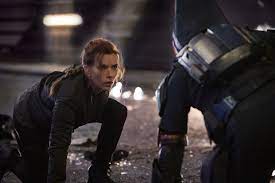 Because this is a Marvel film, it’s not long before Natasha is attacked by Taskmaster, who I genuinely believed to be a version of RoboCop for the first few scenes. Impenetrable and unforgiving, Taskmaster comes after her with such gusto, we know there’s no way the assassination attempt is related to the Sokovia Accords – it would be far too obvious a move. Yelena, meanwhile, hasn’t yet achieved the freedom of will and mind that Natasha enjoys – until she kills another of her Black Widow sisters and accidentally releases an element that wakes her from the mind controlling drug keeping all the widows under Dreykov’s control. Hoping her sister, Captain America & co. will send their help once they realize the situation, Yelena sends Natasha a few more doses of the freeing substance, prompting Taskmaster’s attack. Sigh. Communication skills should not be on either widow’s resume.

Natasha bites the bullet and seeks out Yelena, and though they predictably don’t trust each other at their first adulthood meeting, their interactions are far and away the best part of the film. Johansson and Florence Pugh (Yelena) have instant chemistry, fluctuating between the sisterhood stages of bickering besties and ride-or-die companions. We find out that Natasha is responsible for the death of Dreykov’s daughter Antonia, who she describes as “collateral damage” in her attempt to kill him. Smothering her guilt surrounding Daughter Dreykov upon learning of her failure to destroy him and his Red Room, Natasha and Yelena reluctantly break their surrogate father out of prison in the hopes that he’ll know where to find his former BFF. The best shot of the movie occurs during this prison break, as Natasha swoops down from a helicopter, piloted by Yelena, to snatch Alexei from the bridge seconds before they are all overtaken by a massive avalanche. I wouldn’t be surprised if at least 30% of the film’s budget went to filming this alone – the production team knew exactly what they were going for, and man, did it work. Yelena’s got a point: that would be a cool way to die. 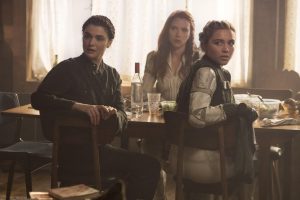 Unfortunately for all three, Dreykov was the one to imprison the Red Guardian in the first place, and Melina has been the brain behind the operation since day one. So, even more reluctantly, the girls are forced to reunite their entire family and confront their abandonment issues.

Admittedly, I cry at most things, and a good Family Issues™️ storyline is no exception. Alexei is nothing like his pre-credits self, and the squad goes through a whirlwind dinner together that starts out pretending everything is normal and quickly devolves into accusation, resentment, and emotional chaos. Again, enormously relatable. There are decades of depth to dig into here, far too much for one screenplay to handle, but the film does a nice job of putting those relationships through rehabilitation as Melina and Alexei ultimately betray Dreykov and side with their daughters. Turns out it was more real to everyone than anyone thought. 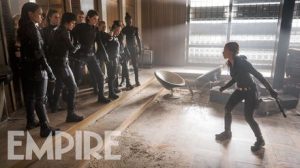 Masquerading as Melina, and vice versa, Natasha infiltrates Dreykov’s office and discovers Taskmaster’s identity: a very scarred and mind-controlled Antonia. Heartbroken and shaken, Natasha goes through the typical superhero setback/breakthrough/setback/breakthrough (my favorite breakthrough being when she breaks her own nose to splinter Dreykov’s aroma-based protective shell) until she and Yelena find themselves emotionally freeing all the widows in their immediate vicinity from mind-control.

And then, because of course it does, the headquarters/plane blows up, leaving Group A (Alexei & Melina), Group B (the widows) and Group C (Natasha, Yelena & Antonia) to get the heck back down to earth. Three notable moments here:

The first was quite touching as it underscores the love between two sisters who are not related by blood, and that’s a pretty rad thing for Marvel to call out as there is absolutely still a stigma in society regarding adopted children and adopted siblings. Similarly, the second proves the same point, recognizing the mistakes made by all parties and re-emphasizing the devotion that ties each relationship together in spite of them. Natasha and Antonia, though, is not simply a show of guilt on Natasha’s part – Antonia’s awakening and immediate question, “is he gone?” is a powerful demonstration of an understanding between women who have been abused by men in positions of power for far too long. All three of the moments hit hard, and are underscored with an emotion it’s hard to get quite right with words.

So engrossed was I with the film by this point, I actually forgot that we’ve already lost Natasha – until the post-credits scene. After watching an optimistic Natasha walk off to reunite her “second family” after the events of Civil War, we’re treated to a stark reminder of her devastating death – Yelena, crying, at her sister’s grave. Who better to lighten the load here than Valentina, who we last saw dragging John Walker out of the depths of humiliation in The Falcon and the Winter Solider. I adore Julia Louis-Dreyfus more than most other actresses in Hollywood, but she really had to send Yelena after Hawkeye, huh? I mean, she’s not entirely wrong, but still.

I was left, at the end of it all, in the hopes that Yelena would become the MCU’s new Black Widow, but if her first assignment is to go after “the man responsible” for Natasha’s demise…