I remember first seeing the poster for this film at Cinema Village when I was in high school, I had gone to see Putty Hill by Matt Porterfield, a movie I probably wouldn’t have the attention span for today, but back then I liked slower cinematic experiences. Maybe because my life was so chaotic feeling at the time? There was a part of me that really used movies as a way to get lost in a completely different world from the one I was in. It’s already a viscerally enticing poster, with a woman in a bikini holding a gun, red tinted night vision look, with a big warning sign on the front. I’m not quite sure what the French were on during this time period, really testing the limits of violence and depictions of brutal sadism on the screen. Martyrs, Gaspar Noe, High Tension, the list goes on.

This film perhaps doesn’t get enough credit for being a film in this genre directed by a pair of underrated female directors. This film came out 21 years ago and when it did it was banned around the world. What kind of film would need to be made now to have a similar response? And would that be a good thing in terms of marketing or a bad thing? Back then it was more of a good thing. What about now? I am a sucker for stylized low budget lo-fi movie experiments. And this film certainly falls into that category. The New York Post claimed this film “Looked Like Hell” and their not not wrong but how can you see that as a negative having grown up in the early 90s. There are a couple things to appreciate about Baise Moi but like with most of the films in this genre, I see these films as being a bit immature in their extremism. 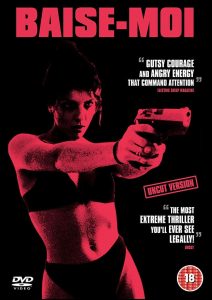 Unlike Michael Haneke or Kathryn Bigelow who use violence effectively, swiftly, artfully, these “New French Extremity” movies leave a lasting impression geared towards mockery and nihilistic uselessness. After a while it’s like…grow up. We like our movies to have deeper meanings. These are the kinds of films you enjoy when you’re at a bit more of an angsty period of your life perhaps. Artistic expressions can be highly potent as reflections for various stages of burgeoning growth. I think filmmakers are starting to realize that it might be more interesting to push an extremism in style instead of in subject matter. A manic overstimulation of content is the future of consuming media as a species. This reminds me of the scene from “The Rules Of Attraction” when the guy goes on the trip all around Europe. I would like to see a feature film length piece with this energy, something that moves at this pace with this much content for 90 minutes. Spring Breakers and Ryan Trecartin and this scene are just teases for what is yet to come and how fast we will all be processing information and entertainment in the future. Zoom zoom zoom at light speed the particles that tap dance on our eyeballs.

Here is the scene from “The Rules Of Attraction”