B Roll: Capitalizing On A Meme 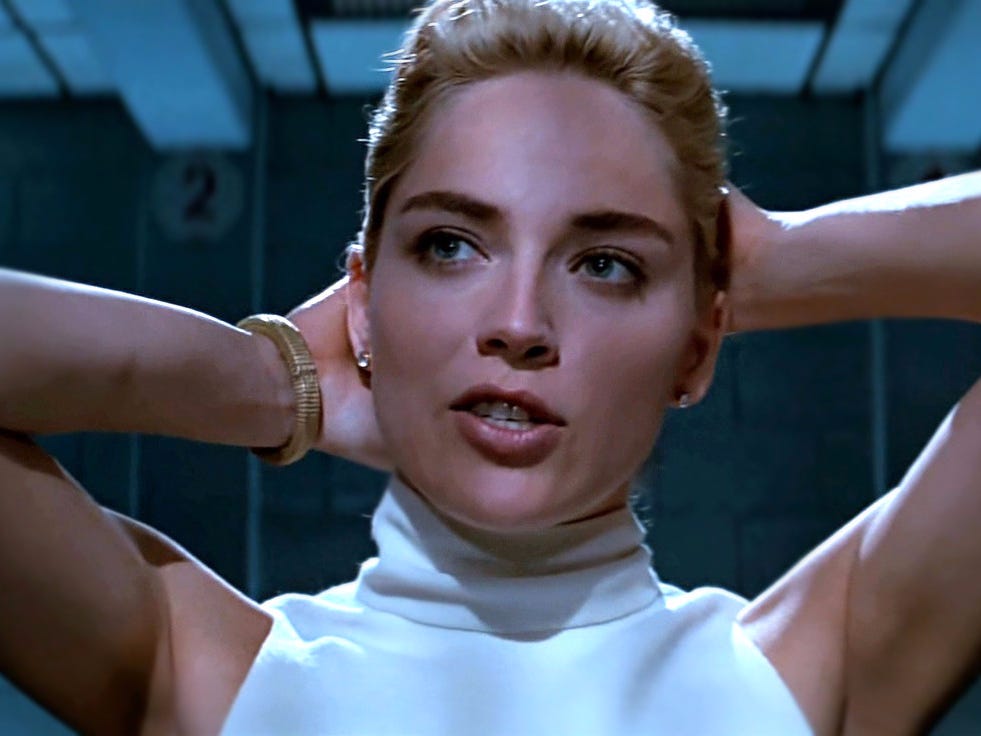 I watched the movie Basic Instinct last night and had the strangest dream afterwards. I was in a dimly lit room and Sharon Stone was standing across from me. The walls of the room kept moving, as if they were breathing in and out. Sharon lights a cigarette and takes a couple drags. She picks up a long concrete beam and suddenly throws it in my direction. I watch as everything happens in slow motion. The concrete beam hits the wall and shatters into a million little pieces. I wake up…with a hankering for greek olives and chocolate milk. Luckily I had both in my fridge.

Let’s talk about the way Basic Instinct used a meme to cement it’s place in pop culture. “Did you see the crotch shot?” Yes. But I also saw a fantastic movie that subverts expectations and deconstructs the noir genre. It’s funny how Basic Instinct became so publicized for this one scene when the rest of the movie is also memorable. But I can see why. It was 1992. This was a time when you couldn’t just watch porn on every single device around you including your fridge. Before we had filmmakers like Lars Von Trier making Nymphomaniac and Gaspar Noe making Love. When this movie was released, the methods of distribution were limited to VHS tapes, so the meme of Sharon Stone uncrossing her legs to the world really helped the word of mouth. And this still permeates today. If anything it’s even more common now.

Movies nowadays strive to hit multiple meme-like digital “word of mouth” moments so as to continue living in social media and beyond. This is how a movie hits big nowadays, especially upon its release. By bringing with it multiple narratives into the public circle of discourse. Just look at the most recent Borat sequel and the money being donated now to the babysitter, or the political controversy with Giuliani. This kind of thing only helps the awareness of the film, which means that more people watch it. You can also look at Uncut Gems and the multiple memes and narratives that came out of that movies release. I think more filmmakers are realizing that if your vision can meme itself into culture you can hit a bigger impact. A24 gets it. Soon more movie producers will too.

I think Paul Verhoeven belongs on every single “underrated filmmaker” list that may or may not exist. I love the way he provides satire and social commentary within genre films. His films always break down the genre, critiques it in some way, or uses the genre to cleverly place criticism upon an industry. This movie works because the script is very tightly constructed. I like that Basic Instinct is like a hardcore Hitchcock film. All of the characters and especially Catherine Tramell, are oozing with sexuality and moral ambivalence, even the murder weapon is phallic, an ice pick. Jeanne Tripplehorne is really cute in this movie, the way her character keeps taking off her glasses. The screenplay takes you for a ride. There is twist upon twist and it does a good job of making you second guess who the killer is constantly. I like that this film has bisexuality in a mainstream production. To quote Camille Paglia on this movie “One of the great performances by a woman in screen history, a great vamp figure, like Mona Lisa herself, like a pagan goddess.”