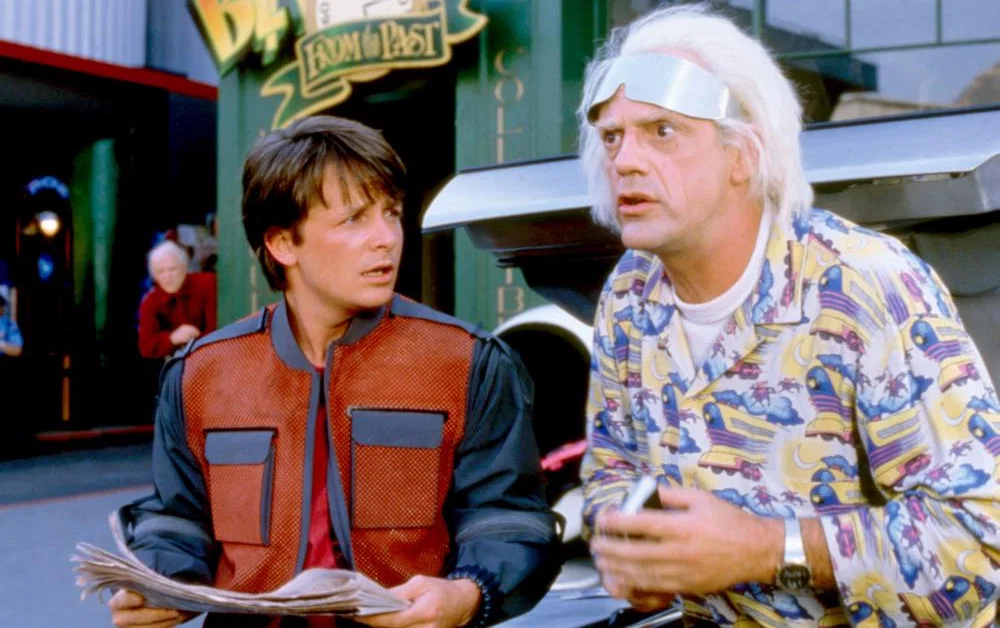 I want to skip writing about the first Back To The Future movie and pretend the third one doesn’t exist and write all about this one. This is the greatest Back To The Future movie in my eyes. Why? Because it actually takes place in the future and It jumps right into the action. Now that the characters and their dynamics have all been established…we can get right into it. I remember watching this film when I was younger and wishing that I had written it. Or something? A bunch of thoughts on this one. I liked the Back To The Future ride at Universal Studios (talk about simulation) but I like the Simpsons ride that replaced it better. I’ve seen vintage shirts from the Back To The Future ride and they look sick I would definitely get one if I was at a vintage shop and they had one.

When I was younger I fantasized that I had written a slew of dystopian science fiction based films such as The Matrix or The Terminator and in my fantasy I also played the lead character. I think it was another form of escapism. I distinctly remember spacing out in class and drawing these fake movie posters in 4th grade. I used to day dream a lot when I was younger. Now I try my best every day to turn day dreams into realities. The whole reoccurring gag/plot point/theme in this film of not being called a chicken is both hilarious and relatable. But I don’t know how I feel about this piece so far. I am making this piece self aware. I would give it a solid 4/10 at best. It doesn’t really go into Back To The Future that much and is sort of composed of these fragmented banana peels scattered across a hard wood floor.

Back To The Future Part 2 hops through different timelines frequently which I appreciate. Rick and Morty is literally Back To The Future with Doc Brown and Marty McFly. Very similar character archetypes only Rick and Morty took it into a different direction, it’s good art because it strikes a chord of familiarity and then presents it in a different context. I haven’t seen the latest season. I think about the Rick and Morty vapes and herb baggies you see at the smoke shop and I wonder how they get away with that. Disney should help Adult Swim out with this one. Licensing chaos. I think the actor who plays Biff and the actor who plays the antagonist coach from the Karate Kid look alike in my mind, I get the two confused, they might as well be the same person. I haven’t shaved in a while, I haven’t worn contact lenses in a while, the summer has been weird so far. The weather has been not very summer-like and I’m eating too much bread…or something? I take back what I said earlier I think this Back To The Future piece might be my magnum opioid. My opal opus. And I haven’t even fully gotten into the movie.

There is a scene in Back To The Future part 2 with a hoverboard that is iconic. I wish that there were more scenes during this enclave of the film but this one moves fast and I also appreciate that. They even take us back to the timeline of the original film and have the main character sneaking around as events transpire that which we have already seen transpire in the original only this time it feels like a remix. Which is good for the current era. That’s what I’m talking about. This film is the one that holds up the most out of all three. I am reminded of the Curb Your Enthusiasm episode with Michael J. Fox and it’s brilliant. This film makes me wish that I grew up in California during the 80s and that I went to some small movie theatre in some small town and went to see this movie.