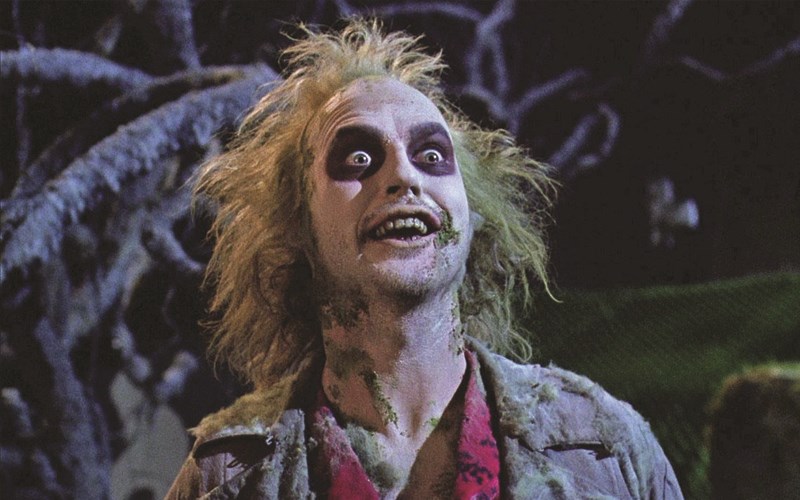 This is my favorite Tim Burton movie. Tim Burton is an interesting director because he’s “sold out” multiple times in his career yet has maintained an element of artistic integrity that remains unchallenged. Tim Burton is an all sense of the word a visionary. Beetlejuice is iconic in its set design, characters, and classic ghoulish charm. The cast is an ensemble. Michael Keaton is pretty unrecognizable in this film showing us how strong the Beetlejuice character is. I remember one time I was in a McDonalds on Halloween and a man dressed up as Beetlejuice came in and demanded that the woman behind the counter give him a taco. She kept repeating “Sir this is McDonalds we don’t serve tacos here.” But the Beetlejuice man was persistent and kept demanding that she serve him a taco. “Please Miss Bubble oh my Big Bubbley Bubble I am the Beetlejuice Man and I need my taco!” he screamed with the fury of 1000 Beetlejuice impersonators and slammed his crusty Beetlejuice hand on top of the counter. I left before the cops arrived. Surprisingly, this was not the first time I saw a Beetlejuice man on Halloween in a fast food restaurant. Beetlejuice is based around the concept of death and the afterlife and the film handles it in a way that is both enthralling and pleasantly cartoonish. This is a movie that doesn’t poke fun at a serious subject…more so that it explores a morbid theme…with a certain childish smirk. And I like the way Tim Burton used to smirk at his audience early on in his career. He was influenced by the energy of those old black and white TV shows like the Addams Family and Dark Shadows and he brought it into a frequency that operates on a higher level.

This is a weird one. I almost want to put a warning before you watch this movie. Beware. It’s dark, it’s twisted, and sometimes it’s depraved. But it’s also beautiful. Sad. Touching. And one of a kind. This is one of those films that you watch and go “How the hell did this make it into production?” and then feel happy that it did. We’ve all seen the countless Taxi Driver remakes and homages about the lonely incel type of character who finds a way to redeem himself. It can feel tedious. But this film does it differently. Bad Boy Bubby needs more recognition. The set design and “mise en scene” is both dark and important. Like a basement.

I have written before about the better film in Vincent Gallos limited filmography as a director Buffalo ‘66 but this film deserves some recognition as well. Putting my internet beef with Gallo aside I respect certain key elements of this movie and certain key elements surrounding this movie. The distinction should be made that Gallo did some things very successfully in the release and marketing of this project. He turned his movie into a meme. Which as stated in my article about Basic Instinct is an impressive thing to do and if done the right way can cement you in culture for a long time. However, it’s unfortunate that unlike Basic Instinct this movie doesn’t have a good enough story or style to transcend the Meme. It can’t live past the moment it is known for. It should have been a short film instead of a winding feature. I bet Vincent Gallo regrets that he made a movie that people think is boring. I bet that at the time Vincent Gallo didn’t think he would mind it that much if people thought his movie was boring. And I bet that he minds it now. Having one explosive moment in a film does not justify the lead up if the lead up is so mundane. You can tell me 100 times that it was your intention to paint the wall brown. I’ll still tell you that it looks like shit. I respect what Gallo was attempting to do here…but I also believe that if he brought the same energy from Buffalo ’66 to the rest of this film…it would have been a better experience for everybody.

Terry Zwigoff is a king at making films about anti-heroes and anti social outcasts. His documentary about R. Crumb is one of the best. So it’s no surprise that he would make a film such as this work out so well. This is another one of those films like Big Trouble In Little China where the odds are clearly stacked against and yet it’s a home run. It goes to show you that it matters who is behind the wheel. If another filmmaker were to handle this material it wouldn’t have turned out the same. Case in point Bad Santa 2. It’s a shame that Terry Zwigoff hasn’t made more films recently. As of right now I have seen all of his movies except for Art School Confidential which is currently on my list. Bernie Mac is excellent in this film and the humor is genuinely funny.

This is a great film and one that aims to capture the legacy and influence of one enigmatic figure Melvin Van Peebles. As Roger Ebert once said “That a big budget action film is unthinkable today without a black co-star is a direct consequence of Sweet Sweetback which proved that a viable market existed for movies made by, for and about African Americans.” This movie recreates this moment in cinematic history and in a meta way none the less. With Mario Van Peebles filling in for the role of his father. This film works because of how personal it feels and the supporting cast which elevates it. I was fascinated the entire time I was watching this movie and I am grateful this exists.

Abel Ferrara is a degenerate king and I love his work. Talk about another king of the anti-heroes. I like the way this film juggles serious thematic issues in a roller coaster filled with addiction, guilt, and sincerity. Harvey Keitel annihilates this role and it is so fun to watch. It’s fun to see a movie about the “crime ridden” days of New York City. This is the film that put Abel Ferrara on the map in a lot of ways. I have yet to watch the sequel with Nicolas Cage. I’ve started that film a dozen times and always turn it off 10 minutes in. I just don’t feel it the same way I feel the original. Bad Lieutenant by Abel Ferrara is a more original piece of work.