“The Great Man Votes” is a simple little film from 1939 starring the late, great John Barrymore in one of his last film roles. There’s nothing particularly deep about this film but I do find myself giving it more thought than it probably deserves.

First of all, I was expecting a film with a stronger political message and was pleasantly disappointed. “Votes” is not the keyword in the title – this is not “Mr. Smith Goes to Washington” despite being released the same year. No, the keyword in the title is “Man,” as this is mostly a character study, albeit a somewhat-shallow one with a noticeable lack of moral, and little to no overall cultural impact.

But there are other interesting aspects of this film that make it worth investigating. First, Barrymore plays an alcoholic (during Prohibition) who was a former academic at Harvard “College” but has since fallen from grace and is now a night watchman at a factory. Over the course of the film, he receives generous offers from the local political machine to effectively buy his vote, but the ramifications of these bribes aren’t fully explored in the film. The fact that the film was shot during Barrymore’s declining years (ironically due to alcoholism) lends his performance a strong degree of realism, tempered by 30s-era decorum and restraint.

His character is almost constantly flanked by his two children, Donald (played by Peter Holden in his only film role), and Joan (Virginia Weidler). The child actors are actually pretty good, very natural and tolerable as child actors go. Weidler is particularly interesting, as the film was made at nearly the mid-point of her career, which began in 1931 at age 4. Her career began to decline after she was overshadowed by none other than Shirley Temple.  She passed away at the age of 41, leaving behind two children of her own.

A joke I was not expecting from a 1939 film: when the bully son of a local political operative gets pushed into a trough of wet cement by Donald, one of the workers quips that “He’s the spittin’ image of his old man.” 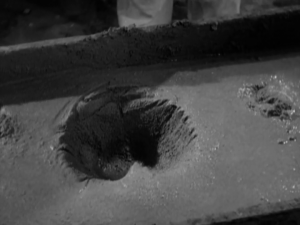 Might be worth a watch, given its 70-minute run time.  Overall grade: straight B.