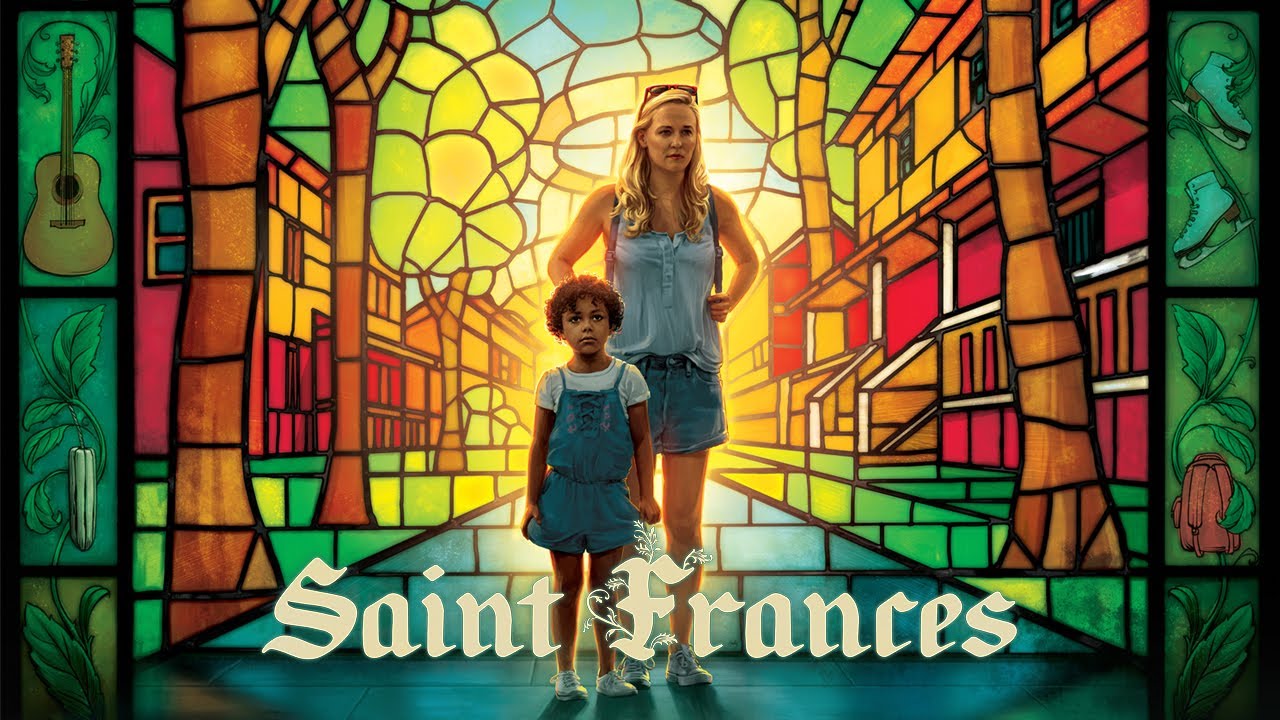 Female bodily functions are on full display in “Saint Frances,” the 2019 film from very talented writer/star Kelly O’Sullivan and director Alex Thompson.  Unexpected menstruation, unplanned pregnancy, abortion, breastfeeding, post-partum incontinence and depression – you name it, it’s in there, and in rather graphic detail.

Saint Frances is the story of Bridget, a somewhat-aimless 34-year-old who works an unfulfilling job as a server in a restaurant.  She gets an opportunity to switch gears and become the almost live-in nanny for a feisty six-year-old girl, Frances, who is the offspring of a lesbian couple, Maya and Annie.  Along the way the couple welcomes a son, Wally, and the plot largely takes a back seat to the characters themselves – which is fine, The Big Lebowski and many other films are little more than powerhouse character studies.

Saint Frances is a really good film.  The characters are richly developed and engaging to watch.  There are no weak performances in the film, even among the more minor characters, and the conversations feel natural for the most part, stutters and awkward pauses included.  Even the child actor playing Frances (Ramona Edith Williams) is believable and effective in her performance, which is rare among child actors.

Saint Frances is also an awful film that doesn’t know who its target audience is.  The central theme of the film is that all womens’ bodies do these really gross and inconvenient things, and women should talk about them more in the hope of normalizing them.  Women do talk about these things, it’s just that some women judge other women for the choices they make, and the film would have been better off emphasizing the judgment rather than the mere discussion of these topics.  The phenomenon of women judging other women does come up in the film, when one woman calls another woman out for breastfeeding in public.  But instead of devolving into a shouting match, these women are miraculously able to come to understand each others’ perspective, “agree to disagree,” and even learn each others’ names.  This is where the film begins to strain our suspension of disbelief.  (Also, I couldn’t help but note the filmmaker elected to not show the breastfeeding on-screen, but kept it below frame.  If they wanted to normalize breastfeeding and desexualize it, they didn’t help their cause by hiding it under a cinematic blanket.)

The other flaw of Saint Frances is its treatment of men.  The first of two partners Bridget hooks up with is Jace, a considerate, level-headed dude who reacts with unflappable calm after Bridget unexpectedly bleeds all over him post-coitus.  But Bridget ghosts him after he wants to talk about his feelings following her abortion, as if he’s not allowed to have an opinion about it despite completely supporting her decision the whole way through the process – he is expected to remain silent and keep his feelings to himself.  The second man she takes on as a lover is Isaac, a middle-aged guitar teacher.  But Isaac is unceremoniously booted from the film after showing signs of both erectile dysfunction and a misunderstanding of female anatomy (a capital sin in a world where “it’s not for men to know” such things in the first place).  Oh, and the fathers of Maya & Annie’s two children?  Unseen and unmentioned.  The film hints at Bridget reconciling with Jace, but this potential goes unfulfilled before the film ends, emphasizing Jace’s irrelevancy.

Okay, so men probably aren’t the target audience for Saint Frances.  But while Saint Frances succeeds in conveying its message of women supporting women, it does so in slightly unbelievable ways, and at the expense of allowing the men in its story to be real men, feelings and all.  I commend Kelly O’Sullivan on her achievement, but the film demonstrates the sad fact that we’ve still got a ways to go.  Overall grade: B