Allow It: Ten Years of Attack the Block

Has it been ten years already? I was only 19 when I saw Attack the Block for the first time. It was at an advanced screening at the Landmark Century Centre. I had never even heard of the film before the screening. It was a purposely overbooked screening so you had to get there early if you wanted to get in. I was with my best mate and we had certainly hoped for a good film but we had no way of knowing. But hey, a sci-fi comedy/horror hybrid sounds fun enough right? Well, let’s just get one thing clear before we go any further: If you don’t want to read a man totally geek out about how much he loves this movie then maybe read a different article. Everyone ok with that?  Everyone good? Ok then…let’s get to it:

Attack the Block is a ten out of ten film. By the end of this article, I will have hopefully explained why I think that is the case. If you haven’t seen Attack the Block yet, maybe I can convince you to check it out. If you finally check it out and think I overhyped it, well, frankly that’s your problem. I’m just going to talk honestly about how much I adore this film. I’ve seen this film at least five different times now and it packs a punch every single time. I remember the rush my friend and I felt walking out of that screening. You ever see a small movie that you’ve never heard of and it blows you away? That was (and still very much is) Attack the Block.

Oh wow. Where are my manners? I haven’t even told you what the film is about. Attack the Block centers on a group of teenagers living in inner city London (a place the characters call “the ends”). When we first meet them, they are mugging a woman named Sam (Jodie Whittaker). The leader of the group is Moses (John Boyega). There’s also Pest (Alex Esmail), Jerome (Leeon Jones), Dennis (Franz Drameh), and Biggz (Simon Howard). Unbeknownst to both parties, Moses is robbing one of his new neighbors. You see they live in a building called Wynndham Tower but they refer to it as “the block.” As the mugging takes place, something from the sky crashes down on the street. Upon investigation, it looks extraterrestrial and it is not friendly. The boys and Sam better get ready because that’s not the only alien coming to the block tonight. As the film’s tagline proclaims, it’s going to be a battle of “inner city versus outer space.” 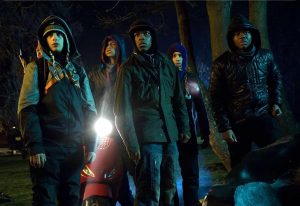 You may have noticed some familiar names when reading that synopsis. Jodie Whittaker has recently had a run as the titular doctor on the legendary British series Doctor Who. There’s also Franz Drameh who has appeared in Edge of Tomorrow and plays Firestorm on the various CW superhero shows. There’s also good ol’ reliable Nick Frost as Ron, the block’s premier weed dealer. But probably the biggest name you may have noticed is of course John Boyega. Long before he did battle with the dark side in the most recent Star Wars films (or win a Golden Globe like he did this year), he was making his feature film debut. If this was the film that got Disney’s attention, I can see why.

Now, at the start of the film, you may think, “wait, these are our protagonists”? And sure, mugging someone isn’t a great first impression. However, by the end of the film, I was absolutely rooting for these blokes. The five actors (most of them also making their feature film debut) work so well together and have such an entertaining rapport with each other. You can feel the friendship and loyalty within this group. This is not one of those cases where the dialogue in a teenager movie is obviously written by somebody well past their teens. The banter these kids make is constant and rather entertaining. Boyega, as I said before, plays Moses asa natural born leader. If there is a standout in terms of comedy, Alex Esmail as Pest undoubtably deserves that mention. Pest is a character that consistently made me laugh throughout and he has some of my favorite lines in the whole film.

This is a film that I can’t imagine had that big of a budget. Yet, you wouldn’t know that watching it. First off, the aliens’ design is a big animal completely covered in pitch black fur. The only light you can see is its glowing rows of teeth (or, as the characters in film describe them, they’re “big gorilla wolf motherf***ers). It’s a pretty creative design. You see a few of those beasts running at you and you’d run back to the block too. Also incredibly impressive is the score by Steven Price and the group Basement Jaxx. This was around the time where Daft Punk did the soundtrack for Tron: Legacy and The Chemical Brothers did the soundtrack for Hanna (another great film turning ten this year). Hollywood, please keep this trend of employing electronic bands going. This score kicks serious butt. I seriously dare you to not feel pumped up or at least smile while listening to the ending track of this film. It does what every cinematic score should do: it gives the visuals that extra kick of excitement and emotion.

Oh my god! I lost my manners again. I haven’t even mentioned the film’s director. The film is the feature film debut of Joe Cornish. Cornish was mostly known as a writer before this (it’s him who wrote the film’s screenplay). Well Joe, way to knock it out the park on your first try. Attack the Block is a joyous mix of genres really. It’s a good low-key alien invasion film. It’s also a funny and distinctly British comedy. And, even through the laughs, it still manages to have tense action as well as some horror movie gore to it. This film is executive produced by the one and only Edgar Wright and you can see the similarities (not just in the casting of Nick Frost). Both Cornish and Wright’s work have a fun vibe to them but they don’tskip the character drama. Whether it’s Shaun of the Dead or Attack the Block, both films make you care about the characters because they explore their relationship to each other. It just so happens that they have heavy genre elements to them. 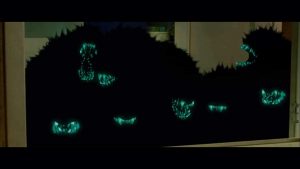 There was only one film in 2011 that I thought was better than Attack the Block (that film being the MMA drama Warrior.) How in the hell this only has a 6.6 (out of 10) user rating on IMDB is way beyond me. Like its lead teens, Attack the Block may have a hard exterior. However, spend some time with it and you’ll simply have a blast. We’ve had it for ten years already. I’d say it’s extremely likely I’ll watch it some more times in the next ten years to come. Every time I get to those end credits, I feel charged up. I feel like I need to tell everybody about this special little film. It’s been ten years and it still holds up. Attack the Block is nothing short of being absolutely fantastic.