Aaron Sorkin Strikes Again with “The Trial of the Chicago 7”

The Trial of the Chicago 7 is, from top to bottom, a beautiful film.

Aaron Sorkin has always been a master of dialogue – he once described in an interview the day his parents took him to see Edward Albee’s Who’s Afraid of Virginia Woolf? at nine years old, and how thereafter the way words sounded together in a sentence phonetically was just as important to him as what they meant. Of course, Sorkin has achieved worldwide recognition as he went on to create The West Wing, The Social Network, The Newsroom, even more recently a Broadway adaptation of Harper Lee’s classic To Kill a Mockingbird. Any among us familiar with these works of art know that Sorkin’s characters talk a mile a minute, constantly cutting each other off in order to get all the necessary information from the page to the screen. This tic of Sorkin’s can be irritating, until you remember that the man behind the words is so intelligent and keenly aware of current events that there is no choice – the pace of speech is simply essential in order to reflect the perspectives Sorkin observes around him. It’s no wonder his portrayals of politicians and lawyers are so spot-on. 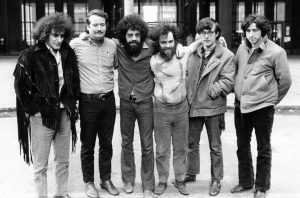 The Trial of the Chicago 7 is no exception to Sorkin-style historical drama. The film tells the true story of a group of anti-Vietnam War activists and the trial brought against them for conspiring to incite riots at the 1968 Democratic Convention. The activists were all charged for various actions, when in fact they had simply organized a peaceful protest, informed Chicago city officials on multiple occasions of the dates and times it would occur, and requested assistance to keep things under control (which was denied). As the trial’s proceedings take part interspersed with footage of the real-life events, it’s impossible not to pause the film in anger and disbelief, collect yourself, and sob your way through the next half-hour chunk. The first thought that comes to mind is that it is incredibly timely after the Trump administration’s handling of Black Lives Matter protests in the summer of 2020 once again sparked outrage and cries for equality around the globe. The thought itself, however, that The Trial of the Chicago 7 is a timely piece of art, intrinsically relays the film’s message – this has always been the way that it is, and we have not improved as a society when it comes to equal rights – only gotten better at tricking ourselves into thinking we have.

I don’t think anyone can argue that Sacha Baron Cohen is captivating, whether that’s a positive or negative, in any film he chooses to appear in. This is no exception – his portrayal of Abbie Hoffman is unpredictable, honest, and charmingly human. Hoffman’s personality and approach to progressive politics stands in stark contrast to Tom Hayden’s, who in the film is portrayed by Eddie Redmayne. Perhaps it is a personal bias as I seem to find Redmayne’s performances less stellar than the rest of the world across the board, but Hayden was the only character (at least, the only character with a heart and/or conscience – looking at you, Judge Julius Hoffman) I had trouble trusting and believing in. The rift between Hoffman and Hayden presents the very real growing divide between the usual elected Democrat leadership (Biden, for example) and the far more progressive Dems who are fed up with the “listen to each other and work together” rhetoric (Bernie, Warren, Alexandria Ocasio-Cortez) and are ready to fight for real change at any cost, the way their conservative counterparts do. It also bothers me that Hayden is portrayed just slightly as the film’s *true* lead – and this may be due to Hayden’s real-life position, Redmayne’s star status, or any combination of factors – and the result is the implication that progressive politics are only recognized with validity when they are spoken from the mouths of moderates.

Though I’m a great fan of The Trial of the Chicago 7 and it hit me very deeply, I would challenge those of us that desperately want to praise the film as timely, prompt, fitting to current events, etc., to refrain from doing so in the service of keeping The Trial of the Chicago 7 from turning into nothing more than Oscar bait. Though the film will make history with its list of nominations for its deserving cast, it’s important to remember what the film is actually telling us. This is not escapism – yes, it’s beautifully written, directed, and performed, but as brilliant as Aaron Sorkin is, he is still a successful white man at the end of the day. We need to pay just as much attention to stories of social justice that are written, directed, produced –  created by those experiencing the injustice.