20 Years of Requiem for a Dream

I am writing this article on December 15th 2020.That means twenty years ago, to the day, a masterpiece was released into U.S theaters. What can be said about Requiem For a Dream that hasn’t already been said? It’s powerful? It’s upsetting? It’s one of the most distressing movies released in the last several decades? Yes. All of that and more. Yet, I’m making it sound terrible. Why would you watch such a harrowing film? It’s because Requiem for a Dream is worth the distressing journey. Here is a movie that excels at every level. Acting. Editing. Direction. Cinematography. The film is always inventive in the way it presents its material.

If you’ve never heard of Requiem for a Dream, let me give you a quick rundown. The film follows four characters: There’s Sarah Goldfarb (Ellen Burstyn), her son Harry (Jared Leto), Harry’s girlfriend Marion (Jennifer Connelly), and their friend Tyrone (Marlon Wayans). Sarah is a widow who consumes copious amounts of television. Harry and Marion are a couple completely infatuated with each other. Marion is interested in fashion and they talk about opening a clothing store for her designs. Tyrone and Harry are close (some would say even best) friends. They have a plan to sell a product and move up in the world. The only problem is that that product is heroin.

Yes, Harry, Marion, and Tyrone are all addicted to the drug. Sarah, meanwhile, is trying to lose weight so she can fit into a red dress she wore at Harry’ high school graduation (her late husband was very fond of it). When she gets a call to be on a TV show she religiously watches, she has an even bigger drive to fit into the dress. Diet books aren’t doing it though so she goes to the doctor and gets prescribed diet pills. Soon all four characters will learn how far addiction will take them. 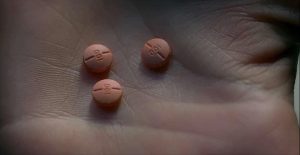 The effect of the film is something similar to the films of British director Steve McQueen.McQueen directed 2011’s sex-addiction-drama Shame as well as the 2013 Best-Picture-winner 12 Years a Slave. After both those films, I felt emotionally drained. Michael Fassbender’s character in Shame is much like the characters in Requiem in that both their lives revolve around getting their fix. Addiction doesn’t care about their pride or dignity or well-being. It just wants you to feed it no matter what. I’ve only seen Shame and 12 Years a Slave once (both back when they were released in theaters). However, it’s been enough years that I would experience them all over again. That’s how good of films they are. I feel the same way about Requiem.

When talking about this movie, you have to mention threethings: the editing, the score, and the acting. Ellen Burstyn is unbelievable as Sarah. There’s a reason she was nominated for an Oscar for this role. She has a monologue here about loneliness that absolutely guts me every time. The mental decline of Sarah is one of (if not the) hardest thing to watch in this movie. Her journey starts innocently enough but soon come the cravings and the hallucinations. Burstyn brings it all to terrifying light. Let me also give a hand to Marlon Wayans because this is obviously not his usual role. Yet, lo and behold, he delivers a truly captivating dramatic performance.

When talking about the editing and the score, it’s true that both are responsible for a lot of the impact the film has. The recurring musical theme here got stuck in my head and wouldn’t go away. It’s melodic but also captures the dour nature of the film. It’s haunting and iconic. The strings during the final scenes of the movie are so intense they’re practically assaulting you. The editing too is so unique to this film. Even in quiet scenes like when Harry and Marion are lying in bed together, the scene really makes you feel like you are there with them. Simple scenes like that have a nice creative visual flair to them. Yet, in other times, the editing is used at such a quick pace that you yourself feel like you’re on drugs.

I remember the first time I saw this film. It was either my junior or senior year of college. I had gone out to dinner with my dad. When I came back, I checked in to see what some friends were doing. They were watching a movie (as film school students are known to do). I went over and found out they were watching Requiem for a Dream. I thought, “Oh man. This movie’s reputation precedes it.” I sat down and watched the last hour of the film. The film hooked me. It grabbed me. I am not joking when I say the last 15 minutes of this film left me literally shaking. Yes, I know how hyperbolic that sounds but it’s true.

It wasn’t until earlier this year during lockdown that I decided to watch the whole thing. Just so you know, the film is still just as devastating the second time around. For those who haven’t seen it, it probably sounds like a glorified after-school special. Believe me, if after-school specials were anything like this film, not one kid in that class would touch heroin. The film is a build-up much like addiction itself. It starts off odd and you see flashes of an oncoming problem here and there. After awhile the feeling of your fix becomes a regular habit. Soon things become so bad that you can’t imagine your life without this feeling. The film has this structure as there are nice moments in the beginning but it’s hell coming out. Hey, it’s called Requiem for a Dream for a reason.

Here is where I have to give respect to director Darren Aronofsky (I can’t believe I’ve gone this long without mentioning him). The direction by Aronofsky and cinematography by Matthew Libatique is exceptional. Like I said earlier, you feel like you are there with these characters. There moments when you are placed in front of Marion or Tyrone’s head and see their world from that perspective (it’s like that drunk Harvey Keitel scene in Mean Streets). There are also moments captured with a fisheye lens to try and convey how warped Sarah’s mind has become. It’s little touches like that that make the film standout.

I’ve seen three other Arfonofsky films. There’s The Wrestler (2008), Black Swan (2010) and mother! (2017). Mother! I can take or leave but Black Swan and especially The Wrestler are great (seriously, go watch The Wrestler). Yet they still don’t reach as high as Requiem for a Dream. There are certain directors who have made a film so good that I doubt they will be able to duplicate that success. I’m talking about Christopher Nolan with Inception or David O. Russell with Silver Linings Playbook or Quentin Tarantino with Pulp Fiction. Now you can add Darren Aronofsky to the list with Requiem for a Dream. You may never want to experience this film again after your first watch and I wouldn’t blame you. It is indeed a bleak and rough film. But personally speaking, I admire this film way too much to just leave it at one viewing. Maybe give me a little time but I’ll back. As it stands today, I wish it a happy anniversary! Here’s looking to Arfonofsky’s next project! 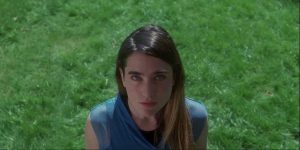