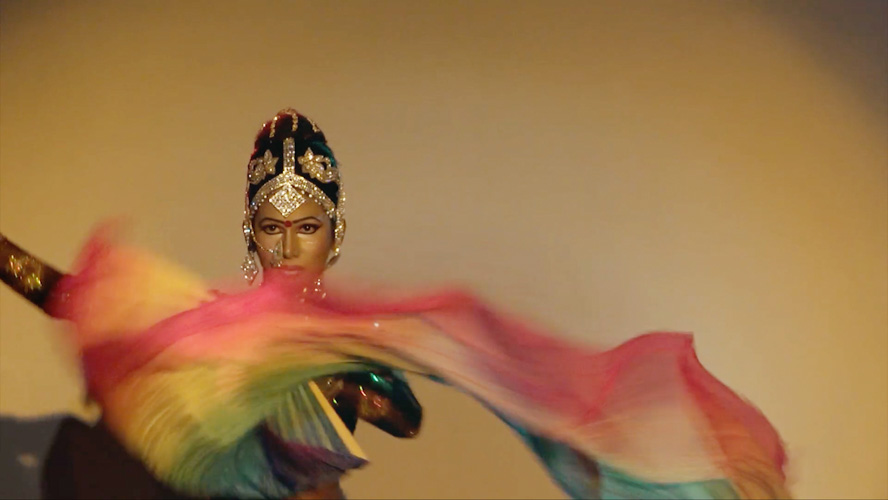 Michalina Mrozek’s documentary 10/01 Queer Nights follows a trans troupe as they prepare a de-orientalized dance performance in Berlin, Germany.  10/01 Queer Nights opens with the following Edward Said quotation, “Orientalism is the Western attitude that views Eastern societies as exotic, primitive, and inferior.  Basically, an Orientalist mindset centers the Western (European/American) world and views the Eastern world as the Other,” establishing that this film is not only about the difficult life of a refugee trans person in Europe, but that this film also celebrates resilient trans folx who succeed at completely starting over in a new country where there is a supportive gay culture and community.

This short includes interviews with the troupe members, and the first interview is with a 22-year-old man called Adrian Rafie who has on a pink bandana and pink lipstick.  In his interview Adrian says, “I change whatever I can, I even chose my own name.”  While he shares his reason for leaving a suburb of Urmia, Iran, we see images of Adrian transformed into a woman wearing makeup and a black wig.  Adrian calmly explains, “But small towns don’t have any space for us.”

As we watch the rest of the interviews, we slowly come to understand whom Adrian means  by “us.”  After Adrian, we meet a Nigerian womxn named July who spoke about hiding their gayness in order to be more masculine for family, and there’s an Iranian non-binary lesbian Mona who declares, “I’m not a man and not a woman.  Now if later I do hormone therapy, I still don’t want to be man or woman.  I’m Mona without gender.”  (Mona was my favorite interviewee, and I’ve got a bit of a crush there…)  As the interviews continue and the personal stories reveal deep complexity, every dancer eventually says they are happier in Berlin than they were in their home country of Iran, Nigeria, Malaysia, or Russia.

The interviews set us up to make sense of the final dance performance as a visual message of sexual resurrection in the medium of movement ‒ movement between countries; movement between genders or to the absence of gender; movement to safer and happier lives.  The journeys these troupe members share with viewers become the linear notes that map out their movements across the dance floor at the end of Mrozek’s documentary, which was too short.  I would gratefully welcome a follow-up documentary in a year, to cinematically stay in touch with these cool courageous folx.

Perhaps the potency of this dance project comes from the fact that there was no soundtrack, and there was no steep dramatic climax, despite the aspects of fear and gravity involved in each person’s journey.  (Temilov Nikita fled Russia weeks after the murder of activist Yelena Grigoryeva ‒ because death threats began to be painted onto Nikita’s family home.)  10/01 Queer Nights is a low-budget doc without glitz, and without any complaining.  In fact, at one point, Adrian speaks about his love for his homeland Iran.  10/01 Queer Nights is mellow yet mighty and meaningful.  I learned a lot, and I appreciated that Michalina Mrozek and her team made this film respectfully observing the lives of trans survivors.